Hafnium (chemical symbol Hf, atomic number 72) is a lustrous, silvery gray metal. Chemically, it resembles zirconium and is found in zirconium minerals. It is used in tungsten alloys in filaments and electrodes and also acts as a neutron absorber in control rods in nuclear power plants. 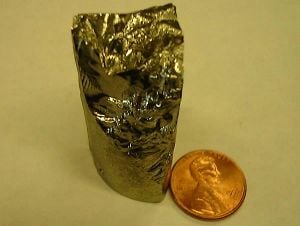 Hafnium is found combined in natural zirconium compounds but it does not exist as a free element in nature. Minerals that contain zirconium, such as alvite [(Hf, Th, Zr)SiO4 H2O], thortveitite and zircon (ZrSiO4), usually contain between one and five percent hafnium. Hafnium and zirconium have nearly identical chemistry, which makes the two difficult to separate. About half of all hafnium metal manufactured is produced by a byproduct of zirconium refinement. This is done through reducing hafnium(IV) chloride with magnesium or sodium in the Kroll process.

Hafnium (Latin Hafnia for "Copenhagen," the hometown of Niels Bohr) was discovered by Dirk Coster and Georg von Hevesy in 1923 in Copenhagen, Denmark. Based on the Bohr Theory, this element was predicted to be associated with zirconium, and it was finally found in the mineral zircon through X-ray spectroscopic analysis performed in Norway.

This metal was separated from zirconium through repeated recrystallization of double ammonium or potassium fluorides by Jantzen and von Hevesey. Metallic hafnium was first prepared by Anton Eduard van Arkel and Jan Hendrik de Boer by passing tetraiodide vapor over a heated tungsten filament.

The Faculty of Science of the University of Copenhagen uses a stylized image of hafnium in its seal.

Hafnium is a transition metal that lies in period six of the periodic table, between lutetium and tantalum. In addition, it is located in group four (former group 4B), just below zirconium. It is ductile and corrosion resistant, and its chemical properties closely parallel those of zirconium. The properties of hafnium are markedly affected by zirconium impurities and these two elements are amongst the most difficult to separate. The only notable difference between them is their density—zirconium is about half as dense as hafnium.

This metal is resistant to concentrated alkalis, but halogens react with it to form hafnium tetrahalides. At higher temperatures hafnium reacts with oxygen, nitrogen, carbon, boron, sulfur, and silicon. Hafnium carbide is the most refractory binary compound known, and hafnium nitride is the most refractory of all known metal nitrides, with a melting point of 3310 °C.

The nuclear isomer Hf-178-m2 is also a source of cascades of gamma rays whose energies total to 2.45 MeV per decay. It is notable because it has the highest excitation energy of any comparably long-lived isomer of any element. One gram of pure Hf-178-m2 would contain approximately 1330 megajoules of energy, the equivalent of exploding about 317 kilograms (700 pounds) of TNT. Possible applications requiring such highly concentrated energy storage are of interest. For example, it has been studied as a possible power source for gamma ray lasers.

Hafnium is used to make control rods for nuclear reactors because of its ability to absorb neutrons (its thermal neutron absorption cross-section is nearly 600 times that of zirconium), excellent mechanical properties, and exceptional corrosion-resistance.

Care needs to be taken when machining hafnium because when it is divided into fine particles, it is pyrophoric and can ignite spontaneously in air. Compounds that contain this metal are rarely encountered by most people and the pure metal is not normally toxic but all its compounds should be handled as if they are toxic (although there appears to be limited danger to exposed individuals).