Zirconium (chemical symbol Zr, atomic number 40) is a strong, lustrous, gray-white metal that resembles titanium. It is obtained chiefly from the silicate mineral zircon and is highly resistant to corrosion.

The purified metal is primarily used by the nuclear industry to form the outer layer of fuel rods in nuclear reactors. Zirconium is also used in corrosion-resistant piping, heat exchangers, and lamp filaments. Impure zirconia (zirconium oxide) is used for heat-resistant materials, such as for furnaces and laboratory crucibles, and purified cubic zirconia is used as a low-cost substitute for diamonds. Alloys of zirconium are used for medical implants and prosthetic devices. Its alloy with niobium is superconductive at low temperatures. Also, zirconium-aluminum alloys are used to make high-strength bicycle frames and lacrosse sticks. 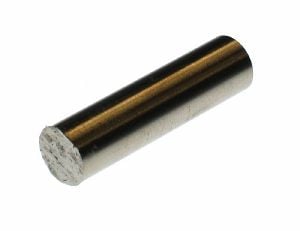 In nature, zirconium is found combined with other elements but has never been found as a free metal. The principal economic source of zirconium is the mineral zircon (zirconium silicate, ZrSiO4), deposits of which are located in Australia, Brazil, India, Russia, and the United States. Upon extraction, it appears as a dark, sooty powder, or a gray, metallic, crystalline substance. Zirconium and hafnium are contained in zircon at a ratio of about 50 to 1 and are difficult to separate.

This element is also abundant in S-type stars and has been detected in the Sun and meteorites. Lunar rock samples brought back from several Apollo program missions to the Moon have a high content of zirconium oxide relative to that in terrestrial rocks.

Zircon is a co-product or byproduct of the mining and processing of heavy mineral sands for certain minerals of titanium (ilmenite and rutile) and tin. Zirconium is also in 30 other recognized mineral species including baddeleyite. This metal is commercially produced by reducing zirconium(IV) chloride with magnesium in the Kroll process, and by other methods. Commercial-quality zirconium retains a content of 1–3 percent hafnium.

Commercial zirconium naturally contains 1-5 percent of hafnium, and it is extremely difficult to separate these two elements from each other. Nonetheless, for applications in nuclear reactors (see below), zirconium needs to be prepared free of hafnium contamination. Two main processes are used for this purpose: liquid-liquid extraction, used mainly in United States, and extractive distillation, used primarily in Europe. The resulting reactor-grade zirconium is about ten times as expensive as the hafnium-contaminated commercial grade. The separated hafnium is used for control rods. The zirconium is used mostly almost pure, in the form of low alloys, most often from the zircaloy group.

Zirconium (Arabic zarkûn, from Persian zargûn زرگون, meaning "gold like") was discovered in 1789 by Martin Heinrich Klaproth and isolated in 1824 by Jöns Jakob Berzelius.

The mineral zircon, or its variations (jargon, hyacinth, jacinth, or ligure), can be found in biblical writings. The mineral was not known to contain a new element until Klaproth analyzed a jargon from Sri Lanka in the Indian Ocean. He named the new element Zirkonertz (zirconia). The metal was isolated in an impure form by Berzelius, who heated a mixture of potassium and potassium zirconium fluoride in a small decomposition process conducted in an iron tube. Pure zirconium was first prepared in 1914.

The crystal bar process (or Iodide process), developed by Anton Eduard van Arkel and Jan Hendrik de Boer in 1925, was the first industrial process for the commercial production of pure, ductile, metallic zirconium. It was superseded by the Kroll process.

Zirconium is a transition metal that is located in period 5 of the periodic table, between yttrium and niobium. In addition, it lies in group 4 (former group 4B), between titanium and hafnium, and is closely associated with these two elements.

This metal is grayish-white, lustrous, strong, and exceptionally resistant to corrosion. It is lighter than steel, and its hardness is similar to that of copper. When finely divided, the metal can spontaneously ignite in air, especially at high temperatures. (It is much more difficult to ignite the solid metal.) An alloy of zirconium and zinc becomes magnetic at temperatures below 35 K. The oxidation state of zirconium is usually +4, although it may also occur in oxidation states of +3 and +2. 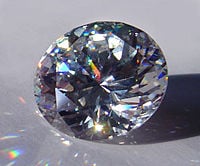 Compounds containing zirconium are not noted for toxicity. The metal dust can ignite in air and should be regarded as a major fire and explosion hazard. Zirconium has no biological role.

Retrieved from https://www.newworldencyclopedia.org/p/index.php?title=Zirconium&oldid=1044033
Categories:
Hidden category:
This page was last edited on 16 October 2020, at 17:51.
Content is available under Creative Commons Attribution/Share-Alike License; additional terms may apply. See Terms of Use for details.