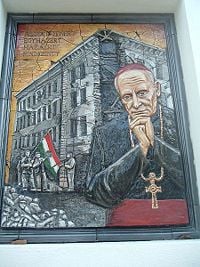 Cardinal József Mindszenty (March 29, 1892 - May 6, 1975) was the head of the Roman Catholic Church of Hungary during the Cold War, whose trial and imprisonment become an international symbol of brutal Stalinist persecution.

An opponent of both Fascism and Communism, he was elevated to the College of Cardinals by Pope Pius XII on February 18, 1946. After he refused to permit the Catholic schools of Hungary to be secularized, the Communist government arrested him on charges of treason. Sentenced to life imprisonment in 1949 after a show trial tainted by a coerced confession, his conviction generated world-wide condemnations. He remained in prison until the Hungarian uprising of 1956 and later sought asylum in the U.S. embassy in Budapest, where he remained for another 15 years.

Despite struggles with the Vatican, which sought to improve relations with the Soviet bloc during the pontificate of Pope Paul VI, Mindszenty remained a popular figure throughout the Catholic Church after his release. Today, he is widely considered as a possible candidate for future sainthood. 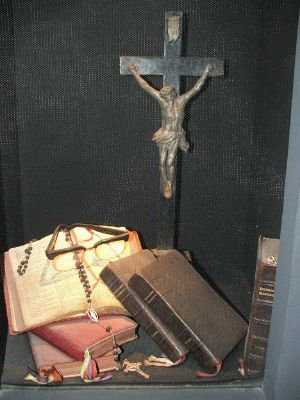 Some of Mindszenty's personal belongings.

Mindszenty was born József Pehm on March 29, 1892, in Csehimindszent, Austria-Hungary. He became a priest on June 12, 1915. In 1917, the first of his books, Motherhood, was published. This theme would be a persistent one in his theology, and he later penned a work entitled The Face of the Heavenly Mother, published in English in 1951.

Mindszenty also showed an interest in politics and an opposition to totalitarianism early in his career. He was arrested under the socialist Mihály Károlyi government on February 9, 1919, and remained in prison until the end of the Communist Béla Kun regime on July 31 of that year.

He adopted his new name, Mindszenty—taken from the last two syllables of the name of his home village—in 1941. He also joined the Independent Smallholders' Party in this period, in opposition to the fascist Arrow Cross Party. On March 25, 1944, he was consecrated bishop of Veszprém, considered a distinguished post because the town traditionally belonged to the queens of Hungary. With Hungary under fascist control, he was arrested on November 26, 1944, for his opposition to the Arrow Cross government, and charged with treason. In April 1945, he was released from prison.

Church leader and opposition to communism

On September 15, 1945, Mindszenty was appointed Primate of Hungary and Archbishop of Esztergom, the seat of the head of Hungary's Roman Catholic Church. On February 18, 1946, he was elevated to the office of cardinal by Pope Pius XII and associated with the titular church of Santo Stefano Rotondo in Rome.

The new Communist government of Hungary proved to be no more amenable to Mindszenty than the previous fascist government had been. It banned religious orders and attempted to secularize Hungary's many Catholic schools, policies Mindszenty strongly resisted. On December 26, 1948, Mindszenty was arrested and accused of treason, conspiracy, and offenses against the current Soviet-inspired laws of Hungary. Knowing of the possibility of his arrest, he earlier wrote a note to the effect that he had not been involved in any conspiracy and that any confession he would make would be the result of duress. 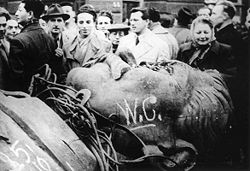 Hungarians rejoice after toppling a huge statue of Stalin during the Hungarian Revolution of 1956.

While Mindszenty was in prison, he was relentlessly tortured in order to coerce a confession for "crimes against the state." His trial began on February 3, 1949. On February 8, Mindszenty was sentenced to life imprisonment for treason. The Communists released what they called a "Yellow Book," a listing of confessions extorted from Mindszenty, including a declaration that the note written about statements made under duress should be considered null and void.

The trial produced a world-wide outcry as a transparent violation of human rights. On February 12, 1949, Pope Pius XII announced the excommunication of all persons involved in the conviction of Mindszenty. In his apostolic epistle Acerrimo Moerore, the pope publicly expressed his solidarity with the suffering Hungarian Church and condemned the mistreatment and jailing of Mindszenty. Among Catholics, Protestants, and non-Christians alike, the cardinal had become an international symbol of opposition to Communist totalitarianism.

During the Hungarian Revolution, Mindszenty was released from prison on October 30, 1956, and returned to Budapest the next day. On November 2, he praised the insurgents, and on the following day he made a radio broadcast in favor of recent developments.

Confinement at the U.S. embassy 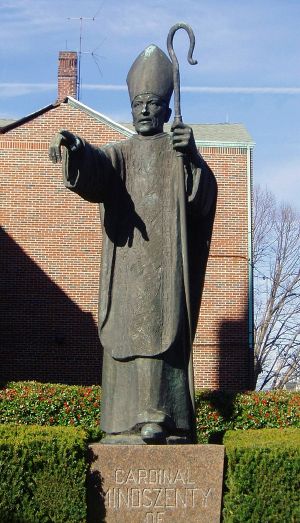 When the Soviets invaded Hungary again on November 4, Mindszenty sought democratic leader Imre Nagy's advice and was granted political asylum at the U.S. embassy in Budapest. He lived for the next 15 years in the U.S. embassy, at first because he faced immediate arrest if he left, and later because he refused to leave the country until the Hungarian government rescinded his conviction.

Mindszenty continued to be an international symbol of opposition to Communist brutality. His life and battle against the Soviet domination of Hungary and Communism were the subject of the 1950 film, Guilty of Treason, based in part on his personal papers and starring Charles Bickford as the cardinal. Numerous books, articles, and even comic books were published about his struggle throughout the 1950s and 1960s.

His status as a prisoner of conscience, meanwhile, was becoming an embarrassment to the Vatican, which sought to improve relations with the Hungarian government. Mindszenty's presence also inconvenienced the U.S. government, because the Budapest embassy was already overcrowded, his quarters took valuable floor space, and a permit for expansion could not be obtained from the Hungarian authorities unless the primate was expelled. Eventually Pope Paul VI offered a compromise declaring Mindszenty a "victim of history" (instead of a victim of Communism) and annulled the excommunication imposed on those Catholics who had cooperated in the persecution of the cardinal. Mindszenty finally exited the embassy area on September 28, 1971.

After a brief stay at the Vatican, he settled in Vienna, Austria, as he took offense at Rome's advice that he should resign from the primacy of the Hungarian Catholic Church in exchange for a Vatican-backed uncensored publication of his memoirs. Mindszenty continuously denied rumors of his resignation and pointed out that he was not canonically required to step down. In a visit to the United States in 1973, Mindszenty publicly thanked the U.S. government for supporting his efforts against Communism and gave his blessing to several anti-communist groups such as the Hungarian Freedom Fighters, the Freedom Leadership Foundation, and the Catholic group named in his honor, the Cardinal Mindzenty Foundation.

With tensions between the cardinal and the Vatican becoming increasingly more apparent, Mindszenty was stripped of his titles by Pope Paul VI in December 1973, at the age of 82. The pope declared the Hungarian cardinal's seat officially vacated, but declined to fill the seat while Mindszenty was still alive. Mindszenty died in exile in Vienna on May 6, 1975, at the age of 83. In 1991, his remains were repatriated to Esztergom by the newly democratically-elected government and buried with honor in the basilica there. 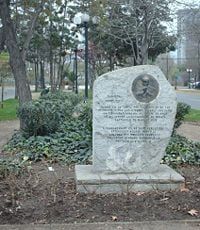 Memorial to Mindszenty in Santiago, Chile.

Mindszenty's trial is considered one of the classic examples of a "show trial" based on a forced confession by Soviet authorities during the Stalinist years. Instead of exposing him as a "counter-revolutionary," it became a rallying point of opposition for the Hungarian emigre community and human rights groups throughout the early years of the Cold War.

In 1976, Pope Paul VI appointed bishop László Lékai to be the primate of Hungary, ending a long struggle with the Communist government. Lékai, not unexpectedly, turned out to be quite cordial toward the Hungarian government.

Mindszenty's contemporary detractors point out that he continued to use the feudal title of prince-primate even after the Hungarian parliament outlawed the use of noble titles. Like the rest of the Catholic hierarchy of the time, he did not believe in a separation of church and state and fought fiercely against secularization of church-run primary and secondary schools.

Despite his conservatism, however, Mindszenty remains a potent symbol of opposition to Nazism and Communism, and a great example of resistance to the totalitarian repression of religious freedom. Today, he is widely admired in Hungary, and even his critics admit his courage in opposing the Nazi regime, his efforts on behalf of the persecuted Catholic Church during the Stalinist era, and his resolve during his confinement.

In Esztergom, his life is commemorated at the Christian Museum's Mindszenty Memorial Exhibition, and several other monuments are dedicated to him in other locations in Hungary. A commemorative statue of Mindszenty stands at St. Ladislaus Church in New Brunswick, New Jersey on Somerset Street. He is also remembered in Chile, with a memorial in the same park (Parque Bustamante) in which a monument to the martyrs of the 1956 Hungarian Revolution stands.

His beatification and eventual canonization has been on the agenda of the Hungarian Catholic Church ever since Communism fell in 1989. The pontificate of Pope Benedict XVI is seen by many analysts as representing an outstanding opportunity for Mindszenty to be recognized as a saint, since the pope has commented favorably on Mindszenty's calling.