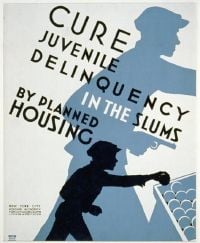 1936 poster promoting planned housing as a method to deter juvenile delinquency, showing silhouettes of a child stealing a piece of fruit and the older child involved in armed robbery.

Juvenile delinquency refers to criminal acts performed by juveniles. Juveniles are capable of committing serious crimes, yet as they are still legally children, the way of dealing with them cannot be the same as with adult members of society, who are fully responsible for their own actions. Most legal systems prescribe specific procedures for dealing with juveniles, such as juvenile detention centers. Efforts are made to identify potential delinquents at an early age so as to provide preventive treatment. However, this has led to controversy as such youth are branded as delinquent without committing any offense.

Generally the approach taken with juvenile offenders is that they be treated more in terms of reform than punishment. Thus probation, or suspended sentencing, is common. When the offender fails to meet the standards or norms prescribed, though, the state mandates a stricter regime, often in an institution which may be termed a "reform school." The hope is that youth can be rehabilitated prior to reaching adulthood, and thus become successful contributors to society. Unfortunately, success is not guaranteed, and many learn more deviant ways leading to a life of adult crime. Successful education of all youth requires more than discipline and laws; it requires the love of parents or other adults who can take responsibility for the child materially, socially, and spiritually. Without the loving care and guidance of good parents, all people are in some sense juvenile delinquents, not fully matured as members of a society in which they fulfill their potential as individuals and offer their abilities and talents for the sake of others to the benefit of all.

Juvenile delinquency may refer to either violent or non-violent crime committed by persons who are (usually) under the age of eighteen. There is much debate about whether or not such a child should be held criminally responsible for his or her actions. There are many different inside influences that are believed to affect the way a child acts both negatively and positively, some of which include abandonment, social institutions, and peer pressure. Children abandoned by one or both parents often have no positive role models and lack the emotional and financial support necessary to succeed in society, making them lash out at their surroundings. Some are raised in dangerous or inappropriate social institutions such as failing schools or are encouraged by membership in gangs. Related, but often separate from gangs, is the issue of peer pressure. The awkward stage of adolescence often sees children perform actions in an attempt to fit in with their peer group. These actions are often illegal and ill-judged.

Many argue that juveniles should be treated differently than adults because they are often not in control of their environment. They have no control over the families into which they were born, the neighborhoods into which they were thrust, the schools they attended, the persons they met and associated with in the schools and community, nor the things that they learned.[2] However, many states continue to consider juveniles second-class citizens even though conditions have improved to where juveniles are no longer considered simply property to be disposed of at will.

One of the most notable causes of juvenile delinquency is fiat—the declaration that a juvenile is delinquent by the juvenile court system without any trial, and upon finding only probable cause. Many states have laws that presuppose the less harsh treatment of juvenile delinquents than adult counterparts’ treatment. In return, the juvenile surrenders certain constitutional rights, such as a right to trial by jury, the right to cross-examine, and even the right to a speedy trial. Notable writings by reformers such as Jerome G. Miller show that very few juvenile delinquents actually broke any law.[3] Most were simply rounded up by the police after some event that possibly involved criminal action. They were brought before juvenile court judges who made findings of delinquency, simply because the police action established probable cause.

Social control theory, such as that developed by Travis Hirshi, suggests that illegal behavior occurs spontaneously as a result of social interaction. Similarly, the self-control theory of crime, often referred to as the General Theory of Crime, developed by criminologists Travis Hirschi and Michael Gottfredson suggests that lack of individual self-control is the main factor behind criminal behavior. This theory suggests that any fraudulent or violent behavior is in pursuit of self-interest.[4]

Hirschi believes that young people who use drugs and commit crime do so because they lack self-control. He suggests that lack of self-control is the result of poor parenting and families that are unable or unwilling to monitor their child's behaviors.

Social control theory proposes that exploiting the process of socialization and social learning builds self-control and can reduce the inclination to indulge in behavior recognized as antisocial. The four types of control that can help prevent juvenile delinquency are:

Robert K. Merton has described a relationship between poverty and crime. He has suggested that there are institutionalized paths to happiness in society. Thus, people can follow these paths and achieve social approval, or reject them and follow their own path, which for young people may result in being labeled delinquent. Merton's Strain Theory suggests five possibilities.

“Delinquency prevention” is the broad term for all efforts aimed at preventing youth from becoming involved in criminal, or other antisocial, activities. Governments have recognized the importance of allocating resources for the prevention of delinquency. Organizations such as the Center for Delinquency Prevention and Youth Development[5] are working toward unifying delinquency prevention efforts. Because it is often difficult for states to provide the fiscal resources necessary for good prevention, organizations, communities, and governments are working more in collaboration with each other to prevent juvenile delinquency.

Because the development of delinquent behavior in youth is influenced by numerous factors, so should prevention efforts be comprehensive in scope. Prevention services include activities such as substance abuse education and treatment; family counseling; youth mentoring; parenting education; educational support; and youth sheltering. Although those who provide prevention services are often well educated, well trained, and dedicated, they are frequently underpaid, and under-recognized for their work.

Did you know?
Juvenile offenders are generally treated more in terms of reform than punishment with the result that probation, or suspended sentencing, is common

State and communal efforts to prevent delinquency are not always successful, creating the need for treatment programs. These take the form of juvenile detention centers, reform schools, and other methods also used for adults such as probation and therapy.

A youth detention center, also known as juvenile hall or reform school, is a prison for people from the age of responsibility, which varies by jurisdiction, to the age of majority, which also varies by jurisdiction. Its intended purpose is to protect the public from the delinquent acts of minors by granting those minors secure detention and temporary care with intent, in most cases, to make those who serve time functioning adults in society.

While juvenile hall is technically a prison, it differs from a penal institution because education is usually provided to compensate for the offender's removal from school, and the center is designed to be like an offender's home as much as possible.

Additionally, not all of the residents are necessarily juvenile delinquents. Some children or incompetents may be held in juvenile halls temporarily upon the deaths of their parents or guardians, upon the discovery of criminal neglect or abuse by their parents or guardians. This is not as a method of punishment for the child or ward, but rather a method of care because the juvenile hall contains the superior facilities for their needs where no alternative exists. Such children and wards are usually separated from juvenile delinquents and found more permanent care as soon as possible.

Therapy for juvenile delinquents is a key part of reintegration to society following delinquent actions. Therapists can often discover the reasons juveniles have for acting out such as abuse at home. Following these discoveries, the delinquent can either be removed from a harmful home life permanently or can be helped to cope with past abuse. Therapy can also teach the delinquents the moral lessons they often lack at home due to a poor upbringing. Participation in this therapy hopefully leads to better-adjusted people able to go back to school or assume employment.

Youths who have committed crimes are often released on probation for a number of reasons. Detention in a youth center is not seen as an optimal option for everyone who commits delinquent acts as detention centers can have corrupting influences on those imprisoned there. Also, parental care is often seen as a bulwark against future crimes. As a result, juvenile offenders can be released on probation under the supervision of their parents or other caregivers. Juvenile probation carries the same caveats as probation for adults in that offenders sentenced to probation will immediately be sent to prison should they commit another offense.