Observational learning or social learning occurs when individuals watch and then imitate the behavior of others. It is also known as "modeling." It is most associated with the work of psychologist Albert Bandura, who conducted some of the most important studies in the area and developed social learning theory.

Although observational learning can take place at any stage in life, it is thought to be particularly important during childhood. Because of this, social learning theory has influenced debates on the effect of television violence and parental role models on children's behavior. Bandura's Bobo doll experiment is widely cited in social psychology as a demonstration of observational learning. Observational learning allows for learning without any change in behavior and has therefore been used as an argument against strict behaviorism which argued that behavior change must occur for new behaviors to be acquired.

Like imitation, the ability upon which it is based, observational learning is a very powerful learning tool. Through this form of learning, human beings are able to pass on techniques and skills without need for detailed, verbal instruction. On the other hand, behaviors that damage others, such as prejudice, racial discrimination, and aggression are also easily learned from a model. Thus, whether social learning serves the good of society or ill, depends on the original model of behavior and the ability of those observing to discern and act on their judgment of whether or not to adopt the same attitudes and act in the same manner.

Albert Bandura became interested in discovering the causes of aggression in children, highly influenced by the social learning and imitation theory put forth by Neil E. Miller and John Dollard in the 1940s. Their theory basically said that people develop new behaviors through exposure to consequences. Bandura's famous Bobo doll experiment suggested a radically different mechanism. The conclusions he drew from the Bobo doll experiment led Bandura to publish his seminal works on social learning theory. In 1973, he wrote Aggression: A Social Learning Analysis and four years later he published Social Learning Theory. 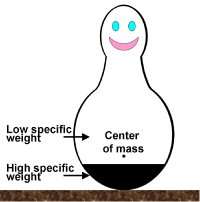 The original Bobo doll experiment took place in 1961. A Bobo doll is an inflatable toy that is approximately the same size as a prepubescent child. Additional studies of this type were conducted by Bandura in 1963 and 1965.

In the playroom, each child was seated in one corner and the adult model was seated in another corner containing a tinker toy set, a mallet, and an inflatable Bobo doll. After a minute of playing with the tinker toy set, the aggressive model would attack the Bobo doll. For each subject, the aggressive model reacted identically with a sequence of physical violence and verbal violence. The non-aggressive model simply played with the tinker toys for the entire period. Following the ten minute period with the models, each child was taken into another playroom filled with highly entertaining toys. In order to spark anger or frustration in the child, he or she was only allowed to play with the toys for a very short period of time. The final stage of the experiment took place in the last room in which the child was left alone for 20 minutes with a series of aggressive and non aggressive toys to play with. Judges watched each child behind a one-way mirror and evaluated the subject based on various measures of aggressive behavior.

The results concerning gender differences strongly supported Bandura's prediction that children are more influenced by same-sex models. Boys exhibited more aggression when exposed to aggressive male models than boys exposed to aggressive female models. While the results for the girls shows similar findings, the results were less drastic. Overall, the evidence strongly supported that males have a tendency to be more aggressive than females.

Bandura successfully supported his theory of social learning in this experiment, that specific behaviors such as aggression can be learned through observing and imitating others even if reinforcement is not used either on the model or the subject. He came to the conclusion that children observing adult behavior are influenced to think that this type of behavior is acceptable thus weakening the child's aggressive inhibitions. The result of reduced aggressive inhibitions in children is that they are more likely to respond to future situations in a more aggressive manner.

Also important in this experiment is the result that males are drastically more inclined to be physically aggressive behaviors than females. Bandura explained that in our society, aggression is considered to be a distinct male trait. Because of this, boys are raised and culturally influenced to be more aggressive and, therefore, it is more acceptable when males exhibit this trait. Girls, not confident of displaying physical aggression, almost matched the boys in Bandura's experiments in terms of verbal aggression, indicating that the manifestation of the aggressive impulse is different from male to female.

Bandura's later (1963) experiment found that observing aggressive behavior via video playback is less influential on a subject than is observing the same aggressive act in person. This experiment is important to psychology because it was a precedent that sparked more studies over the next forty years about the effects of viewing violence in the media on children. 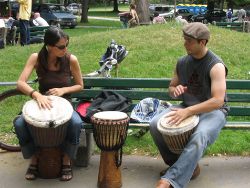 There are several conditions required for a person to successfully model the behavior of someone else. The stages that make up observational learning are: attention, retention, motor reproduction, and motivation.

First of all, they have to pay attention to the model engaging in a certain behavior and be able to retain the components of the behavior in long term memory. In addition, the observer must be able to replicate the behavior they have seen. For example, juggling cannot be effectively learned by observing a model juggler if the observer does not already have the ability to perform the component actions (throwing and catching a ball). Finally, the observer must be motivated to carry out the action they have observed and remembered, and must have the opportunity to do so. For example, a suitably skilled person must want to replicate the behavior of a model juggler, and needs to have an appropriate number of items to juggle in hand. The observer is usually motivated because they expect to receive positive reinforcements for the modeled behavior.

Social learning has many potential effects on behavior. For example, it can teach new behaviors, increase or decrease the frequency with which previously learned behaviors are carried out, and encourage previously forbidden behaviors. Social learning can even increase or decrease behaviors that are merely similar to the one being observed. For example, watching a model excelling in piano playing may encourage an observer to excel in playing the saxophone.

Albert Bandura believed that environmental influences contribute to the social learning of violence in children, especially aggression by family members. In his 1976 book Analysis of Delinquency and Aggression he reported that people who live in high crime areas are more likely to act violently than those in low-crime areas. He also reported that children demonstrate the same aggressive tactics that they see their parents using, highlighting that children are especially vulnerable to aggressive influences in the home. However, Bandura also believed that violent tendencies that are learned in childhood can be treated if they are caught early.

Throughout the years since social learning theory was developed, there have been many debates over whether or not violence on television causes aggressive behavior in children. As indicated by Bandura's 1963 experiment, watching aggressive behaviors on video causes less imitation than watching those same behaviors in person. However, this does not mean that television has no effect on viewers' behavior; clearly the media influences people.

The Surgeon General’s Scientific Advisory Committee on Television and Social Behavior was formed in 1969 to assess the impact of violence on the attitudes, values, and behavior of viewers. The resulting Surgeon General’s report and a follow-up report in 1982 by the National Institute of Mental Health identified three major effects of seeing violence on television (American Psychological Association, 2004):

The effect of violence in the media on levels of aggression in children continues to be a topic of considerable debate today. While there have been many studies that have indicated that television does lead to aggressive behavior, there have also been many that found the opposite effect, that television viewing causes no increase in aggressive behavior and can even deter such behavior. The issue of the impact of televised violence arises not just with fictional violence but with the televising of news footage. Research has demonstrated that the meanings children attach to violence on television is a function of their age, gender, and social class. Despite concern expressed about the impact of violent news broadcasting on impressionable children, the news image that evoked most anger and sadness in British children was on the plight of sea birds covered in oil. Researchers suggest that once the portrayal of violence is understood as not necessarily increasing violence, investigations on the ways television and the mass media can work towards the promotion of non-violence can produce positive results.