A gang is a group of individuals who share a common identity and, in current usage, engage in illegal activities. Historically, the term referred to both criminal groups and ordinary groups of friends. Some commentators use "gang" to refer to small, informal, and disorganized "street gangs," while "syndicate" or "organized crime" are used to refer to larger, more powerful organizations, such as the Italian-American Mafia, which may control entire legitimate businesses as "fronts" for their illegal operations, bringing in millions of dollars per year.

The word "gang" generally appears in a pejorative context, though within "the gang" itself members may adopt the phrase in proud identity or defiance. The increasing problem of gang violence in many cities around the world at the beginning of the twenty-first century is an indication of serious problems in society. As gang members often view their gang as a type of surrogate "family," solutions to this problem should be sought in strengthening families. It is natural and healthy for youths to have friends and to form close-knit groups with whom they can share common experiences. However, such relationships should stand on the foundation of healthy relationships in the family of origin.

Gangs have a disturbingly prominent place in history. The Roman orator Cicero spoke of groups of armed youths. Seventeenth-century England was terrorized by the Mohocks. Gangs played a role in America's Revolutionary War, as armed patriots terrorized loyalists.[1]

Most American cities have some history of gang violence, which often had profound effects on the political climate and later development in general. Early in America's history, politicians were often involved. These politicians funded gangs to be used in violent acts against political opponents. In New York City, many gangs were centered in the infamous Five Points region, including the "Bowery Boys," the "Shirt Tails," and the "Dead Rabbits." Aside from their regular practice of killing innocent people for money, the most notorious singular violent act committed by these gangs was the New York Draft Riots of 1863. Gang members commonly used blackjacks, lead pipes, and daggers, and could often be identified by the large plug hats that they would wear pulled down over their ears, usually stuffed with paper and rags to mitigate blows from attackers. In San Francisco, one of the largest and most influential gangs was the "Sydney Ducks," which consisted of mostly immigrants from Australia.

Gang violence has occurred everywhere across the globe, including the "Jamaican Yardies" in England, the "Chinese Snakeheads," the Philippine "Bahala Na Gang," the "Fittja Boys" in Sweden, the "Mayi Mayi" in Congo, and the "Nivelles" gang in Belgium.

Gangs often take over territory or "turf" in a particular city. Some gangs provide "protection," which is often a thin cover for extortion. The "protection" is usually from the gang itself. Since roughly the 1970s, street gangs have been strongly connected with drug sales (especially crack cocaine). Statistics indicate that gangs were responsible for some two-fifths of illegal drug sales in America in the 1990s.[2] Some commit burglaries, car theft, and armed robbery. Many gangs use fronts to demonstrate influence and gain revenue in a particular area. These clandestine bases may include restaurants, bars, casinos, race tracks, strip clubs, or other businesses.

Gangs are often spread when the family of a gang member or members moves out of the gang neighborhood and the children take the gang culture and lore with them to a new area and recruit new members for their old gang. This development has been referred to as the formation of "satellite" gangs.

Gang violence' refers mostly to those illegal and non-political acts of violence perpetrated by gangs against innocent people, property, or other gangs. Throughout history, such acts have been committed by gangs at all levels of organization, social class, and race. The idea that one particular race is more often responsible for gang violence is readily shown to be a fiction by a brief historical examination.

Gang "warfare" is the conflict between opposing gangs. Gang warfare is commonly held over turf boundary disputes, the takeover of an area in order to bring in narcotics to push on the streets, personal rivalries, or simply the fact that the opposing group is different in some way. Gang warfare affects families, communities, and entire cities. Many cities in South America have become engrossed in gang warfare and represent one extreme of the spectrum.

Individual members of gangs may be referred to as gangsters, "gangstas," or "gangbangers."

The U.S. government estimated that at the turn of the twenty-first century nearly half of all gang members in the country were Hispanic, about one-third were African American, about one-eighth were white, and about one-twentieth were Asian. The large majority of gang members are male, with few gangs being female dominated. About two-fifths of gang members are under the age of 17, and almost nine-tenths are under 25.[3] There is a strong correlation between gang membership and family dysfunction, with many gang members coming from families with histories of drug abuse or domestic violence.

Entry into a gang often entails being "jumped in," where other members beat up the recruit in order to test his dedication. Sometimes the recruit may be given a crime to commit (robbery, rape, or murder) as another route of entry. Often, the decision to join a gang is purely practical, where the danger of being unaffiliated—and thus unprotected—outweighs the risks of membership. Unfortunately, this perpetuates a vicious cycle, only contributing to the violence and corruption of a neighborhood. Other temptations to join a gang also exist: money, drugs, power, and pride for the neighborhood. Although the gang's very existence harms the community, members take great pride in "defending" their local turf.

Once in the gang, the recruit is now a member of the street "family," and any offense toward him or any of his brethren will be avenged by the gang. They are often given nicknames, partially to prevent their identity from being revealed to law enforcement, but also to denote their rank within the gang. Younger members may start out performing minor crimes, working their way up within the organization, building their reputation through criminal acts. Most members retain their gang affiliations when sent to prison. Usually the member is affiliated for life, with two unfavorable options for exiting the gang: one, he may be killed; two, he may desert the gang, essentially forfeiting his life if any of the gang should see him again. 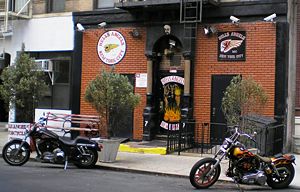 An "outlaw motorcyclist" or "biker" is an individual who is a member or an affiliate of an “outlaw motorcycle club." The term "outlaw" came from the American Motorcyclist Association in the 1950s, when they stated that 99 percent of all bikers were law-abiding, thus leaving 1 percent outlaw. The term "outlaw biker" was coined and generally referred to a motorcycle club's non-participation in AMA-sanctioned events and runs.

An outlaw biker can be defined by their relation to a motorcycle club, their involvement in criminal activity such as dealing with firearms, sale of illegal drugs, trade in stolen motorcycles and parts, and a general attitude of being outside law-abiding society. However, this is not typical of most motorcycle club members. The largest and most well-known group of outlaw bikers in the world are the "Hells Angels," with 227 chapters in the United States and 29 foreign countries and 2,500 members; another of the largest is the "Bandidos" with "possibly 600" members.[4]

Wearing a leather or denim vest displaying "patches" is a common occurrence among motorcyclists. An outlaw biker differs in the type of patches worn, and the importance paid to placement and affiliation. The type of patches worn can have serious consequences in meeting other club members if worn in a way deemed inappropriate.

Worn on the back of the vest, these patches are known as colors, and are separated into three parts. The main center patch usually depicts the logo or mascot of the club. The separate top and bottom pieces are known as "rockers," consisting normally of the name of the motorcycle club affiliated with, written in a half circle shape. Prospects (nominees, not yet fully part of the club) usually wear a rocker saying "PROSPECT." Other patches worn on the front of the vest signify the club members stipulating rank, their status with the club, and memorial patches for deceased members.

Some law enforcement agencies have given these motorcycle clubs the label of "gang." There is some disagreement as to the accuracy of this appellation. There is also some disagreement as to the level of involvement of the typical "outlaw biker" with criminal enterprises in keeping with other known gangs. Most people, and law enforcement, label these clubs as "gangs" because of several contributing factors: yearly re-publishing of "gang task force" reports that mostly repeat what the previous year's report said, the intense press coverage given to club related activities, and the attraction that such clubs have to people of questionable character. It is quite common for a person with frequent legal problems (drug use being most common) to strive for "hang around" or "prospect" status with a club. Often these people are rejected by the club at about the same time that they get themselves back in trouble with that law. Unfortunately the damage is done at that point. This is a continuous problem for all outlaw motorcycle clubs.

Bikers often hold parties and other social events at their clubhouses. Many times regular weekly meetings are referred to as "church."

In addition to the previously mentioned gangs, some very well known gangs are the California-based "Crips" and "Bloods," or the "Sureños" and "Norteños." Others include the white supremacist gang "Nazi Low Riders," the "Latin Kings," the "Gangster Disciples" of Chicago, the "Vice Lords," the Los Angeles-based "18th Street Gang," and the "Jamaican Posses." In the 1980s gangs such as the Central American gang named "Mara Salvatrucha," the Miami based "International Posse," and the Cambodian "Tiny Raskal Gang" were well known.

Gangs have featured prominently in American popular culture, featuring in novels and films.

Gangs in the Future

Gangs pose a threat to people in all walks of life on all continents. While gang membership and activity may surge and ebb periodically, just a few members can terrorize entire communities. Gangs' association with drugs, prostitution, and other forms of violence can lead to an atmosphere of fear and dissonance. Unfortunately, children often see gangs as their only way out of low-income backgrounds with little opportunity for education or satisfying work and well-paid jobs.

Gangs offer a sense of belonging to alienated youths. Gangs often serve as a surrogate family to these disaffected children. Gang membership was formerly seen as a normal phase for a young person to enter into, although recent definitions include crime in the definition, eliminating the view that gang membership is evidence of normalcy.[5]

Gangs become a larger problem when considered in light of the easy availability of weapons and drugs in society today. The presence of both of these will only lead to greater violence and suffering so long as these youths are not offered healthy alternatives such as stable family lives, education, shelter from violence, and high self-esteem.