For other uses of the term, see complex. 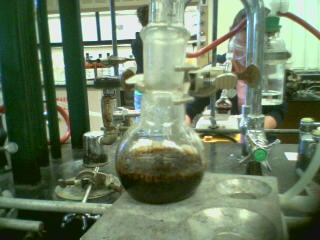 A complex in chemistry usually is used to describe molecules or ensembles formed by the combination of ligands and metal ions. Originally, a chemical complex implied a reversible association of molecules, atoms, or ions through weak chemical bonds. As applied to coordination chemistry, this meaning has been modified.

Some metal complexes are formed virtually irreversibly and many are bound together by bonds that are quite strong.

Coordination complexes were known, although not understood in any sense, since the beginning of chemistry. Examples include Prussian blue and copper vitriol. The key breakthrough occurred when Alfred Werner proposed, inter alia, that Co(III) bears six ligands in an octahedral geometry. The theory allows one to understand the difference between coordinated and ionic chloride in the cobalt amine chlorides and to explain many of the previously inexplicable isomers. He resolved the first coordination complex into optical isomers, overthrowing the theory that chirality was necessarily associated with carbon compounds.

Metal complexes, also known as coordination compounds, include all metal compounds, aside from metal vapors, plasmas, and alloys. The study of "coordination chemistry" is the study of "inorganic chemistry" of all alkali and alkaline earth metals, transition metals, lanthanides, actinides, and metalloids. Thus, coordination chemistry is the chemistry of the majority of the periodic table. Metals and metal ions only exist, in the condensed phases at least, surrounded by ligands.

The ions or molecules surrounding the metal are called ligands. Ligands are generally bound to a metal ion by a coordinate covalent bond (donating electrons from a lone electron pair into an empty metal orbital), and are thus said to be coordinated to the ion. The areas of coordination chemistry can be classified according to the nature of the ligands, broadly speaking:

Example: hemoglobin
Many natural ligands are "classical" especially including water.

Example: [Fe4S4(Scysteinyl)4]2−, in which a cluster is embedded in a biologically active species.

Mineralogy, materials science, and solid state chemistry—as they apply to metal ions—are subsets of coordination chemistry in the sense that the metals are surrounded by ligands. In many cases these ligands are oxides or sulfides, but the metals are coordinated nonetheless, and the principles and guidelines discussed below apply. It is true that the focus of mineralogy, materials science, and solid state chemistry differs from the usual focus of coordination or inorganic chemistry. The former are primarily concerned with polymeric structures, properties arising from a collective effects of many highly interconnected metals. In contrast, coordination chemistry focuses on reactivity and properties complexes containing individual metal atoms or small ensembles of metal atoms.

Different ligand structural arrangements result from the coordination number. Most structures follow the points-on-a-sphere pattern (or, as if the central atom were in the middle of a polyhedron where the corners of that shape are the locations of the ligands), where orbital overlap (between ligand and metal orbitals) and ligand-ligand repulsions tend to lead to certain regular geometries. The most observed geometries are listed below, but there are many cases which deviate from a regular geometry, e.g. due to the use of ligands of different types (which results in irregular bond lengths; the coordination atoms do not follow a points-on-a-sphere pattern), due to the size of ligands, or due to electronic effects (see e.g. Jahn-Teller distortion):

Some exceptions and provisions should be noted:

The arrangement of the ligands is fixed for a given complex, but in some cases it is mutable by a reaction that forms another stable isomer.

There exists many kinds types of isomerism in coordination complexes, just as in many other compounds.

Geometric isomerism occurs in octahedral and square planar complexes (but not tetrahedral). When two ligands are opposite each other they are said to be trans, when mutually adjacent, cis. When three identical ligands occupy one face of an octahedron, the isomer is said to be facial, or fac. If these three ligands are coplanar, the isomer is said to be meridional, or mer. For example, in an octahedral compound with three of one ligand and three of another, there are two geometric isomers: the mer in which each set of three same ligands is in a meridian and the fac in which each set of three is on a face of the octahedron.

Optical isomerism occurs when the mirror image of a compound is not superimposable with the original compound. It is so called because such isomers are optically active, that is, they rotate the plane of polarized light. The symbol Λ (delta) is used as a prefix to describe the left-handed propeller twist formed by three bidentate ligands, as shown. Similarly, the symbol Δ (lambda) is used as a prefix for the right-handed propeller twist.

Traditional classifications of the kinds of isomer have become archaic with the advent of modern structural chemistry. In the older literature, one encounters:

Many of the properties of metal complexes are dictated by their electronic structures. The electronic structure can be described by a relatively ionic model that ascribes formal charges to the metals and ligands and does not focus on covalency. This approach is the essence of Crystal field theory (CFT). Crystal field theory, introduced by Hans Bethe in 1929, gives a quantum mechanically based attempt at understanding complexes. But crystal field theory treats all interactions in a complex as ionic and assumes that the ligands can be approximated by negative point charges.

Chemists tend to employ the simplest model required to predict the properties of interest; for this reason, CFT has been a favorite for the discussions when possible. MO and LF theories are more complicated, but provide a more realistic perspective.

The electronic configuration of the complexes gives them some important properties:

Metal complexes that have unpaired electrons are magnetic. Considering only monometallic complexes, unpaired electrons arise because the complex has an odd number of electrons or because electron pairing is destabilized. Thus, monomeric Ti(III) species have one "d-electron" and must be (para)magnetic, regardless of the geometry or the nature of the ligands. Ti(II), with two d-electrons, forms some complexes that have two unpaired electrons and others with none. This effect is illustrated by the compounds TiX2[(CH3)2PCH2CH2P(CH3)2]2: when X = Cl, the complex is paramagnetic (high spin configuration) whereas when X=CH3, it is diamagnetic (low spin configuration). It is important to realize that ligands provide an important means of adjusting the ground state properties.

In bi- and polymetallic complexes, in which the individual centers have an odd number of electrons or which are high spin, the situation is more complicated. If there is interaction (either direct or through ligand) between the two (or more) metal centers, the electrons may couple (antiferromagnetic coupling, resulting in a diamagnetic compound), or they may enhance each other (ferromagnetic coupling). When there is no interaction, the two (or more) individual metal centers behave as if in two separate molecules.

A common reaction between coordination complexes involving ligands are inner and outer sphere electron transfers. They are two different mechanisms of electron transfer redox reactions, largely defined by the late Henry Taube. In an inner sphere reaction, a ligand with two lone electron pairs acts as a bridging ligand, a ligand to which both coordination centres can bond. Through this, electrons are transferred from one centre to another.

One important indicator of reactivity is the rate of degenerate exchange of ligands. For example, the rate of interchange of coordinate water in [M(H2O)6]n+ complexes varies over 20 orders of magnitude. Complexes where the ligands are released and rebound rapidly are classified as labile. Such labile complexes can be quite stable thermodyanically. Typical labile metal complexes have either low charge (Na+), electrons in d-orbitals that are antibonding with respect to the ligands (Zn2+), or lack covalency (Ln3+, where Ln is any lanthanide). The lability of a metal complex also depends on the high vs. low spin configurations when such is possible. Thus high spin Fe(II) and Co(III) form labile complexes whereas low spin analogues are inert. Cr(III) can only exist in the low-spin state (quartet), which is inert because of its high formal oxidation state, absence of electrons in orbitals that are M-L antibonding, plus some "ligand field stabilization" associated with the d3 configuration.

If the ligands around the metal are carefully chosen, the metal can aid in (stoichiometric or catalytic) transformations of molecules or be used as a sensor.

The basic procedure for naming a complex:

The coordination number of ligands attached to more than one metal (bridging ligands) is indicated by a subscript to the Greek symbol μ placed before the ligand name. Thus the dimer of aluminium trichloride is described by Al2Cl4(μ2-Cl)2.

Retrieved from https://www.newworldencyclopedia.org/p/index.php?title=Complex_(chemistry)&oldid=1003704
Categories:
Hidden category:
This page was last edited on 15 March 2017, at 15:13.
Content is available under Creative Commons Attribution/Share-Alike License; additional terms may apply. See Terms of Use for details.