Rhodium (chemical symbol Rh, atomic number 45) is a rare, silvery-white, inert metal. It is a member of the platinum group of elements and is found in platinum ores. As the most expensive precious metal,[1] it is a symbol of wealth and is occasionally used in the presentation of high honors.

This metal is a hardening agent for the production of durable, heat-resistant alloys with platinum and palladium. These alloys can be found in such items as furnace windings, thermocouple elements, aircraft spark plugs, and laboratory crucibles. Rhodium is also good for making electrical contacts, and it is a valuable catalyst for automobile catalytic converters and various industrial processes. As a highly reflective metal, it provides a good finish for jewelry, mirrors, and searchlights.

Rhodium occurs in small amounts in ores of other metals such as platinum, palladium, nickel, silver, and gold. Its industrial extraction and purification processes are therefore complex. Principal sources of this element are located in South Africa, Russia (river sands of the Ural Mountains), and some parts of North and South America. In Canada, it is extracted from the copper-nickel sulfide mining area of the Sudbury, Ontario region. Although the quantity at Sudbury is very small, the large amount of nickel ore processed makes rhodium recovery cost-effective. The main exporter of rhodium is South Africa, followed by Russia.

Rhodium can also be extracted from spent nuclear fuel, which contains an average of 400 grams of rhodium per metric ton. Rhodium from this source contains radioactive isotopes with half-lives of up to 2.9 years. In other words, after every 2.9 years, the radioactivity drops by 50 percent. It is therefore stored for at least 20 years in a secure area, to allow it to become stable.

Rhodium (Greek rhodon, meaning "rose") was discovered in 1803 by William Hyde Wollaston, soon after he discovered palladium. Wollaston made this discovery in England using crude platinum ore that presumably came from South America. After performing a series of chemical reactions to extract platinum and palladium from the ore, he obtained a red powder of sodium rhodium chloride (Na3RhCl6.12H2O). He then isolated rhodium metal from the powder by reacting it with hydrogen gas. 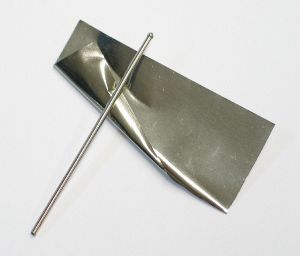 Rhodium is classified as a transition metal. In the periodic table, it lies in period five between ruthenium and palladium and is closely related to the latter two elements. In addition, it is situated in group nine (former group 8B), between cobalt and iridium.

This hard, silvery metal is highly reflective and extremely resistant to corrosion. It has a higher melting point and lower density than platinum. It is not attacked by most acids and dissolves only in aqua regia (a mixture of concentrated hydrochloric acid and nitric acid in the ratio 3:1 by volume). If slowly cooled from a red-hot state in the presence of air, rhodium changes to the sesquioxide, and the latter converts back to the metal at higher temperatures.

The name rhodium(III) chloride usually refers to hydrated rhodium trichloride, a molecular compound with the formula RhCl3(H2O)3. Another prominent rhodium chloride is RhCl3, a polymeric solid that behaves quite differently. Most chemistry ascribed to "rhodium trichloride" refers to the use of the hydrated form. Some procedures calling for a rhodium chloride imply the use of Na3RhCl6. These chlorides are the products of the separation of rhodium from the other platinum group metals.

RhCl3(H2O)3 exists as dark red crystals. It is soluble in water to give reddish solutions. It is used to prepare a variety of complexes, such as with carbon monoxide, alkenes, pyridine, and phosphines. RhCl3(H2O)3 and some of its complexes are useful catalysts for various reactions. For example, the complex with phosphine (RhCl(PPh3)3), well-known as Wilkinson’s catalyst, is used for the hydrogenation and isomerization of alkenes.

As a noble metal, rhodium is chemically inert. Its compounds, however, can be reactive and should be considered highly toxic and carcinogenic. For rats, the lethal intake (LD50) of rhodium chloride (RhCl3) was found to be 12.6 milligrams per kilograms (mg/kg). Rhodium compounds can leave strong stains on human skin. The element is not known to play any biological role in humans.

Rhodium symbolizes wealth and has been used for giving high honors when more commonly used metals such as silver, gold, or platinum are deemed insufficient. In 1979, the Guinness Book of World Records gave Paul McCartney a rhodium-plated disc for being history's all-time best-selling songwriter and recording artist. Guinness has also noted items such as the world's "Most Expensive Pen" or "Most Expensive Board Game" as containing rhodium.