The chemical compound hydrochloric acid (or muriatic acid) is the aqueous (water-based) solution of hydrogen chloride gas (HCl). This strong acid is highly corrosive and must be handled with appropriate safety precautions. It is the major component of gastric acid. It is routinely used in chemical research laboratories and manufacturing plants. Its applications include the large-scale production of certain compounds (such as vinyl chloride for polyvinyl chloride (PVC) plastic), removal of rust and scale from metals, petroleum production, and ore processing. Smaller-scale applications include the production of gelatin and other ingredients in food, and leather processing. An estimated 20 million metric tons of hydrochloric acid are produced annually.

Hydrochloric acid was first discovered around 800 C.E. by the alchemist Jabir ibn Hayyan (Geber), by mixing common salt with vitriol (sulfuric acid). Jabir discovered many important chemicals, and recorded his findings in over 20 books, which carried his chemical knowledge of hydrochloric acid and other basic chemicals for hundreds of years. Jabir's invention of the gold-dissolving aqua regia, consisting of hydrochloric acid and nitric acid, was of great interest to alchemists searching for the philosopher's stone. 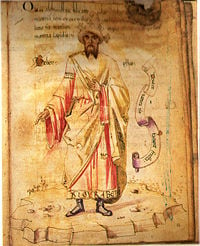 In the Middle Ages, hydrochloric acid was known to European alchemists as spirit of salt or acidum salis. Gaseous HCl was called marine acid air. The old (pre-systematic) name muriatic acid has the same origin (muriatic means "pertaining to brine or salt"), and this name is still sometimes used. Notable production was recorded by Basilius Valentinus, the alchemist-canon of the Benedictine priory Sankt Peter in Erfurt, Germany in the fifteenth century. In the seventeenth century, Johann Rudolf Glauber from Karlstadt am Main, Germany used sodium chloride salt and sulfuric acid for the preparation of sodium sulfate in the Mannheim process, releasing hydrogen chloride gas. Joseph Priestley of Leeds, England prepared pure hydrogen chloride in 1772, and in 1818 Humphry Davy of Penzance, England proved that the chemical composition included hydrogen and chlorine.

During the Industrial Revolution in Europe, demand for alkaline substances such as soda ash increased, and the new industrial soda process by Nicolas Leblanc (Issoundun, France) enabled cheap, large-scale production. In the Leblanc process, salt is converted to soda ash using sulfuric acid, limestone, and coal. Hydrogen chloride is released as a by-product. Until the Alkali Act of 1863, excess HCl was vented to the air. After passage of the act, soda ash producers were obliged to absorb the waste gas in water, producing hydrochloric acid on an industrial scale.

When early in the twentieth century the Leblanc process was effectively replaced by the Solvay process without the hydrochloric acid by-product, hydrochloric acid was already fully settled as an important chemical in numerous applications. The commercial interest initiated other production methods that are still used today, as described below. Today, most hydrochloric acid is made by absorbing hydrogen chloride from industrial organic compounds production.

Hydrochloric acid is listed as a Table II precursor under the 1988 Convention Against Illicit Traffic in Narcotic Drugs and Psychotropic Substances because of its use in the production of drugs such as heroin, cocaine, and methamphetamine.

Hydrogen chloride (HCl) is a monoprotic acid, which means that each molecule can dissociate (ionize) only once to release one H+ ion (a single proton). In aqueous hydrochloric acid, the H+ joins a water molecule to form a hydronium ion, H3O+: 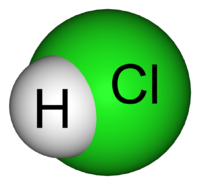 Monoprotic acids have one acid dissociation constant, Ka, which indicates the level of dissociation in water. For a strong acid like HCl, the Ka is large. Theoretical attempts to assign a Ka to HCl have been made. When chloride salts such as NaCl are added to aqueous HCl they have practically no effect on pH, indicating that Cl− is an exceedingly weak conjugate base and that HCl is fully dissociated in aqueous solution. For intermediate to strong solutions of hydrochloric acid, the assumption that H+ molarity (a unit of concentration) equals HCl molarity is excellent, agreeing to four significant digits.

Of the seven common strong acids in chemistry, all of them inorganic, hydrochloric acid is the monoprotic acid least likely to undergo an interfering oxidation-reduction reaction. It is one of the least hazardous strong acids to handle; despite its acidity, it produces the less reactive and non-toxic chloride ion. Intermediate strength hydrochloric acid solutions are quite stable, maintaining their concentrations over time. These attributes, plus the fact that it is available as a pure reagent, mean that hydrochloric acid makes an excellent acidifying reagent and acid titrant (for determining the amount of an unknown quantity of base in titration). Strong acid titrants are useful because they give more distinct endpoints in a titration, making the titration more precise. Hydrochloric acid is frequently used in chemical analysis and to digest samples for analysis. Concentrated hydrochloric acid will dissolve some metals to form oxidized metal chlorides and hydrogen gas. It will produce metal chlorides from basic compounds such as calcium carbonate or copper(II) oxide. It is also used as a simple acid catalyst for some chemical reactions.

The physical properties of hydrochloric acid, such as boiling and melting points, density, and pH depend on the concentration or molarity of HCl in the acid solution. They can range from those of water at 0 percent HCl to values for fuming hydrochloric acid at over 40 percent HCl.

The reference temperature and pressure for the above table are 20 °C and 1 atmosphere (101 kPa).

Hydrochloric acid is produced in solutions up to 38 percent HCl (concentrated grade). Higher concentrations up to just over 40 percent are chemically possible, but the evaporation rate is then so high that storage and handling need extra precautions, such as pressure and low temperature. Bulk industrial-grade is therefore 30 percent to 34 percent, optimized for effective transport and limited product loss by HCl vapors. Solutions for household purposes, mostly cleaning, are typically 10 percent to 12 percent, with strong recommendations to dilute before use.

Major producers worldwide include Dow Chemical at 2 million metric tons annually (2 Mt/year), calculated as HCl gas, and FMC, Georgia Gulf Corporation, Tosoh Corporation, Akzo Nobel, and Tessenderlo at 0.5 to 1.5 Mt/year each. Total world production, for comparison purposes expressed as HCl, is estimated at 20 Mt/year, with 3 Mt/year from direct synthesis, and the rest as secondary product from organic and similar syntheses. By far, most of all hydrochloric acid is consumed captively by the producer. The open world market size is estimated at 5 Mt/year.

Hydrochloric acid is a strong inorganic acid that is used in many industrial processes. The application often determines the required product quality.

An important application of high-quality hydrochloric acid is the regeneration of ion exchange resins. Cation exchange is widely used to remove ions such as Na+ and Ca2+ from aqueous solutions, producing demineralized water.

Ion exchangers and demineralized water are used in all chemical industries, drinking water production, and many food industries.

A very common application of hydrochloric acid is to regulate the basicity (pH) of solutions.

Pickling is an essential step in metal surface treatment, to remove rust or iron oxide scale from iron or steel before subsequent processing, such as extrusion, rolling, galvanizing, and other techniques. Technical-quality HCl at typically 18 percent concentration is the most commonly-used pickling agent for the pickling of carbon steel grades.

The spent acid has long been re-used as ferrous chloride solutions, but high heavy-metal levels in the pickling liquor has decreased this practice.

By recuperation of the spent acid, a closed acid loop is established. The ferric oxide by product of the regeneration process is a valuable by-product, used in a variety of secondary industries.

HCl is not a common pickling agent for stainless steel grades.

Numerous products can be produced with hydrochloric acid in normal acid-base reactions, resulting in inorganic compounds. These include water treatment chemicals such as iron(III) chloride and polyaluminium chloride (PAC).

Both iron(III) chloride and PAC are used as flocculation and coagulation agents in wastewater treatment, drinking water production, and paper production.

Hydrochloric acid is a fundamental chemical, and as such it is used for a large number of small-scale applications, such as leather processing, household cleaning, and building construction. In addition, a way of stimulating oil production is by injecting hydrochloric acid into the rock formation of an oil well, dissolving a portion of the rock, and creating a large-pore structure. Oil-well acidizing is a common process in the North Sea oil production industry.

Many chemical reactions involving hydrochloric acid are applied in the production of food, food ingredients, and food additives. Typical products include aspartame, fructose, citric acid, lysine, hydrolyzed (vegetable) protein as food enhancer, and in gelatin production. Food-grade (extra-pure) hydrochloric acid can be applied when needed for the final product.

Hydrochloric acid constitutes the majority of gastric acid, the human digestive fluid. In a complex process and at a large energetic burden, it is secreted by parietal cells (also known as oxyntic cells). These cells contain an extensive secretory network (called canaliculi) from which the HCl is secreted into the lumen of the stomach. They are part of the fundic glands (also known as oxyntic glands) in the stomach.

Safety mechanisms that prevent the damage of the epithelium of digestive tract by hydrochloric acid are the following:

When, due to different reasons, these mechanisms fail, heartburn or peptic ulcers can develop. Drugs called proton pump inhibitors prevent the body from making excess acid in the stomach, while antacids neutralize existing acid.

In some instances, not enough of hydrochloric acid gets produced in the stomach. These pathologic states are denoted by the terms hypochlorhydria and achlorhydria. Potentially they can lead to gastroenteritis.

Phosgene (COCl2) was a common chemical warfare agent used in World War I. The main effect of phosgene results from the dissolution of the gas in the mucous membranes deep in the lung, where it is converted by hydrolysis into carbonic acid and the corrosive hydrochloric acid. The latter disrupts the alveolar-capillary membranes so that the lung becomes filled with fluid (pulmonary edema).

Hydrochloric acid is also partly responsible for the harmful or blistering effects of mustard gas. In the presence of water, such as on the moist surface of the eyes or lungs, mustard gas breaks down to form hydrochloric acid.

Hydrochloric acid in high concentrations forms acidic mists. Both the mist and the solution have a corrosive effect on human tissue, potentially damaging respiratory organs, eyes, skin and intestines. Upon mixing hydrochloric acid with common oxidizing chemicals, such as bleach (NaClO) or permanganate (KMnO4), the toxic gas chlorine is produced. To minimize the risks while working with hydrochloric acid, appropriate precautions should be taken, including wearing rubber or PVC gloves, protective eye goggles, and chemical resistant clothing.