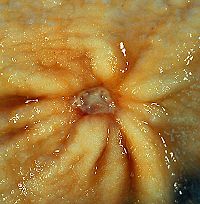 A benign gastric ulcer (from the antrum) of a gastrectomy specimen.

A peptic ulcer is an ulcer of the area of the gastrointestinal tract that is usually acidic and includes the lower part of the esophagus, the stomach, and the duodenum (first part of the small intestine). Some also include the jejunum (second part of the small intestine) (Longe 2006). This condition also is known as peptic ulcer disease or PUD. "Peptic" refers to the enzyme pepsin, a digestive protease in the stomach that digests food proteins into peptides.

An ulcer is a lesion or eroded area on the surface of the skin or mucous membranes characterized by tissue disintegration. Essentially, it impacts the epithelium—the tissue that covers organs and surfaces of the bodies of animals, including both outside surfaces (the skin) and inside cavities. As such, an ulcer can impact such areas as the the oral cavity, the lower extremities, feet, the eyes (most often the cornea), and so forth. However, in common usage, ulcer often is used to refer to peptic ulcers, which are disorders in the upper digestive tract.

Ulcers in general have a variety of causes, including injury, circulatory problems, infectious agents, disease, trauma, and so forth. While stress and diet were commonly attributed as causes of peptic ulcers, peptic ulcers are now linked primarily to infection by the bacterium Helicobacter pylori, as well as use to use of nonsteroidal anti-inflammatory drugs (NSAIDS, such as aspirin, ibuprofen, etc.), and in some cases overproduction of digestive juices (Zollinger-Ellison syndrome), among others.

The discovery that H. pylori infection is a major cause of peptic ulcers is a triumph of two researchers, Robin Warren and Barry Marshall, who had the courage to speak out over the prevailing scientific dogma. They were able to keep an open mind and see what others had seen; but think what others had not thought (Van der Weyden et al. 2005). It also reflects the commitment of the discoverers: When the hypothesis was poorly received, Marshall successfully infected himself with the bacterium in support for their novel concept.

Longe (2006) lists the use of NSAIDS as the single most common cause of gastric ulcers. These drugs, which can be obtained without prescription, often are overused, as people look to treat symptoms of headaches, sore muscles, and other complaints without addressing the underlying causes of the complaints. Such causes reflect the importance of personal responsibility for one's health and perhaps the need for dietary or lifestyle changes.

Peptic ulcers are the most common ulcers of the gastrointestinal tract. A peptic ulcer may arise at various locations:

Longe (2006) also recognizes peptic ulcers as occurring in the jejunum, the portion of the small intestine after the duodenum.

Contrary to general belief, more peptic ulcers arise in the duodenum (first part of the small intestine, just after the stomach) than in the stomach.

The linings in the gastrointestinal tract normally can resist the digestive acids produced. Ulcers develop when this protective ability is reduced and the lining breaks down.

The most common causes of peptic ulcers are bacterial infection, NSAIDS (nonsteroidal anti-inflammatory drugs), and disorders that cause oversecretion of digestive juices.

Symptoms of a peptic ulcer can be:

A history of heartburn, gastroesophageal reflux disease (GERD) and use of certain forms of medication can raise the suspicion for peptic ulcer, such as NSAIDs and glucocorticoids (e.g., dexamethasone and prednisolone).

In patients over 45 with more than two weeks of the above symptoms, the odds for peptic ulceration are high enough to warrant rapid investigation by EGD (esophagogastroduodenoscopy).

About 10 to 20 percent of individuals with peptic ulcers develop complications during the illness, which can be serious (Longe 2006). Complications include:

An esophagogastroduodenoscopy (EGD), a form of endoscopy, also known as a gastroscopy, is carried out on patients in whom a peptic ulcer is suspected. By direct visual identification, the location and severity of an ulcer can be described. Moreover, if no ulcer is present, EGD can often provide an alternative diagnosis. If the ulcer is in the stomach, the doctor may take a tissue sample for analysis, because 3-5 percent of gastric ulcers are malignant; duodenal ulcers are rarely malignant (Longe 2006).

The diagnosis of Helicobacter pylori can be by:

The possibility of other causes of ulcers, notably malignancy (gastric cancer) needs to be kept in mind. This is especially true in ulcers of the greater (large) curvature of the stomach; most are also a consequence of chronic H. pylori infection.

Blood tests usual appear normal for ulcer patients without complications, but can be useful in evaluating anemia from an ulcer that is bleeding or show a high white blood cell count in the case of perforation or penetration (Longe 2006).

Gastric ulcer is most often localized on the lesser curvature of the stomach. It is a round to oval parietal defect ("hole"), 2 to 4 cm diameter, with a smooth base and perpendicular borders. These borders are not elevated or irregular as in gastric cancer - ulcerative form. Surrounding mucosa may present radial folds, as a consequence of the parietal scarring.

Gastric peptic ulcer is a mucosal defect which penetrates the muscularis mucosae and muscularis propria, produced by acid-pepsin aggression. Ulcer margins are perpendicular and present chronic gastritis. During the active phase, the base of the ulcer shows four zones: inflammatory exudate, fibrinoid necrosis, granulation tissue and fibrous tissue. The fibrous base of the ulcer may contain vessels with thickened wall or with thrombosis (Danciu 2005).

Medications using drugs that lower the rate of stomach acid secretions are one form of treatment, as well as drugs to protect the stomach tissues. Younger patients with ulcer-like symptoms are often treated with antacids or H2 antagonists before EGD is undertaken. Sucralfate (Carafate) helps to prevent further damage from stomach acids, as well as bismuth preparations. Bismuth compounds may actually reduce or even clear organisms.

Patients who are taking nonsteroidal anti-inflammatories (NSAIDs) may also be prescribed a prostaglandin analogue (Misoprostol) in order to help prevent peptic ulcers, which may be a side-effect of the NSAIDs.

When H. pylori infection is present, the most effective treatments are combinations of 2 antibiotics (e.g., Erythromycin, Ampicillin, Amoxicillin, Tetracycline, Metronidazole) and 1 proton pump inhibitor (PPI). An effective combination would be Amoxicillin + Metronidazole + Pantoprazole (a PPI). In the absence of H. pylori, long-term higher dose PPIs are often used.

Treatment of H. pylori usually leads to clearing of infection, relief of symptoms and eventual healing of ulcers. Recurrence of infection can occur and retreatment may be required, if necessary with other antibiotics. Since the widespread use of PPI's in the 1990s, surgical procedures (like "highly selective vagotomy," removal of part of the vagus nerve) for uncomplicated peptic ulcers became obsolete.

Perforated peptic ulcer is a surgical emergency and requires surgical repair of the perforation. Most bleeding ulcers require endoscopy urgently to stop bleeding with cautery or injection.

In 1997, the Centers for Disease Control and Prevention, with other U.S. government agencies, academic institutions, and industry, launched a national education campaign to inform health care providers and consumers about the link between H. pylori and ulcers. This campaign reinforced the news that ulcers are a curable infection, and the fact that health can be greatly improved and money saved by disseminating information about H. pylori (CDC 2006).

Helicobacter pylori was rediscovered in 1982 by two Australian scientists Robin Warren and Barry Marshall (Marshall 1983). Warren and Marshall (1984) contended that most stomach ulcers and gastritis were caused by colonization with this bacterium, not by stress or spicy food as had been assumed before.

The H. pylori hypothesis was poorly received, so in an act of self-experimentation Marshall drank a petri-dish containing a culture of organisms extracted from a patient and soon developed gastritis. His symptoms disappeared after two weeks, but he took antibiotics to kill the remaining bacteria at the urging of his wife, since halitosis is one of the symptoms of infection (Van der Weyden et al. 2005). In seeing what others had seen but thinking what nobody else had thought, Marshall attributes his relative inexperience in helping to think in an original way: "“If the dogma is incorrect, it’s better to know nothing about it” (Van der Weyden et al. 2005).

In 2005, the Karolinska Institute in Stockholm awarded the Nobel Prize in Physiology or Medicine to Dr. Marshall and his long-time collaborator Dr. Warren "for their discovery of the bacterium Helicobacter pylori and its role in gastritis and peptic ulcer disease."

John Lykoudis was a general practitioner in Greece who treated patients suffering from peptic ulcer disease with antibiotics long before it was commonly recognized that bacteria were a dominant cause for the disease (Rigas and Papavasassiliou 1958).

Retrieved from https://www.newworldencyclopedia.org/p/index.php?title=Peptic_ulcer&oldid=682217
Categories:
Hidden category:
This page was last edited on 2 April 2008, at 14:04.
Content is available under Creative Commons Attribution/Share-Alike License; additional terms may apply. See Terms of Use for details.