Ibuprofen (INN) is a non-steroidal anti-inflammatory drug (NSAID) that is used for the treatment of pain, fever, and inflammation. Ibuprofen is used for relief of symptoms of arthritis and primary dysmenorrhoea.

Ibuprofen is a common and effective, over-the-counter drug for treatment of pain, fever, and inflammation. Nonetheless, there are potential side effects tied to ibuprofen's body altering chemistry. These side effects dictate that a more comprehensive approach to treat these symptoms be considered as well. A comprehensive approach would include seeking for the underlying causes of a health problem (rather than masking the symptoms), learning to manage stress, and possibly include lifestyle or diet changes.

Ibuprofen may be effective as a short-term remedy, but symptoms such as pain, fever, and inflammation may be signs of an underlying, preventable cause. It remains important to understand the message that the symptoms are providing and address that cause. In addition, there are a multitude of non-drug approaches to preventing and dealing with pain and inflammation, including such means as acupuncture, herbal medicine, hypnosis, naturopathy, chiropractic, and so forth. Some alternative methods take into account not just the physical aspects of health, but also the mental, emotional, and spiritual aspects of being human.

Ibuprofen is a non-steroidal anti-inflammatory drug (NSAIDs), a class of drugs that also includes aspirin and naproxen. NSAIDs are drugs with analgesic (relieve pain), antipyretic (reduce fever), and anti-inflammatory (reduce inflammation) effects. As analgesics, NSAIDs are unusual in that they are non-narcotic. The term "non-steroidal" is used to distinguish these drugs from steroids, which (among a broad range of other effects) have a similar eicosanoid-depressing, anti-inflammatory action.

Eicosanoids are signaling molecules that exert complex control over many bodily systems, especially in inflammation, immunity, and as messengers in the central nervous system. Some eicosanoids have strong pro-inflammatory properties. The four families of eicosanoids are the prostaglandins, prostacyclins, the thromboxanes, and the leukotrienes. Ibuprofen is known to block the enzyme that is involved in the synthesis of prostagladins, thus resulting in lower levels of prostagladins and reducing inflammation, pain, and fever. Ibuprofen has no antiplatelet effect, an attributed effect of aspirin that decreases platelet aggregation and inhibits thrombus formation.

Ibuprofen was developed by the research arm of Boots Group during the 1960s. It became available by prescription in 1969 and later for over-the-counter use in various countries (1984 in the United States).

Ibuprofen has the chemical name 2-[4-(2-methylpropyl)phenyl]propanoic acid and the chemical formula C13H18O2. 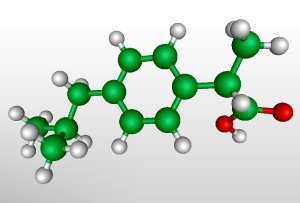 Ibuprofen, like other 2-arylpropionate derivatives (including ketoprofen, flurbiprofen, naproxen, etc.), contains a chiral carbon in the α-position of the propionate moiety. As such there are two possible enantiomers of ibuprofen with the potential for different biological effects and metabolism for each enantiomer.

Indeed it was found that (S)-(+)-ibuprofen (dexibuprofen) was the active form both in vitro and in vivo. It was logical that there was the potential for improving the selectivity and potency of ibuprofen formulations by marketing ibuprofen as a single-enantiomer product (as occurs with naproxen, another NSAID.).

Further in vivo testing, however, revealed the existence of an isomerase that converted (R)-ibuprofen to the active (S)-enantiomer. Thus, due to expenses and futility that would be involved in marketing the single-enantiomer, ibuprofen formulations are currently marketed as racemic mixtures. A notable exception to this is Seractiv (Nordic Drugs).

Ibuprofen was made available under prescription in the United Kingdom in 1969, and in the United States in 1974. In the years since, the good tolerability profile along with extensive experience in the community (otherwise known as Phase IV trials), has resulted in the rescheduling of small packs of ibuprofen to allow availability over-the-counter in pharmacies worldwide, and indeed in supermarkets and other general retailers.

For some time, there has been a limit on the amount that can be bought over the counter in a single transaction in the United Kingdom; this being 2 packs of 16 x 200 mg or 1 pack of 8 or 16 x 400 mg, the latter being far less common for over-the-counter sales. In the United States, the Food and Drug Administration approved it for over-the-counter use in 1984. The wider availability has caused a large increase in ibuprofen use and is now almost as popular as aspirin and paracetamol (acetaminophen). In other countries, such as Spain, higher dosages of 600 mg are available and in Mexico available doses are as high as 800mg per pill.

It appears that its analgesic, antipyretic, and anti-inflammatory activity are achieved principally through COX-2 inhibition; whereas COX-1 inhibition is responsible for its unwanted effects on platelet aggregation and the GI mucosa.

Low doses of ibuprofen (200 mg, and sometimes 400 mg) are available over the counter (OTC) in most countries. Ibuprofen has a dose-dependent duration of action of approximately four to eight hours, which is longer than suggested by its short half-life. The recommended dose varies with body mass and indication. Generally, the oral dose is 200–400 mg (5–10 mg/kg in children) every four to six hours, adding up to a usual daily dose of 800–1200 mg. 1200 mg is considered the maximum daily dose for over-the-counter use, though under medical direction, a maximum daily dose of 3200 mg may sometimes be used in increments of 600–800 mg.

Off-Label and investigational use

In Europe, Australia, and New Zealand, ibuprofen lysine (ibuprofenlysinat, the lysine salt of ibuprofen) is licensed for treatment of the same conditions as ibuprofen. Ibuprofen lysine has been shown to have a more rapid onset of action compared to base ibuprofen (Geislinger et al. 1989).

Ibuprofen appears to have the lowest incidence of gastrointestinal adverse drug reactions (ADRs) of all the non-selective NSAIDs. However, this only holds true at lower doses of ibuprofen, so over-the-counter preparations of ibuprofen are generally labeled to advise a maximum daily dose of 1,200 mg.

As with other NSAIDs, ibuprofen has been reported to be a photosensitising agent (Bergner and Przybilla 1992; Thomson 2006). However, this rarely occurs with ibuprofen and it is considered to be a very weak photosensitising agent when compared with other members of the 2-arylpropionic acids. This is because the ibuprofen molecule contains only a single phenyl moiety and no bond conjugation, resulting in a very weak chromophore system and a very weak absorption spectrum, which does not reach into the solar spectrum.

Along with several other NSAIDs, ibuprofen has been implicated in elevating the risk of myocardial infarction, particularly among those constantly using high doses (Hippisley-Cox and Coupland 2005).

Some studies have found an increased risk of miscarriage with the use of NSAIDs such as ibuprofen early in pregnancy; however, several other studies did not find this association. There are also concerns that drugs such as ibuprofen may interfere with implantation of the early fetus, although a clear risk has not been established.

When ibuprofen is used as directed in the first and second trimester of pregnancy, it is not associated with an increased risk for birth defects. However, ibuprofen is generally not the pain reliever of choice during pregnancy because there are concerns with the use of ibuprofen during the third trimester.

Ibuprofen overdose has become common since it was licensed for over-the-counter use. There are many overdose experiences reported in the medical literature (McElwee et al. 1990). Human response in cases of overdose range from absence of symptoms to fatal outcome in spite of intensive care treatment. Most symptoms are an excess of the pharmacological action of ibuprofen and include abdominal pain, nausea, vomiting, drowsiness, dizziness, headache, tinnitus, and nystagmus. Rarely more severe symptoms such as gastrointestinal bleeding, seizures, metabolic acidosis, hyperkalaemia, hypotension, bradycardia, tachycardia, atrial fibrillation, coma, hepatic dysfunction, acute renal failure, cyanosis, respiratory depression, and cardiac arrest have been reported (Vale and Meredith 1986). The severity of symptoms varies with the ingested dose and the time elapsed, however, individual sensitivity also plays an important role. Generally, the symptoms observed with an overdose of ibuprofen are similar to the symptoms caused by overdoses of other NSAIDs.

There is little correlation between the severity of symptoms and the measured ibuprofen plasma levels. Toxic effects are unlikely at doses below 100 mg/kg but can be severe above 400 mg/kg (Volans et al. 2003); however, large doses do not indicate that the clinical course is likely to be lethal (Seifert et al. 2000). It is not possible to determine a precise lethal dose, as this may vary with age, weight, and concomitant diseases of the individual patient.

Therapy is largely symptomatic. In cases presenting early, gastric decontamination is recommended. This is achieved using activated charcoal; charcoal absorbs the drug before it can enter the systemic circulation. Gastric lavage is now rarely used, but can be considered if the amount ingested is potentially life threatening and it can be performed within 60 minutes of ingestion. Emesis is not recommended (Position paper 2004).

The majority of ibuprofen ingestions produce only mild effects and the management of overdose is straightforward. Standard measures to maintain normal urine output should be instituted and renal function monitored (Volans et al. 2003). Since ibuprofen has acidic properties and is also excreted in the urine, forced alkaline diuresis is theoretically beneficial. However, due to the fact ibuprofen is highly protein bound in the blood, there is minimal renal excretion of unchanged drug. Forced alkaline diuresis is therefore of limited benefit (Hall et al. 1986). Symptomatic therapy for hypotension, GI bleeding, acidosis, and renal toxicity may be indicated. Occasionally, close monitoring in an intensive care unit for several days is necessary. If a patient survives the acute intoxication, he or she will usually experience no late sequelae.

Retrieved from https://www.newworldencyclopedia.org/p/index.php?title=Ibuprofen&oldid=1009128
Categories:
Hidden category:
This page was last edited on 25 January 2018, at 15:27.
Content is available under Creative Commons Attribution/Share-Alike License; additional terms may apply. See Terms of Use for details.