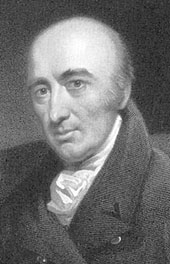 William Hyde Wollaston FRS (August 6, 1766 – December 22, 1828) was an English chemist and physicist who is famous for discovering two chemical elements, palladium, and rhodium, and for developing a way to process platinum ore. Wollaston was a somewhat reclusive scientist who never married. His careful work led to advances in many fields, including crystallography, optics, and electromagnetic phenomena. His observation of lines in the solar spectrum laid the foundation for spectral analysis, the basis for the discovery of many elements, and the establishment of quantum theory in the twentieth century. Besides his discoveries, he has many inventions to his credit.

He was born in East Dereham, Norfolk, the son of the priest-astronomer Francis Wollaston (1737-1815) and his wife Mary Farquier. Wollaston's father composed and published a star catalogue based on his own observations. Wollaston was the second son and one of 17 children of the Wollastons.

He entered Caius College, Cambridge, and there obtained a Medical Masters in 1787, and a doctorate in Medicine 1793, after which he became a fellow of the college. While still studying, he developed an interest in astronomy, and was friendly terms with some of the important English astronomers of the time. He also pursued interests in chemistry, crystallography, metallurgy, and physics.

In 1789, he moved to Bury St. Edmunds, where he established a medical practice. He was not satisfied with the level of success he achieved there, and in the hopes of improving his chances for a medical career, he moved to London and applied for a position at St. George's Hospital. Another physician was awarded the post, however, and this dampened his enthusiasm for medicine, which he then abandoned in favor of other pursuits.

Wollaston was elected to membership in the Royal Society of London in 1793.

In 1801, Wollaston published experiments from which he concluded that electricity produced from a galvanic battery is identical in nature to that produced from friction, the two types differing only in intensity (voltage) and quantity (strength of the current).

The next year, he discovered in experiments on prisms the existence of dark lines in the spectrum of the sun. He observed that these lines indicate the absence of particular colors in sunlight. The lines are today called Fraunhofer lines, after Joseph von Fraunhofer, the scientist who performed the first detailed analysis of them 15 years later. The significance of this discovery would have to wait until the investigations of Gustave Kirchhoff and Robert Bunsen 60 years later.

In 1803, Wollaston discovered the metallic element palladium, and a year later, the closely related element Rhodium.

Wollaston became secretary of the Royal Society in 1806.

In the Bakerian lecture for 1812, Wallaston attempted to construct molecular models based on crystalline structure. In 1813, he invented a slide rule to help chemists compute the quantities of different chemicals that will combine with one another.

In 1822, Wollaston discovered that the cubic crystals found in sulfur compounds of iron and thought to be iron pyrites actually contained titanium.

Wollaston began suffering from bouts of temporary blindness, which caused the left half of images to be blotted out. This may have been the beginning of the illness that took his life four years later.

In his last year, Wollaston realized that he would not survive long. He dictated some memoirs that were published posthumously. He left 1,000 pounds to the Royal Society, the interest from which was to be applied to encourage scientific experiments, and is bestowed periodically under the name of the Wollaston Medal.

He also managed to published several papers in his last days, including one where he attempts to estimate the size of the star Sirius based on estimates of its distance from the earth calculated from the annual parallax, and on a comparison of the luminosity of Sirius and the Sun. He concluded that Sirius was 3.7 times as large as the Sun.

He was too ill to deliver his final Bakerian in 1828 and dictated it to his friend Henry Warburton, who read it on November 20.

Wollaston was invested as a member of the Royal Astronomical Society just before his death, and in gratitude, gave them a telescope that had belonged to his father.

On his deathbed, one of those present observed that it was unlikely Wollaston could be aware of what was going on around him, but Wollaston then signaled to have a sheet of paper and pencil brought to him, upon which he entered several numbers and their sum.

He died on December 22, 1828, and an autopsy revealed the cause as a brain tumor. He never married, and left no children.

Discovery of Palladium and Rhodium

In the late 1790s, Wollaston formed a partnership with Smithson Tennant, an acquaintance of many years, to purify platinum metal in a form that could be shaped and used in industry. As platinum is a hard metal that reacts with very few other substances, chemists sought to use it to form crucibles in which they could conduct their chemical analyses.

Tennant had examined a black powdery substance left after an impure form of platinum was dissolved in aqua regia. He found that the black powder was composed of two metals, which he named Iridium and Osmium.

After precipitating platinum from its solution in aqua regia by the addition of ammonium chloride, some material remained in solution. It was left up to Wollaston to examine this material. By a careful chemical analysis, Wollaston demonstrated that it consisted of several metals, two of which were new elements. One of these, palladium, he named after the asteroid Pallas. The other, rhodium, he named after the red color of one of its salts.

Drawing attention through a formal memoir to the methods by which he discovered palladium would have forced Wollaston to reveal some of the processes by which he purified platinum, upon which his business and that of his partner depended. Wollaston therefore chose to announce his discovery by publishing a circular in the spring of 1803 advertising the sale of the metal, which he called "New Silver," at the shop of a Mr. Foster, in Soho, London. The chemist Richard Chenevix, hearing of this, soon thereafter procured a sample, and after a careful analysis, determined that the metal's density was half that of platinum. As he was unwilling to admit that a new element had been discovered, he falsely concluded that the metal was an amalgam of mercury and platinum.

Wollaston did not formally publish an account of his discovery until 1805. In this account, he clearly demonstrates that palladium is an element with distinct chemical properties.[1]

Identity of galvanic and static electricity

In 1820, Wollaston performed experiments based on the discovery of Orsted that a compass needle is moved by a wire carrying an electric current. While Wollaston attempted to fashion an electric motor based on this phenomenon, he was unsuccessful, and the feat was left for Michael Faraday, who succeeded. When Faraday published his discovery, Wollaston and Humphrey Davy objected to Faraday's failure to mention Wollaston's previous investigations, but Faraday later showed that his work was not based on Wollaston's. The controversy generated bad feelings among these scientists for a time, but its resolution left Faraday in a stronger position as inventor of the first electric motor.

Wollaston also invented the camera lucida in (1807), which produced an image of greater clarity than its predecessor, the camera obscura, and could be used by artists to trace images. He also invented the reflecting goniometer (1809), which used the reflection of light from the faces of crystals to measure the angles they make with one another. These measurements are important since the crystal structure of a mineral is related to its molecular structure. By this method he could take measurements on crystals as small as one-fiftieth of an inch across. Wollaston also invented a sensitive instrument which he called the differential barometer, an account of which was published after his death. Wollaston did not publish an account of his methods for isolating pure platinum until 1828.

Although he was recognized during his lifetime as an important scientist, Wollaston did not achieve the status of a household word, as have some scientists of comparable accomplishment. His name is attached to the mineral, wollastonite, known by mineralogists and those who produce the mineral for commercial purposes, but not to the general public.

Wollaston was, however, a master of chemical analysis, and this enabled him to discover two elements, which he had the honor of naming, and to establish the existence of titanium in a form in which it was originally mistaken for much less valuable substance.

Wollaston was an inventor and a painstaking researcher, whose analysis shed light on many fields, including crystallography, optics and electromagnetic phenomena. His methodology, once revealed, was transparent, and could be easily duplicated. His observation of the lines in the spectra of the Sun laid the foundation for spectral analysis, the basis for the discovery of many elements and for the establishment of quantum theory in the twentieth century.

Wollaston was a somewhat reclusive person, often retiring to his laboratory, which was kept as an entirely private space outside the purview of the public. A taste of the kind of privacy Wollaston enjoyed is revealed by the following anecdote. A guest accidentally wandered into Wollaston's laboratory, and when the intrusion was discovered, Wollaston showed his guest the furnace he used in his researches, saying that it would be both the first and last time his guest would see it.