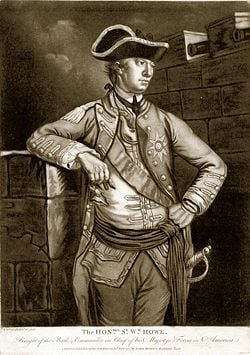 Sir William Howe, 5th Viscount Howe, KB, PC (August 10, 1729 – July 12, 1814), was an English General who was Commander-in-Chief, for a time, of British forces during the American Revolutionary War. He was one of three brothers, all of whom had distinguished military careers for the British crown. William Howe replaced Thomas Gage as commander-in-chief, who had been recalled to Britain, but Howe did not fare much better in his prosecution of the war. He was knighted after his successes, particularly at the Battle of Long Island in 1776, and was henceforth Sir William. Howe's record in the war was marked by the unsuccessful, if heroic, attempt to capture Boston and the successful capture of New York City and Philadelphia, although at the expense of costly failure in the Battle of Saratoga which drew France into the war on the side of the American cause.

William Howe was a loyal soldier and loyal servant of his nation, but that nation's treatment of its North American colonialists could be considered unjust. The American victory in the war for independence, which Howe helped to lose for the United Kingdom, changed the course of history.

William Howe was born into the Protestant Gentry of Nottinghamshire, England, the third son of Emmanuel Howe, 2nd Viscount Howe and Mary Sophia, the daughter of Sophia Charlotte von Platen-Hallermund the Baroness Kielmansegge and Countess of Darlington, who was a half-sister of King George I. Howe's grandfather Scrope Howe had supported the Whig Revolution of 1688 and King William III. In gratitude, William III raised him to the peerage of first Viscount Howe.[1] This connection with the crown may have improved the careers of all three sons, but all were also very capable officers. William's eldest brother was General George Howe, who was killed at Ticonderoga in 1758, in the French and Indian War. The next brother was Admiral Richard Howe, who joined him in America during the American revolution.

He entered the army when he was seventeen by buying a Cornet's commission in the Duke of Cumberland's Dragoons in 1746. By the next year, he was fighting as a Lieutenant in Flanders as a part of the War of the Austrian Succession. After this war, he joined the 20th Regiment of Foot where he became a friend of James Wolfe, who is remembered mainly for his victory over the French in Canada and establishing British rule there.

During the Seven Years' War, Howe's service first brought him to America. The North American chapter of the Seven Years War is known as the French and Indian War. His service in this conflict did much to raise his reputation. William commanded a regiment at the siege of Louisbourg and led a successful amphibious landing. This action carried out under fire won the attackers a flanking position and earned Howe his commander's praise.

Howe commanded the light infantry under Major General James Wolfe at the Battle of Quebec, Canada, on September 13, 1759. Wolfe chose Howe to lead a fighting ascent up a narrow goat's path to gain position on the Plains of Abraham, clearing the way for Wolfe's army to assemble before that battle. Wolfe was killed in battle that day but not before news of routing the French was carried to him. Howe's actions at the Plains of Abraham earned him the rank of Brigadier General. He earned further fame in the capture of Montreal under Jeffrey Amherst before returning to England. Howe also served in the capture of Belle Isle, off the French coast, in 1761. He was adjutant-general of the force that captured Havana in 1762.

In 1761, Howe was elected a Member of Parliament for Nottingham. This was not unusual, as the election of 1761 sent more than 60 army officers to the Commons. He was generally sympathetic to the colonies. He did oppose the Coercive Acts, and, in 1774, assured his constituents that he would resist active duty against the Americans. But when the time came and King George III asked in 1775, Howe and his brother Admiral Richard Howe reluctantly sailed for America.

Major General Howe arrived at Boston on May 15, at the head of the 4,000 additional troops sent to General Thomas Gage. Gage's orders were to clear the American Army and break their Siege of Boston. Howe's plan was to take Cambridge, but the Americans fortified the high ground above the town.

Howe's tactics were to crush the American's position by massive assault. He was thus in command at the Battle of Bunker Hill on June 17, 1775. He personally led the left flank of the attack three times, assuring his men he would not, "go a step further than where I go myself." During one blinding volley on the third assault Howe was the only man left standing.[2] His leadership on the field was outstanding, and the British did succeed in gaining their objective, but the cost was appalling. General Thomas Gage called it, "A dear bought victory, another such would have ruined us."

While Howe wasn't injured in the battle, it had a pronounced dispiriting effect on him. The daring, aggressive commander who had served with Wolfe became the cautious, reluctant General who was slow to seek direct confrontation. His concept that those in open rebellion were a small minority of Americans, who would fold with a display of force, was shattered. Howe's report to Lord Germain called for 19,000 additional troops and included the prophecy that, "…with a less force…this war may be spun out until England will be heartily sick of it."

The Battles for New York and New Jersey

On October 10, 1775, he replaced Lieutenant General Thomas Gage as Commander-in-Chief of the British Army in America and Gage returned to England. In April, 1776 the appointment was made permanent, although forces in Canada were placed under Guy Carleton. Howe successfully defeated General George Washington in the Battle of Long Island in the summer of 1776. As a result of his victory at Long Island, Howe became Sir William Howe when he was knighted into the Order of Bath by King George III. Some hold that had he pressed on August 27, the British victory would have been complete. But those same arguments hold that if the wind had turned earlier and the British ships sailed up the East River sooner that day, the revolution might have ender there and then.[3] But Howe did not press on and Washington was able to escape with almost his entire army across Manhattan island into New Jersey. In September 1776, Howe ordered the execution of Nathan Hale for espionage.

In December, 1776, George Washington, with the surviving remnants of the rebel army, broke a winter camp on Christmas Day and surprised Hessian regiments camped in the city of Trenton and routed them. One week later, Washington pressed the attack deeper into New Jersey at Princeton, where, due to extremely foggy weather conditions, he forced Howe and General Charles Cornwallis to retreat again, effectively turning the tide against the British forces.

In 1777, Howe made a fateful decision to abandon his assignment to capture the lower Hudson River from New York City northward, as part of the Saratoga Campaign, where he was to meet John Burgoyne attacking from Canada. This led to the capture of Burgoyne and his entire army. Howe had chosen instead to pursue Washington into Philadelphia. He succeeded in capturing the city temporarily, but Washington got away and entered winter encampment at Valley Forge. France encouraged by the American victory at Saratoga, entered the war on behalf of the Americans.

Howe resigned his command in 1778, and, on May 20, Sir Henry Clinton took over as commander-in-chief in North America. He returned to England. In 1782, he was sworn a Privy Counsellor. When his brother, Richard, died in 1799, he inherited the Irish title and became the 5th Viscount Howe. In 1814, he was governor of Plymouth, where he died. He is buried at Holly Road, Garden of rest in Twickenham, England.

Howe's professional soldier mentality of not acting too quickly played to the American tactics of hit and run and of quick engagements. Howe and his brother, Richard Howe, were commissioned By King George III to sail to the colonies and either bring peace or prosecute the end of the rebellion. Many of his officers held the fear that Americans would only fight defensively. Howe was known to want a decisive action and wind things up quickly.

Because George Washington fought the war defensively, much like Roman generals centuries before, Howe was forced to bring the battle to the rebels on their home ground, and in so doing was unable to bring the colonies in line with the Loyalist cause. Subsequently he was unable to win the war and the American victory established a nation where freedom is a birthright.