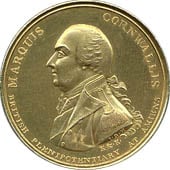 Coin commemorating Cornwallis' role in negotiating the Treaty of Amiens, 1802

Charles Cornwallis, 1st Marquess Cornwallis (December 31, 1738 – October 5, 1805) was a British military commander and colonial governor. In the United States, he is best remembered as a British general in the American War of Independence. As a member of the House of Lords he had supported most of the colonialists demands, but as a senior general he was dispatched with reinforcements in 1776. Although he was defeated, he is generally considered to have been the most able of the British generals who waged war against the rebel colonialists. His 1781 defeat by a combined American-French force at the Siege of Yorktown is considered the end of the war, although minor skirmishes continued for another two years.

In India, where he served two terms as Governor-General, he is remembered for promulgating the Permanent Settlement and for reforming the judicial and administrative systems. As Lord Lieutenant of Ireland, he argued for Catholic emancipation and also worked to rid the administration of corruption, as he had in India. He resigned in 1801 when the British government refused to grant Irish Catholics their civil rights. Despite his defeat at the hands of the 13 colonies, he is remembered as a competent administrator. In India, he won the Third Mysore War (1790-92) against Sultan Tipu, removing a significant challenge to the power of the British East India Company, even though this contradicted his own policy of not interfering in the affairs of the princely states. Born wealthy, Cornwallis did not have to spend his life serving his country, but was compelled to by his strong sense of duty.

Cornwallis was the oldest son 5th Baron Cornwallis (later 1st Earl Cornwallis) and was born at Grosvenor Square in London, even though his family's estates were in Kent. Cornwallis had all the advantages that money and family connections could bring. The Cornwallis family was established at Brome Hall, near Eye, in Suffolk, in the course of the fourteenth century, and members of it occasionally represented the county in the House of Commons during the next 300 years. Frederick Cornwallis, created a Baronet in 1627, fought for King Charles I, and followed King Charles II into exile. He was created Baron Cornwallis, of Eye in the County of Suffolk, in 1661, and his descendants by fortunate marriages increased the importance of the family.

Cornwallis' mother, Elizabeth, was the daughter of the 2nd Viscount Townshend and a niece of the Prime Minister, Sir Robert Walpole. His father was created Earl Cornwallis and Viscount Brome in 1753, at which point he was styled Viscount Brome. His Brother was Admiral Sir William Cornwallis. An uncle, Frederick, was Archbishop of Canterbury and another uncle, Edward, was a leading colonialist in Canada.

Charles was educated at Eton College—where he received an injury to his eye by an accidental blow while playing hockey, from Shute Barrington, afterwards Bishop of Durham—and Clare College, Cambridge. He obtained his first commission as Ensign in the 1st Foot Guards, on December 8, 1757. His military education then commenced, and after traveling on the continent with a Prussian officer, Captain de Roguin, Lord Brome, as he was then known, studied at the military academy of Turin. He also became a Member of Parliament in January 1760, entering the House of Commons for the village of Wye in Kent. He succeeded his father as 2nd Earl Cornwallis in 1762.

Throughout the Seven Years' War, Lord Cornwallis served four terms in different posts in Germany, interspersed with trips home. He served as a staff officer to Lord Granby in 1758. In 1765, he was assigned to the 85th Regiment of Foot and, after action at the Battle of Minden, was promoted to Captain before returning to England.

In 1771, he was again sent to Germany, this time for duty with the 12th (The East Suffolk) Regiment of Foot, and was promoted to Brevet Lieutenant-Colonel. He led his unit in the Battle of Villinghausen on July 15*ndash;July 16 1771, and was noted for his gallantry.

First term as Governor-general of India

After the war Cornwallis returned to Britain, and in 1786, he was appointed governor-general and commander in chief in India. He instituted land reforms and reorganized the British army and administration. In 1792, he defeated Tipu Sultan, the powerful sultan of Mysore. Cornwallis was given the title marquis in 1792, and returned to England the following year.

Cornwallis was only made Lord Lieutenant of Ireland in June 1798, just before the outbreak of the Irish Rebellion of 1798 between republican United Irishmen and the British Government.

Due to the execution of prisoners of war in Ballinalee after the Battle of Ballinamuck, he achieved local notoriety that lasts to this day. In the village, in the north Leinster county of Longford, the site of the executions is known as Bullys Acre.

However, while Lord Lieutenant he worked to eliminate corruption from the administration. He was also responsible for passing the Act of Union (1800) through Westminster, which formally united Ireland with Great Britain, a union which he believed would benefit Ireland by giving them representation in the British Parliament instead of in the separate Irish Parliament which was subordinate to Westminster. The Act of Union united the Anglican churches of England and Ireland but failed to grant Catholics the franchise, which resulted in Cornwallis' resignation. Ironically, having campaigned against corruption for much of his life, the legislation only passed through Parliament due to Cornwallis' reportedly bribing enough members of Parliament to support the bill.[1]

Second term as governor-general of India

He was reappointed governor-general of India in 1805, but died on October 5 of that year, soon after arriving in India.

His only son, Charles, Viscount Brome, (b. 1774), succeeded as 2nd Marquess Cornwallis. He married Lady Louisa Gordon, daughter of the 4th Duke of Gordon, had five daughters, and died on August 16, 1823, when the Marquessate became extinct. James Cornwallis, the Bishop of Lichfield and Coventry, succeeded as 4th Earl Cornwallis.