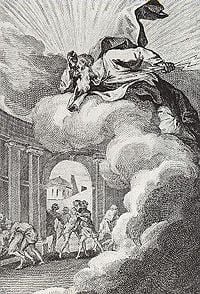 The term may include several sexual acts other than coital sex between a male and female.[1] Although not gender specific by definition, in common use "sodomy" generally refers to homosexual intercourse between males. The term is also sometimes used to describe human-animal sexual intercourse (also known as bestiality or zoophilia).

The English term "buggery" is very close in meaning to the term "sodomy," and is often used interchangeably in law and popular speech. In English law, "buggery" was used in the Buggery Act 1533, while section 61 of the Offences Against The Person Act 1861 used "sodomy" in the heading, but "buggery" in the text. Originally, it was derived from the word "Bulgarian," meaning the medieval Bulgarian sect of the Bogomils, which spread into Western Europe and was branded by the established church as particularly devoted to the practice of sodomy.[2]

Leviticus 18 lists various sexual crimes, which, according to verses 27 and 28, would result in the land being “defiled:”

for the inhabitants of the land, who were before you, committed all of these abominations, and the land became defiled;
otherwise the land will vomit you out for defiling it, as it vomited out the nation that was before you.

This is commonly linked to the Biblical account of Sodom, where the people were prone to gross sexual immorality, and, apparently, as a result were destroyed by God. However, there is textual support in Christian and Jewish scripture for the belief that the sins of Sodom were not necessarily or solely sexual in nature. In the Book of Ezekiel, God speaks through the prophet saying,

Behold, this was the iniquity of thy sister Sodom, pride, fullness of bread, and abundance of idleness was in her and in her daughters, neither did she strengthen the hand of the poor and needy. And they were haughty, and committed abomination before me: therefore I took them away as I saw good. (16:49-50, KJV).

Based on this, the thirteenth century Jewish scholar Nachmanides wrote, “According to our sages, they were notorious for every evil, but their fate was sealed for their persistence in not supporting the poor and the needy.” His contemporary Rabbenu Yonah expressed the same view: “Scripture attributes their annihilation to their failure to practice tzedakah [charity or justice].”[3]

According to other critiques, the sins of Sodom were related more to violation of hospitality laws than sexual sins. Genesis 19:5 says, “They called to Lot, ‘Where are the men who came to you tonight? Bring them out to us so that we may know them.’” The men are allegedly angels who had come to visit Lot, and the Bible also says in Genesis 19:4 that “all the men from every part of the city of Sodom—both young and old—surrounded the house.” Some scholars argue that the Hebrew text was mistranslated. The word for “have sex with” can also simply mean to “do violence to.” However, in Genesis 19:8 (KJV), Lot offers his virgin daughters to the mob in place of the angelic guests, which supports a sexual context. Another claim is that while the gender of the term for strangers in the text is male, that it does not necessarily denote the gender of the strangers themselves.

The Epistle of Jude in the New Testament echoes the Genesis narrative and recalls mainly the sexually immoral aspects of Sodom's sins:

just as Sodom and Gomorrah and the surrounding cities, which likewise indulged in sexual immorality and pursued unnatural desire, serve as an example by undergoing a punishment of eternal fire (v. 7, English Standard Version).

The phrase rendered “unnatural desire” is literally translated “strange flesh,” but it is not entirely clear what it refers to. The ESV translators supply one plausible paraphrase in making the phrase refer to the illicit sexual activity of the Genesis account, but another theory is that it is just a reference to the “strange flesh” of the intended rape victims, who were angels, not men.

About this time the Sodomites grew proud, on account of their riches and great wealth; they became unjust towards men, and impious towards God, in so much that they did not call to mind the advantages they received from him: they hated strangers, and abused themselves with Sodomitical practices (Antiquities 1.11.1—circa C.E. 96).[4]

The Qur'an makes a more explicit scriptural connection between homosexual aggression and Sodom. The city name "Sodom" does not appear there, but the Sodomites are referred to as “the people of Lut (Lot).” Lot is the nephew of the Hebrew/Arabic patriarch Abraham and, in the Judaic Sodom stories, is head of the only family allowed by God to survive Sodom's destruction. In the Qur'an, he is also the divinely appointed national prophet to his people. Since their national name was unrecorded and “people of Lot” was the only available designation, the Islamic equivalent of "sodomy" has become liwat, which could be roughly translated as “lottishness.”

In the Middle Ages, the terms "sodomite" and "buggery" were defined as homosexual practices, and the arguably gay Richard I of England was ordered by a priest to keep in mind "the sin of Sodom."

Examination of trials for rape and sodomy during the eighteenth century at the Old Bailey in London show the treatment of rape to have been lenient, while the treatment of sodomy to have been generally severe. From the 1780s the number of cases grew. Blackmail for sodomy also increased and was made a capital crime.

In France in the eighteenth century, sodomy was still theoretically a capital crime, and there are a handful of cases where sodomites were executed. However, in several of these, other crimes were involved as well—for instance, one involves a man who had supposedly murdered a man who resisted his advances.[5] Records from the Bastille and the police lieutenant d'Argenson, as well as other sources, show that many who were arrested were exiled, sent to a regiment, or imprisoned in places (generally the Hospital) associated with morals crimes such as prostitution. Of these, a number were involved in prostitution or had approached children, or otherwise gone beyond merely having homosexual relations. Ravaisson (a nineteenth century writer who edited the Bastille records) suggested that the authorities preferred to handle these cases discreetly, lest public punishments in effect publicize "this vice." Periodicals of the time sometimes casually named known sodomites, and at one point even suggested that sodomy was increasingly popular. This does not imply that homosexuals necessarily lived in security—specific police agents, for instance, watched the Tuileries, even then a known cruising area. But, as with much sexual behavior under the Old Regime, discretion was a key concern on all sides (especially since members of prominent families were sometimes implicated)—the law seemed most concerned with those who were the least discreet.

Today, sodomy related laws have been repealed or judicially struck down in all of Europe.

In the 1950s, all states had some form of law criminalizing sodomy, and in 1986 the United States Supreme Court ruled that nothing in the United States Constitution bars a state from prohibiting sodomy. However, state legislators and state courts had started to repeal or overturn their sodomy laws, beginning with Illinois in 1961, and thus in 2003, only 10 states had laws prohibiting all sodomy, with penalties ranging from 1 to 15 years imprisonment. Additionally, four other states had laws that specifically prohibited same-sex sodomy. That year, the United States Supreme Court reversed its 1986 Bowers v. Hardwick ruling and in Lawrence v. Texas, invalidated these laws as being an unconstitutional violation of due process, with Sandra Day O'Connor's concurring opinion arguing that they violated equal protection.

However, Lawrence v. Texas did not change the Uniform Code of Military Justice Article 125 that bans all servicemen and women from engaging in “sodomy.” More recently, however, the ban on consensual sodomy was overturned, and only forcible sodomy remains an offense. The United States Armed Forces Code defines this offense as follows:

Any person subject to this chapter who engages in unnatural carnal copulation with another person of the same or opposite sex by unlawful force or without the consent of the other person is guilty of forcible sodomy and shall be punished as a court-martial may direct.[6]

This trend among Western nations to decriminalize sodomy has not been followed in all other regions of the world (Africa, some parts of Asia, Oceania and even western countries in the Caribbean Islands), where sodomy often remains a serious crime. For example, male homosexual acts, at least in theory, can result in life imprisonment in Barbados and Guyana.

In Africa, male homosexual acts remain punishable by death in Mauritania, Sudan, and some parts of Nigeria and Somalia. Male and sometimes female homosexual acts are minor to major criminal offenses in many other African countries; for example, life imprisonment is a prospective penalty in Sierra Leone, Tanzania and Uganda. A notable exception is South Africa, where same-sex marriage is legal.

In Asia, male homosexual acts remain punishable by death in Iran, Saudi Arabia, Brunei, the United Arab Emirates, and Yemen; but anti-sodomy laws have been repealed in Israel (which recognizes but does not perform same-sex marriages), Japan, Kazakhstan, the Philippines, and Thailand. Additionally, life imprisonment is the formal penalty for male homosexual acts in Bangladesh, the Maldives, Myanmar, Pakistan, and Qatar.