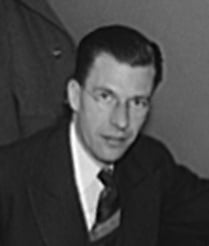 John Kenneth Galbraith (October 15, 1908 – April 29, 2006) was an influential Canadian-American economist. He was a Keynesian and an institutionalist, a leading proponent of government involvement in solving social issues. He taught at Harvard University for many years.

Galbraith was a prolific author who produced four dozen books and over a thousand articles on various subjects. Among his most famous works was a popular trilogy on economics, American Capitalism (1952), The Affluent Society (1958), and The New Industrial State (1967). Galbraith was active in politics, serving in the administrations of Franklin D. Roosevelt, Harry S. Truman, John F. Kennedy, and Lyndon B. Johnson; and among other roles served as U.S. ambassador to India under President Kennedy.

He was one of a few two-time recipients of the Presidential Medal of Freedom. He received one from President Harry S. Truman in 1946, and another from President Bill Clinton in 2000. He was also awarded the Padma Vibhushan, India's second highest civilian award, for his contributions to strengthening ties between India and the United States. His concern for public welfare continued throughout his long life. His ideas stirred controversy, particularly among those who regarded government spending as more part of the problem than the solution, and that to be successful a business must market its products and create demand to match the supply. Without acknowledging the inherent selfishness in human beings to date, solutions cannot be found to the concerns Galbraith had.

John Kenneth Galbraith was born on October 15, 1908, to Canadians of Scottish descent, William Archibald Galbraith and Sarah Catherine Kendall. He was born in Iona Station, Ontario, Canada, and was raised in Dutton, Ontario. His father was a farmer and school teacher and his mother a political activist.

In 1937, Galbraith became a United States citizen. In the same year, he took a year-long fellowship at Cambridge University, England, where he became influenced by John Maynard Keynes.

Galbraith married Catherine Merriam Atwater, whom he met while she was a Radcliffe student, on September 17, 1937. They resided in Cambridge, Massachusetts, and had a summer home in Newfane, Vermont. They had four sons: J. Alan Galbraith, Douglas Galbraith, Peter W. Galbraith, and James K. Galbraith.

During World War II, Galbraith was America's "price czar," charged with keeping inflation from crippling the war effort. He served as deputy head of the Office of Price Administration. Although little appreciated at the time, the actual power he wielded in this position was so great that he joked later that the rest of his career had been downhill.

At the end of the war, he was asked to be one of the leaders of the Strategic Bombing Surveys of both Europe and Japan. These reports concluded that the costs of bombing had outweighed the anticipated benefits and did not shorten the war in the case of Germany. However, the war against Japan had proved beyond question the success of bombing and went on to call for additional funding and the creation of an independent American Air Force (AAF). After the war, he became an adviser to post-war administrations in Germany and Japan.

He received the Presidential Medal of Freedom in 1946, from President Harry S. Truman.

During his time as an adviser to President John F. Kennedy, Galbraith was appointed as U.S. ambassador to India from 1961 to 1963. There, he became close to Prime Minister Jawaharlal Nehru, and extensively advised the Indian government on economic matters. He harshly criticized Louis Mountbatten, the last Viceroy of British rule, regarding Mountbatten's passive role in the Partition of India in 1947, and the bloody partition of the Punjab and Bengal.

While in India, he helped establish one of the first computer science departments at the Indian Institute of Technology in Kanpur, Uttar Pradesh. Even after leaving office and returning to his academic career at Harvard, Galbraith remained a friend and supporter of India, and hosting a lunch for Indian students at Harvard every year on graduation day.

In 1972, Galbraith served as president of the American Economic Association.

On April 29, 2006, Galbraith died at Mount Auburn Hospital in Cambridge, Massachusetts of natural causes, after a two-week stay in the hospital.

Although he had served as president of the American Economic Association, Galbraith was considered an iconoclast by many economists. This is because he rejected the technical analyses and mathematical models of neoclassical economics as being divorced from reality. Following Thorstein Veblen, he believed that economic activity could not be distilled into inviolable laws, but rather was a complex product of the cultural and political milieu in which it occurs. In particular, he believed that important factors such as advertising, the separation between corporate ownership and management, oligopoly, and the influence of government and military spending had been largely neglected by most economists because they were not amenable to axiomatic descriptions. In this sense, he worked as much in political economy as in classical economics.

Galbraith was a zealous opponent of those who advocated laissez-faire approach as the cure for all social ills. He was an important figure in twentieth century institutional economics, providing perhaps the exemplar institutionalist perspective on economic power.[1] He believed that government should protect citizens by actively intervening in economic affairs.

Galbraith's work included several best selling books throughout the 1950s and 1960s. After his retirement, he remained in the public awareness by continuing to write new books and revise his old works. In addition to his books, he wrote hundreds of essays and a number of novels. However, from the Nixon presidency onwards, he was regarded as somewhat of an anachronism, as the public discourse centered more and more around the pro-market, small-government, anti-regulation, and low-tax orthodoxies which came to prominence in the 1980s.

In American Capitalism: The Concept of Countervailing Power, published in 1952, Galbraith outlined how the American economy in the future would be managed by a triumvirate of big business, big labor, and an activist government. Galbraith termed the reaction of lobby groups and unions "countervailing power." He contrasted this arrangement with the previous pre-depression era where big business had a relatively free rein over the economy.

In The New Industrial State (1967), Galbraith argued that very few industries in the United States fit the model of perfect competition. A third related work was Economics and the Public Purpose (1973), in which he expanded on these themes by discussing, among other issues, the subservient role of women in the unrewarded management of ever-greater consumption, and the role of technostructure in large firms in influencing perceptions of sound economic policy aims.

In The Affluent Society, Galbraith asserted that classical economic theory was true for the eras before the present, which were times of "poverty." Now, however, Americans have moved from a state of poverty into an age of "affluence," and for such an age, a completely new economic theory is needed. He claimed that, to become successful, post-World War II America should make large investments in items such as highways and education, using funds from general taxation.

Galbraith's main argument was that as society becomes relatively more affluent, so private business must "create" consumer wants through advertising, and while it generates artificial affluence through the production of commercial goods and services, the "public sector" becomes neglected as a result. He pointed out that while many Americans were able to purchase luxury items, their parks were polluted and their children attended poorly maintained schools. He argued that markets alone will underprovide (or fail to provide at all) for many public goods, whereas private goods are typically "overprovided" due to the process of advertising, which created artificial demand above individuals' basic needs.

He proposed curbing the consumption of certain products through greater use of consumption taxes, arguing this could be more efficient than other forms of taxes, such as labor or land taxes.

Galbraith's major proposal was a program he called "investment in men"—a large-scale governmental education program to influence the wants and tastes of the citizenry. He advocated developing a "New Class" of citizen, "with its emphasis on education and its ultimate effect on intellectual, literary, cultural and artistic demands." Galbraith wished to entrust the future of the American republic into the hands of the members of this class, asserting that their ability to see beyond "the conventional wisdom" entitled them to govern. It was in this book that he claimed to have coined the phrase "conventional wisdom" (The Affluent Society, Chapter 2).

Galbraith also critiqued the assumption that continually increasing material production is a sign of economic and societal health. Because of this Galbraith is sometimes considered one of the first post-materialists.

The Affluent Society contributed to public policy to a significant degree, given that Galbraith had the ear of President Kennedy. This influence is exemplified in the "war on poverty," the government spending policy first brought on by the administrations of Kennedy and Johnson.[2]

Many of Galbraith's best known works raised controversies, particularly with libertarians and those of the Austrian school.

The Affluent Society in particular drew sharp criticism from free-market supporters at the time of its publication. Author and capitalism advocate Ayn Rand stated that "Galbraith advocates… medieval feudalism."[3]

Milton Friedman in Friedman on Galbraith, and on Curing the British Disease (1977), viewed Galbraith as a twentieth century version of the early nineteenth century Tory radical of Great Britain. He asserted that Galbraith believed in the superiority of aristocracy and in its paternalistic authority, that consumers should not be allowed choice and that all should be determined by those with "higher minds."[4]

Friedrich Hayek made the most fundamental criticism of Galbraith's argument against creating consumer wants artificially. Hayek argued that our most significant wants do not originate with the individual, they are not innate but learned from our cultural experiences. We enjoy art, literature, and music as a result of our learning experiences. So, wrote Hayek, "to say that a desire is not important because it is not innate is to say that the whole cultural achievement of man is not important."[5]

Galbraith was one of America's best-known twentieth century economists, known for his support of government action to solve social problems. His close connections to leading politicians gave power to his ideas, notably the "war on poverty" efforts of John F. Kennedy and Lyndon B. Johnson.

He has been considered by many as the "Last American Institutionalist," as his ideas were rather outside the mainstream of economic theory of his days. Although not explicitly acknowledged, many modern economists have followed Galbraith's ideas. These include James M. Buchanan, and "Public Choice" school of economics, and Herbert A. Simon, and the "New Institutionalist" school.

Galbraith was one of the most widely read economists in the United States. In 1999, his book, The Affluent Society, was picked as No. 46 on the list of twentieth century's 100 best English-language works of non-fiction.