Ecologically, skates are important in food chains, consuming smaller fish and crustaceans, as well as mollusks, and being consumed by sharks, among other predators. There is concern that overfishing of sharks in some areas has led to a disruption of this delicate balance, with a resultant increase in some skate and ray populations endangering the scallop populations (Schmid 2007). For humans, skates with their unique form and undulating movements add to the wonder of nature and the large pectoral fins of skates are edible and are eaten by people. Some skate species, such as the common skate and white skate, are considered to be critically endangered.

The Chondrichthyes or "cartilaginous fishes" are jawed fish with paired fins, paired nostrils, scales, two-chambered hearts, and skeletons made of cartilage rather than bone. They are divided into two subclasses: Elasmobranchii (sharks, rays, and skates) and Holocephali (chimaera, sometimes called ghost sharks). The Elasmobranchii are sometimes divided into two superorders, Selachimorpha (sharks) and Batoidea or Batidoidimorpha (rays, skates, sawfish). Nelson (1994) notes that there is growing acceptance of the view that sharks and rays together form a monophyletic group (superorder Euselachii), and sharks without rays are a paraphyletic group. 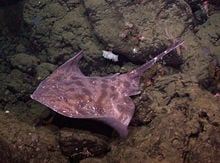 Skates are benthic (bottom-dwelling) and are found throughout the world, in all oceans from Arctic to Antarctic waters, from continental shelves down to the abyssal zone. They are carnivorous, feeding mostly on smaller fish and crustaceans.

The common skate, Dipturus batis, is the largest found in British waters. It has a long, pointed snout. However, the most common skate in British seas is the thornback ray, Raja clavata. They are frequently caught by trawling. Common skate and white skate are assessed as Critically Endangered by IUCN (World Conservation Union).

Skate winglike pectoral fins are consumed by people, and Herbst (2001) lists that "their delicious flesh is firm, white and sweet—not unlike that of scallop. Herbst notes that they can be prepared by poaching, baking, and frying. However, the Marine Conservation Society (2007) lists skates as "fish to avoid" eating—unless certain that one is consuming a species with a stable population—because in general skates are highly vulnerable to exploitation given their slow growth, high age at maturity, and low reproductive rates. Of particular concern in this regard is the larger skate species, and in particular the long nosed skates like the common skate.

Retrieved from https://www.newworldencyclopedia.org/p/index.php?title=Skate&oldid=1081650
Categories:
Hidden category:
This page was last edited on 9 October 2022, at 09:24.
Content is available under Creative Commons Attribution/Share-Alike License; additional terms may apply. See Terms of Use for details.