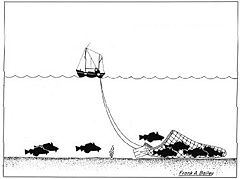 Trawling is a method of fishing that involves pulling a large fishing net through the water behind one or more boats. The net that is used for trawling is called a trawl. The boats that are used for trawling are called trawlers. Trawlers vary in size; from small open boats with only 30 horsepower (hp) to large factory trawlers with over 10,000 hp. Trawling can be carried out by one trawler or by two trawlers fishing cooperatively (pair trawling).

There are two types of trawling: bottom trawling and midwater trawling. Damage to the seabed (primarily by bottom trawling) and by-catch (untargeted fish and under sized fish, both of them are unmarketable) are considered to be two major problems of trawling. Change of mesh size and net structure has been introduced to minimize the by-catch. Preservation of the sea bed, including the spawning ground of fish, is managed by various regulations in some counties.

Trawling can be contrasted with trolling, where baited fishing lines are drawn through the water instead of trawls. Trolling is used both for recreational and commercial fishing whereas trawling is used mainly for commercial fishing, as the idea is to maximize and increase the chances of a big catch with a larger net.

Trawling just above this bottom section is called demersal trawling.

When two boats are used (pair trawling), the horizontal spread of the net is provided by the boats with one, or in the case of Pelagic trawling, two warp's attached to each boat. However, single-boat trawling is more common. Here, the horizontal spread of the net is provided by trawl doors (also known as "otter boards"). Trawl doors are available in various sizes and shapes, and may be specialized to keep in contact with the sea bottom (bottom trawling), or to remain elevated in the water. In all cases, doors essentially act as wings, using a hydrodynamic shape to provide horizontal spread. As with all wings, the towing vessel must go at a certain speed for the doors to remain standing and functional. This speed varies, but is generally in the range of 2.5-4.0 knots.

Trawls are tunnel shaped nets that have a closed off tail where the fish are collected and is open on the top end as the mouth. The vertical opening of a trawl net is created using flotation on the upper edge ("floatline") and weight on the lower edge ("footrope") of the net's mouth. The configuration of the footrope varies based on the expected sea bottom shape. The more uneven the sea bottom, the more robust the footrope configuration must be to prevent net damage. This is used to catch shrimp, shell fish, cod, scallops and many others.

Trawl nets can also be modified, such as changing mesh size, to help with marine research of ocean bottoms.[1] 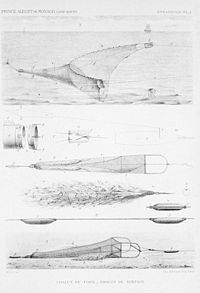 Although trawling today is heavily regulated in some nations, it remains the target of many protests by environmentalists. Environmental concerns related to trawling refer to two areas: a perceived lack of selectivity and the physical damage done to the seabed.

Since the practice of trawling started, there have been reports of the lack of selectivity of trawling. Trawl nets pick up all fish caught in the sweep, including marketable and undesirable fish, and fish of legal and illegal size. Any part of the catch which cannot be used is considered by-catch, some of which is killed accidentally by the trawling process. By-catch commonly includes species such as dolphins, sea turtles, and sharks.

Many studies have documented the often large volumes of by-catch that are discarded. For example, researchers conducting a three-year study in the Clarence River found that an estimated 177 tons of by-catch (including 77 different species) were discarded each year.[2]

Size selectivity is controlled by the mesh size of the "cod-end"—the part of the trawl where fish are retained. Fishermen complain that a mesh size which allows undersized fish to escape also allows a proportion of legal-landing sized fish to escape as well. There are a number of "fixes," such as tying a rope around the "cod-end" to prevent the mesh from opening fully, which have been developed to work around technical regulation of size selectivity. One problem is when the mesh gets pulled into narrow diamond shapes (rhombuses) instead of squares.

The capture of undesirable species is a recognized problem with all fishing methods and unites environmentalists, who do not want to see fish killed needlessly, and fishermen, who do not want to waste their time sorting marketed fish from their catch. A number of methods to minimize this have been developed for use in trawling. By-catch reduction grids or square mesh panels of net can be fitted to parts of the trawl, allowing certain species to escape while retaining others.

Studies have suggested that shrimp trawling is responsible for the highest rate of by-catch.[3] 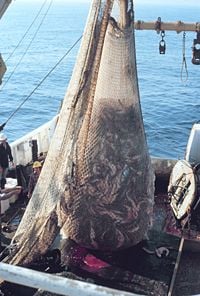 Trawling is an environmentally disputed fishing technique. Bottom trawling can cause significant damage to the seafloor; coral shattering, boulders being dragged along the seafloor causing damage to habitats and removal of seaweed can all be unintentional side-effects of trawling. Because bottom trawling involves towing heavy fishing gear over the seabed it can cause large scale destruction on the ocean bottom.

The primary sources of impact are the doors, which can weigh several tons and create furrows if dragged along the bottom. Foot ropes that are attached to these doors usually remain in contact with the bottom across the entire lower edge of the net, also causing damage. Depending on the configuration, the footrope may turn over large rocks or boulders, disturb or damage sessile organisms or rework and re-suspend bottom sediments.

The focal qualm of trawl gear is the weight of damage caused to the ocean floor. Opponents of trawl gear argue that the impact of trawl nets is widespread, intense, and long-lasting. Defenders of trawl gear maintain that impact is mostly limited and of low intensity compared to natural events. However, it should be noted that most areas with significant natural sea bottom disturbance events are in relatively shallow water. In mid to deep waters, bottoms trawlers are the only significant area wide events and the destruction has been viewed as clear-cutting the bottom. These impacts result in decreases in species diversity and ecological changes towards more opportunistic organisms.

Bottom trawling on soft sea bottoms stir up sediments placing a lot of suspended solids into the water column. The magnitude of the problem can be visualized by noting that one bottom trawler put more than ten times the amount of suspended solids pollution per hour into the water column, than all the suspended solids pollution from all the sewerage, industrial, river and dredge disposal operations in Southern California combined.[4] These turbidity plumes can be seen on Google Earth in areas where they have some high resolution offshore photos (see Bottom trawling for an example). When the turbidity plumes from bottom trawlers are below a thermocline, the surface may not be impacted, but less visible impacts can still occur, such as persistent organic pollutant transfer into the pelagic food chain.

As a result of these processes, a vast array of species are threatened around the world. In particular, the extent of coral reef damage has been a focal point of research into trawling. Trawling can directly kill coral reefs by breaking up reefs and causing sediment deposition, which buries corals. In addition, trawling can kill corals indirectly by wounding coral tissue, leaving the reefs vulnerable to fatal infections. The net effect of fishing practices on global coral reef populations is suggested by many scientists to be alarmingly high.[5] Published research has shown that benthic trawling destroys the cold-water coral Lophelia pertusa, an important habitat for many deep-sea organisms.[6]

Midwater (pelagic) trawling is a much "cleaner" method of fishing, in that the catch usually consists of just one species and does not physically damage the sea bottom. However, environmental groups have raised concerns that this fishing practice may be responsible for significant volumes of by-catch, particularly the capture of cetaceans (dolphins, porpoises, and whales).[7]

In light of the environmental concerns surrounding trawling, many governments have debated policies that would regulate the practice.

Other uses of the word "trawl"

The noun "trawl" has many possibly confusing meanings in commercial fisheries. For example, two or more lobster pots that are fished together may be referred to as a trawl. In some older usages "trawling" meant "long-line fishing"; that usage occurs in Rudyard Kipling's book Captains Courageous. (This use is perhaps confused with trolling, where a baited line is trailed behind a boat)

The word "trawling" has come to be used in a number of non-fishing contexts, usually meaning indiscriminate collection with the intent of picking out the useful bits. For instance, in law enforcement it may refer to collecting large records of telephone calls hoping to find calls made by suspects. The word "trawling" occurs frequently in general literature and is used to mean searching through literature for information more often than it means catching fish.