Fisheries management refers to a governmental system of management for the protection and sustainable development of biological resources.

The control of fisheries production has been exercised in many places around the world for hundreds of years. For example, the Māori people, residents of New Zealand for about the last 700 years, had strict rules in their traditional fishing activities about not taking more than could be eaten and throwing back the first fish caught (as an offering to Tangaroa, god of the sea). Another longstanding example is the North Norwegian fishery off the Lofoten islands, where a law has existed for more than 200 years to control fishing activity; in this case, the increase in the number of fishermen caused problems that necessitated management. To avoid gear collision, gillnetters and longliners are separated and not allowed to fish in the same grounds south of Lofoten. Similar kinds of fisheries management have been practiced in many places of the world, which often involve aspects such as restrictions on fishing seasons, location, and species.

Fishery management in the pre-modern era has traditionally been organized by local fishing communities. Their practices have often been connected with religious beliefs, rituals, and customs.

These forms of community based fishery management, however, encountered various challenges in the modern era as each community, and their marine resources, became a part of national or global economy and fisheries were managed primarily from the perspective of economic growth, with little to no attention given to ecological sustainability.

Governmental resource protection-based fisheries management is a relatively new idea, first developed for the North European fisheries after the first Overfishing Conference held in London in 1936. In 1957 the British fisheries researchers, Ray Beverton and Sidney Holt, published a seminal work on North Sea commercial species fisheries dynamics.[1] The work was later (in the 1960s) used as a theoretical platform for the new management schemes set up in North European countries.

After some years away from the field of fisheries management, Ray Beverton reassessed his earlier work and in a paper given at the first World Fisheries Congress in Athens in 1992, he criticized some of the concepts that he had earlier laid out in "The Dynamics of Exploited Fish Populations" and expressed concern at the way his and Sydney Holt's work has been misinterpreted and misused by so many fishery biologists and managers during the previous 30 years.[2] Nevertheless, the institutional foundation for modern fishery management had been laid.

There are various political goals in fisheries management; however, these objectives can conflict with one another. Typical political objectives include: 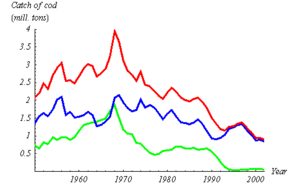 International agreements are required in order to regulate fisheries taking place in areas outside national control. The desire for agreement on this and other maritime issues led to the three conferences on the Law of the Sea, and ultimately to the treaty known as the United Nations Convention on the Law of the Sea (UNCLOS). Concepts such as exclusive economic zones (EEZ, extending 200 nautical miles (370 km) from the nation's coasts; if a continental shelf continues, EEZ is extended beyond 200 nautical miles) allocate certain sovereign rights and responsibilities for resource management to individual countries.

There are a number of situations that need additional intergovernmental coordination. For example, in the Mediterranean Sea and other relatively narrow bodies of water, EEZ of 200 nautical miles are irrelevant, yet there are international waters beyond the 12-nautical-mile (22 km) line of coastal sovereignty. International agreements, therefore, must be worked out for fishery management in the international waters of the narrow sea.

There are also issues with straddling fish stocks. Straddling stocks are fish stocks that migrate through, or occur in, more than one economic exclusion zone. Here sovereign responsibility must be worked out in collaboration with neighbouring coastal states and fishing entities. Usually this is done through the medium of an intergovernmental regional organisation set up for the purpose of coordinating the management of that stock.

UNCLOS does not prescribe precisely how fisheries that occur solely in international waters should be managed, and there are several new fisheries (such as high seas bottom trawling fisheries) that are not yet subject to international agreement across their entire range. Both of these issues came to a head within the United Nations in 2004 and the UN General Assembly issued a resolution on Fisheries in November 2004 which set the scene for the further development of international fisheries management law.

When it comes to controlling the activities of individual fishers or fishing operations (vessels or companies), available management means can be sorted into four categories:

Many countries have set up Ministries and Government Departments, named "Ministry of Fisheries" or similar, controlling aspects of fisheries within their exclusive economic zones.

According to a 2008 UN report, the world's fishing fleets are losing $50 billion USD each year through depleted stocks and poor fisheries management. The report, produced jointly by the World Bank and the UN Food and Agriculture Organization (FAO), asserts that half the world's fishing fleet could be scrapped with no change in catch. In addition, the biomass of global fish stocks have been allowed to run down to the point where it is no longer possible to catch the amount of fish that could be caught.[3]

Traditional management practices aim to reduce the number of old, slow-growing fish, leaving more room and resources for younger, faster-growing fish. Most marine fish produce huge numbers of eggs and larvae, and the assumption has been that the younger spawners will produce plenty of viable larvae.[4]

However, recent (2005) research on rockfish shows that large, elderly females are far more important than younger fish in maintaining productive fisheries. The larvae produced by these older maternal fish grow faster, survive starvation better, and are much more likely to survive than the offspring of younger fish. Failure to account for the role of older fish in maintaining healthy populations may help explain recent collapses of some major US West Coast fisheries. Recovery of some stocks is expected to take decades. One way to prevent such collapses may be to establish marine reserves, where fishing is not allowed and fish populations age naturally. 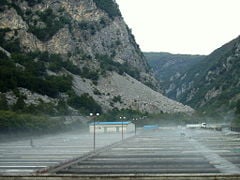 According to marine ecologist Chris Frid, the fishing industry has been keen to identify pollution and global warming as the causes of unprecedented low fish levels in recent years. But it is clear that overfishing has also altered the way the ecosystem works. "Everybody would like to see the rebuilding of fish stocks and this can only be achieved if we understand all of the influences, human and natural, on fish dynamics.” Frid adds: “Fish communities can be altered in a number of ways, for example they can decrease if particular sized individuals of a species are targeted, as this affects predator and prey dynamics. Fishing, however, is not the sole perpetrator of changes to marine life—pollution is another example… No one factor operates in isolation and components of the ecosystem respond differently to each individual factor.”[5]

Aquaculture, including artificial hatching and fish farming, can be an important part of fishery management. However, aquaculture is still in its early stages of development. Complete life cycle farming, from hatching to spawning, is successful only for a few species for the mechanisms and conditions necessary for the vast majority of species are still unknown. The development of aquaculture will require further research and public support.

According to fisheries scientist Milo Adkison (2007), the primary limitation in fisheries management is the absence of quality data. Fisheries management decisions are often based on population models, but the models require quality data to be effective. More simple models for analysis and better quality of data can help scientists and fishery managers make more effective decisions in fishery management.[7]