A fishing net or fishnet is a net that is used for fishing. Fishing nets are made of mesh usually formed by knotting a relatively thin thread. Modern nets are usually made of artificial polyamides like nylon, although nets of organic polyamides, such as wool or silk thread, were common until recently and are still used.

A variety of fishing nets have been developed since antiquity. Local net fishing has been conducted over thousands of years, using nets made with locally available material. Modern commercial net fishing, however, raise a number of issues including the sustainable development of fishery and environmental concerns. Nets with smaller mesh catch undersized, un-marketable, targeted and un-targeted fish. Those unwanted fish are thrown away as "waste." Fishing industries are now beginning to develop nets with larger mesh size to reduce such "waste."[1][2][3] Concern has also been raised about the damage which bottom trawling inflicts upon seabed communities. On November 18, 2004, the United Nations General Assembly urged nations to consider temporary bans on high seas bottom trawling. 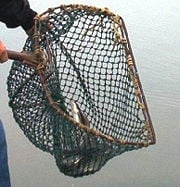 Hand nets are held open by a hoop and are possibly on the end of a long stiff handle. They have been known since antiquity and may be used for sweeping up fish near the water surface like muskellunge and northern pike. When such a net is used by an angler to help land a fish it is known as a landing net.[4] In England, for example, hand netting is the only legal way of catching eels and has been practiced for thousands of years on the River Parrett and River Severn.

Cast nets are small round nets with weights on the edges which is thrown by the fisher. Sizes vary up to about four meters (13 feet) in diameter. The net is thrown by hand in such a manner that it spreads out on the water and sinks. Fish are caught as the net is hauled back in.[5] 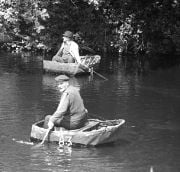 Coracles on the River Teifi, Wales 1972.

Coracle fishing (a small, lightweight boat) is performed by two men, each seated in a coracle, plying his paddle with one hand and holding a shared net with the other. When a fish is caught, each hauls up his end of the net until the two coracles are brought to touch and the fish is secured. 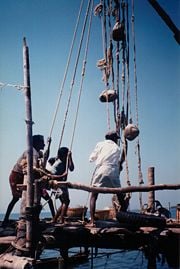 The Chinese fishing nets (Cheena vala) of Fort Kochi (Fort Cochin) in the City of Kochi (Cochin) located in the Indian State of Kerala, are fixed land installations for an unusual form of fishing—shore operated lift nets.[6] Huge mechanical contrivances comprises a cantilever with an outstretched net suspended over the sea 20 m (65.6 feet) long and ten m (32.8 feet) high and large stones suspended from ropes as counterweights at the other end. Each installation is operated by a team of up to six fishermen.

The system is sufficiently balanced that the weight of a man walking along the main beam is sufficient to cause the net to descend into the sea. The net is left for a short time, possibly just a few minutes, before it is raised by pulling on ropes. The catch is usually modest: a few fish and crustaceans—these may be sold to passers by within minutes.

The system of counterweights is most ingenious. Rocks, each 30 cm (11.8 inch) or so in diameter are suspended from ropes of different lengths. As the net is raised, rocks alternately come to rest on a platform thereby keeping everything in balance.

Each installation has a limited operating depth. Consequently, an individual net cannot be continually operated in tidal waters. Different installations will be operated depending on the state of the tide.

It is received wisdom that the nets are Chinese in origin. This is not as improbable as the 5,000 km (3,100 mile) distance from China might suggest—Kochi is a very important center for the spice trade attracting traders from far and wide. Some suppose that the nets were introduced by the Chinese explorer Zheng He.

The Chinese fishing nets have become a very popular tourist attraction, their size and elegant construction is very photogenic and the slow rhythm of their operation is quite hypnotic. In addition, catches can be purchased individually and need to be taken only a short distance to a street entrepreneur who will cook it.

Oil painting of gillnetting, The salmon fisher by Eilif Peterssen.

Gillnetting is a common fishing method used by commercial fishermen of all the oceans and in some freshwater and estuary areas. Because gillnets can be so effective their use is closely monitored and regulated by fisheries management and enforcement agencies. Mesh size, twine strength, as well as net length and depth are all closely regulated to reduce bycatch of non-target species. Most salmon fisheries in particular have an extremely low incidence of catching non-target species.

Gillnet, the name of the net used, illustrates the method used to snare target fish. They try to swim through deliberately sized mesh openings but are unable to squeeze through swimming forward. Once in this position, they are prevented from backing out due to the tendency for their gills to become caught. This effectively traps them.

Drift nets can range in length from 25 m (82 feet) to four kilometer (2.5 miles). Nets of up to 50 km (31 mile) have been set in recent times.[1] Because drift nets are not anchored to the sea bottom or connected to a boat, they are sometimes lost in storms and become ghost nets.

A stake net is a form of net for catching salmon. It consists of a sheet of network stretched on stakes fixed into the ground, generally in rivers or where the sea ebbs and flows, for entangling and catching the fish.

A trammel is a fishing net set vertically in the water with three layers. The inner layer is of a finer mesh than the outer layers.

A seine is a large fishing net that hangs vertically in the water by attaching weights along the bottom edge and floats along the top. Boats equipped for seine fishing are called seiners. Seine fishing is fishing using a seine.

Seine nets are usually long flat nets like a fence that are used to encircle a school of fish, while a boat drives around the fish in a circle.

There are two main types of seine nets: purse seines and Danish seines.

A common type of seine is a purse seine, named such because along the bottom are a number of rings. A rope passes through all the rings, and when pulled, draws the rings close to one another, preventing the fish from "sounding," or swimming down to escape the net. This operation is similar to a traditional style purse, which has a drawstring.

The purse seine is a preferred technique for capturing fish species which school, or aggregate, close to the surface: such as sardines, mackerel, anchovies, herring, certain species of tuna (schooling); and salmon soon before they swim up rivers and streams to spawn (aggregation).

A Danish seine, also occasionally called an anchor seine, has a conical netting body, two relatively long wings and a bag. The drag lines extending from the wings are long, so they can encircle a large area.

A Danish seine is similar to a small trawl net, but the wire warps are much longer and there are no otter boards The seine boat drags the warps and the net in a circle around the fish. The motion of the warps herds the fish into the central net.

Structure of a benthic otter trawl

Bottom trawling has raised issues from perspectives of both environmental concern and sustainable development of fishery. Bottom trawling can destroy sea bed, habitats of diverse marine life, which is often a spawning ground of some species. Some countries regulate bottom trawling within their jurisdictions.

Bottom fishing has operated for over a century on heavily fished grounds such as the North Sea and Grand Banks. Although overfishing has caused huge ecological changes to the fish community on the Grand Banks, concern has been raised recently about the damage which benthic trawling inflicts upon seabed communities. A species of particular concern is the slow growing, deep water coral Lophelia pertusa. This species is home to a diverse community of deep sea organisms, but is easily damaged by fishing gear. On November 18, 2004, the United Nations General Assembly urged nations to consider temporary bans on high seas bottom trawling. Some countries restrict bottom trawling within their jurisdictions.

Nets with a small mesh size catch non-marketable, undersized targeted fish, un-targeted fish as well as targeted fish. Those unwanted fish are disposed as "waste" back into the ocean. From the perspective of sustainable development, fishing industries are developing nets with larger mesh, which reduces unwanted catch of undersized fish.

Ghost nets are fishing nets that have been left or lost in the ocean by fishermen.

These nets, often nearly invisible in the dim light, can be left tangled on a rocky reef or drifting in the open sea. Maybe they were lost in a storm, or simply forgotten. They entangle and kill fish, dolphins, sea turtles, sharks, dugongs, crocodiles, penguins and various seabirds, crabs and other creatures 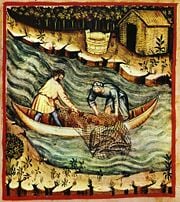 Fishing is one of the oldest, widely used methods of acquiring food. Description about fishing net appeared in literatures since antiquity in diverse civilizations. Some of the records are as follows.

Between 177 and 180 the Greek author Oppian wrote the Halieutica, a didactic poem about fishing. He described various means of fishing including the use of nets cast from boats, scoop nets held open by a hoop, and various traps "which work while their masters sleep." Here is Oppian's description of fishing with a "motionless" net:

The fishers set up very light nets of buoyant flax and wheel in a circle round about while they violently strike the surface of the sea with their oars and make a din with sweeping blow of poles. At the flashing of the swift oars and the noise the fish bound in terror and rush into the bosom of the net which stands at rest, thinking it to be a shelter: foolish fishes which, frightened by a noise, enter the gates of doom. Then the fishers on either side hasten with the ropes to draw the net ashore.

Pictorial evidence of Roman fishing comes from mosaics which show nets.[7] In a parody of fishing, a type of gladiator called retiarius was armed with a trident and a casting-net. He would fight against the murmillo, who carried a short sword and a helmet with the image of a fish on the front.