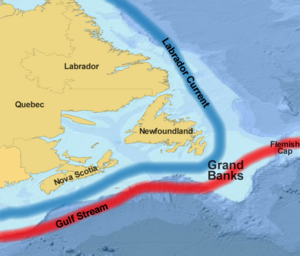 The Grand Banks is a large area of submerged highlands southeast of Newfoundland and east of the Laurentian Channel on the North American continental shelf. Covering 36,000 square miles (93,200 sq km), the Banks are relatively shallow, ranging from 80 to 330 feet (25 to 100 meters) in depth. It is in this area that the cold Labrador Current mixes with the warm waters of the Gulf Stream. The mixing of these waters and the shape of the ocean bottom lifts nutrients to the surface. These conditions created one of the richest fishing grounds in the world.

Extensive marine life flourishes in the Grand Banks, whose range extends beyond the exclusive economic zone (200 miles) and into international waters. This has made it an important part of both the Canadian and the high seas fisheries, with fishermen risking their lives in the extremely inhospitable environment consisting of rogue waves, fog, icebergs, sea ice, hurricanes, nor'easter winter storms and earthquakes.

The Grand Banks were the world's most important international fishing area in the nineteenth and early twentieth centuries. By the 1970s and 1980s the area began to suffer from overfishing. By 1992 a total moratorium was declared indefinitely for Northern Cod. Five to ten years previously codfish were being caught in record numbers and seemingly vanished overnight. The disappearance of cod caused it to be considered for endangered species protection. Canada was forced to close its Grand Banks fishery and thousands of fishermen and fishery workers were put out of work. The Grand Banks were reopened for fishing in the late 1990s, but operating on a severely reduced scale.

Economic catastrophe was suffered by northeastern Canada particularly Newfoundland. Due to the results of overfishing, governments worldwide, including the United Nations, were prompted to regulate protection of the environment while allowing for the utilization of its resources. 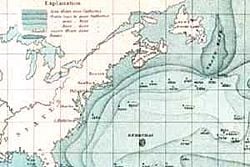 First attempt at a bathymetric map including the Grand Banks, by Matthew Fontaine Maury, 1855.

Extensive marine life flourishes in the Grand Banks both on or near the sea floor, as well as in the water column, due in part to its relative shallowness. Its extensive range provides important spawning, nursery and feeding areas to a large number of fish and shellfish species whose natural range extends beyond the exclusive economic zone and into international waters. This has made it an important part of both the Canadian and the high seas fisheries.

The area also supports large colonies of sea birds such as Northern Gannets, shearwaters and sea ducks and various sea mammals such as seals, dolphins and whales.

The meeting of the cold Labrador Current and the warm Gulf Stream in this vicinity causes heavy fogs. Coupled with hazardous icebergs and the nearby transatlantic shipping lanes, fishing in the Grand Banks is hazardous.

Semi-fictional depictions of fishermen working on the Grand Banks can be found in Sebastian Junger's novel The Perfect Storm (1997) and movie of the same name (2000) and in Rudyard Kipling's novel Captains Courageous (1897). 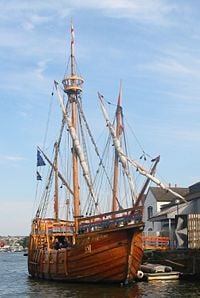 Replica of John Cabot's ship, the Matthew, in which he sailed from England to Newfoundland in 1497.

The Beothuk, the aboriginal inhabitants of the island of Newfoundland at the time of European contact in the fifteenth and sixteenth centuries, were not known to have fished the Grand Banks.

Did you know?
John Cabot's discovery of the abundance of fish in the Grand Banks in 1497 led to the development of fishing and fish processing, culminating in overfishing and a serious decline of fish stocks

While the area's "official" discovery is credited to John Cabot in 1497, English and Portuguese vessels are known to have sought out these waters prior to that, based upon information they received from earlier Viking voyages to Newfoundland. Several navigators, including Basque fishermen, are known to have fished these waters in the fifteenth century. Some texts from that era refer to a land called Bacalao, "the land of the codfish," which is possibly Newfoundland.

However, it was not until John Cabot noted the waters' abundance of sea life that the existence of these fishing grounds became widely known in Europe. Soon, fishermen and merchants from France, Spain, Portugal and England developed seasonal inshore fisheries producing for southern European markets.

Known as "dry" fishery, cod were split, salted, and dried on shore over the summer before crews returned to Europe. The French pioneered "wet" or "green" fishery on the Banks proper around 1550, heavily salting the cod on board and immediately returning home. Within twenty years, hundreds of vessels and thousands of men were active in the two types of fisheries on the island.

By the seventeenth century, French and English fishermen began to spend winters in Newfoundland. Though French residents were forced to leave the island in the 1700s, French migrant fishery continued on the northern part of the island. English-speaking Newfoundlanders had largely replaced English migrant fishers inshore by around 1815. Soon the Banks' fish stocks also became important for the early economies of eastern Canada and the United States. Schooners based in New England and Newfoundland began to make inroads on the European vessels' share of the catch. By the end of the century, European ships fishing the Grand Banks were largely French, while Brazil and the Caribbean also became major markets.

On November 18, 1929, a major earthquake (known as the 1929 Grand Banks earthquake) on the southwestern part of the Grand Banks bordering the Laurentian Channel caused an underwater landslide which resulted in extensive damage to transatlantic cables and generated a rare Atlantic tsunami that struck the south coast of Newfoundland and eastern Cape Breton Island, claiming 27 lives in the Burin Peninsula. 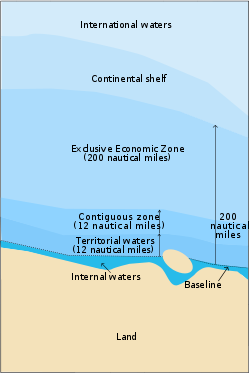 The Grand Banks were possibly the world's most important international fishing area in the nineteenth and twentieth centuries. Technological advances in fishing such as sonar and large factory ships, including the massive factory freezer trawlers introduced in the 1950s, led to overfishing and a serious decline in the fish stocks. Based upon the many foreign policy agreements Newfoundland had entered into prior to its admittance into the Canadian Confederation, foreign fleets—some from as far away as Russia—came to the Banks in force, even venturing inland, catching unprecedented quantities of fish.

The cod population began to dwindle after peaking in the 1960s. While climatic change was a factor, it is agreed that overfishing was the primary reason for its decline. By the 1970s the overfishing by industrial vessels in the waters of eastern Canada was evident. Between 1973–1982 the United Nations and its member states negotiated the Third Convention of the Law of the Sea—one component of which was the concept of nations being allowed to declare an Exclusive Economic Zone. Although not formally adopted into binding international law until 1982, the possibility of declaring an EEZ became a de-facto reality in 1977 with the conclusion of those sections of the Third Conference negotiations relating to maritime boundary and economic control.

But on the whole, the EEZ was very well received by fishermen in eastern Canada because it meant they could fish unhindered out to the limit without fear of competing with the foreign fleets. During the late 1970s and early 1980s, Canada's domestic offshore fleet grew as fishermen and fish processing companies rushed to take advantage. It was during this time when it was noticed that the foreign fleets now pushed out to 200 nautical miles (370 km) offshore and excluded from the rich Canadian waters, were increasing their harvest on the "nose" and "tail" of the Grand Banks—two areas of the continental shelf off Newfoundland which were outside the EEZ.

By the late 1980s the dwindling catches of Atlantic cod were being reported throughout Newfoundland and eastern Canada as the federal government and citizens of coastal regions in the area began to face the reality that the domestic and foreign overfishing had taken its toll. The Canadian government was finally forced to take drastic action in 1992 when a total moratorium was declared indefinitely for the Northern Cod.

The immediate impact was felt most in Newfoundland, followed by the Atlantic coast of Nova Scotia. The nascent Northwest Atlantic Fisheries Organization, organized after the 1977 EEZ declarations to coordinate conservation efforts in Canada, the United States, and member nations in Europe also declared a ban. By this time cod, which only five to ten years previously was being caught in record numbers, had vanished almost overnight to the point where it was considered for endangered species protection. The fishery-based economy of Newfoundland and Labrador fell into a severe crisis in the 1990s. The economic impact in coastal Newfoundland was unprecedented. To lessen the impact that its policies of permitting overfishing had exacted upon rural Newfoundlanders, the federal government swiftly created a relief program called "The Atlantic Groundfish Strategy" (TAGS) to provide short to medium term financial support, as well as employment retraining for the longer term. In 1992, thousands were put out of work when Canada was forced to close its Grand Banks fishery. It reopened in the late 1990s, operating on a severely reduced scale.

Canada's EEZ occupies the majority of the Grand Banks except for the lucrative "nose" (eastern extremity, near the Flemish Cap) and "tail" (southern extremity) of the fishing bank. The 1982 United Nations Convention on the Law of the Sea's maritime zone definition provides an exception to the rule of distance regarding limits of its continental shelf. As Canada's continental shelf extends beyond 200 nautical miles, the nation is requesting an extension which includes an additional 579,150 square miles (1.5 million sq km) on the Atlantic and Arctic coasts, including the Grand Banks. As required, Canada is performing the hydrographic and geological surveys necessary for claiming the entire continental shelf off eastern Canada. Once this aspect of UNCLOS is ratified, Canada will presumably control these remaining parts of Grand Banks which are outside of its EEZ jurisdiction.

Petroleum reserves have been discovered in the Grand Banks and a number of oil fields are under development in the region. In addition to the most notable, the Hibernia, are the Terra Nova and White Rose projects.

Oil exploration began in the 1960s and continued into the 1980s, despite the loss of the Ocean Ranger mobile offshore drilling unit (MODU) on February 15, 1982. The vast Hibernia oil field was discovered in 1979. Following several years of aborted startup attempts, the Hibernia megaproject began construction of the production platform and gravity base structure in the early 1990s.

As the Hibernia field was located in an extremely inhospitable environment consisting of rogue waves, fog, icebergs and sea ice, hurricanes, and nor'easter winter storms, engineering analysis determined that the most appropriate drilling platform would be in the form of a gravity base structure (GBS). The production platform Hibernia consists of a 37,000 t integrated topside facility mounted on a 600,000 t gravity base structure. The topside facilities accommodate drilling, producing, and utility equipment on the Hibernia platform, and provide living quarters for the steady-state crew of approximately 185 people.

Production commenced on November 17, 1997, with initial production rates in excess of 50,000 barrels of crude oil per day from a single well. The facilities have a design capacity of 230,000 barrels production per day, and in 2003, the then C-NOPB gave permission to increase annual production rate to 220,000 barrels per day. Hibernia has proven to be the most prolific oil well in Canada. However, earthquake and iceberg activity in the Banks pose potential ecological disaster.