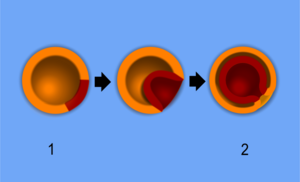 Gastrulation of a diploblast: The formation of germ layers from a (1) blastula to a (2) gastrula. Some of the ectoderm cells (orange) move inward forming the endoderm (red).

Germ layers are nearly universal in animals. All animals more complex than sponges produce two or three primary germ layers (primary tissue layers). Those that produce two germ layers (the ectoderm and endoderm), the cnidarians, are called diploblastic. Animals that produce a third layer between these two layers (appropriately called the mesoderm) are termed triploblastic.

The development of these primitive germ layers provides the foundation for the development of all the organs and tissues of organisms. The endoderm develops into such organs as the stomach, liver, lungs, and intestines, while the mesoderm forms structures such as the skeleton, spleen, heart, and blood (lymph cells, and ectoderm differentiates into the central nervous system, the lens of the eye, the epidermis, hair, and mammary glands.

Fertilization leads to the formation of a zygote. During the next stage, cleavage, mitotic cell divisions transform the zygote into a tiny ball of cells, a blastula. This early embryonic form undergoes gastrulation, forming a gastrula.

Other than sponges, animals develop two or three germ layers during gastrulation (development of the embryo from the blastula to a gastrula). A germ layer is a collection of cells formed during animal embryogenesis. Germ layers eventually give rise to all of an animal’s tissues and organs through the process of organogenesis.

All animals except sponges are placed in Eumetazoa, a clade characterized by organisms with true tissues organized into germ layers, and an embryo that goes through a gastrula stage. This germ layer gives rise to a specific structure in the organism, with the cells on the outside, known as the ectoderm, becoming the covering and those on the inside, known as the endoderm, becoming the gut lining (Towle 1989). Most animals form a third layer called a mesoderm, an embryonic layer that forms between the endoderm and ectoderm, and which gives rise to the muscles, skeleton, blood, blood vessels, and other interior body linings (Towle 1989).

All higher animals (from flatworms to man) are triploblastic, possessing a mesoderm in addition to the germ layers found in diploblasts. Triploblastic animals develop recognizable organs. Germ layers are particularly pronounced in the vertebrates. Organisms also can be divided in terms of whether or not there is a fluid-filled body cavity, known as a coelom, that separates the digestive tract and the outer body wall and that is completely enclosed by cells derived from mesoderm tissue in the embryo (Simmons 2004). All organisms more complex than a platyhelminthes have a coelom, whose lining is formed by the mesoderm. They are known as coelomates, and include mollusks, annelids, arthropods, echinoderms, and chordate. On the other hand, in pseudocoelomates, such as the roundworm, the mesoderm incompletely lines the body cavity, not expanding to form a lining of the organs but rather forming a pseudocoelom ("false-body cavity") (Towle 1989). Acoelomates, those without a coelom or pseudocoelom, include those with two germ layers not separated by a cavity (cnidarians) and those with three germ layers not separated by a coelom (flatworms).

The germ layers also are important to differentiate organisms known as protostomes and deuterostomes. In deuterostomes, the mesoderm forms when there is division of the cells at the top of the gastrula. In protostomes, the cells split at the junction of the endoderm and ectoderm during gastrulation and there is rapid division of cells (Towle 1989).

In humans, after about three days, the zygote forms a solid mass of cells by mitotic division, called a morula. This then changes to a blastocyst, consisting of an outer layer called a trophoblast, and an inner cell mass called the embryoblast. Filled with uterine fluid, the blastocyst breaks out of the zona pellucida and undergoes implantation. The inner cell mass initially has two layers: the hypoblast and epiblast. At the end of the second week, a primitive streak appears. The epiblast in this region moves towards the primitive streak, dives down into it, and forms a new layer, called the endoderm, pushing the hypoblast out of the way (this goes on to form the amnion.) The epiblast keeps moving and forms a second layer, the mesoderm. The top layer is now called the ectoderm.

The endoderm produces tissue within the lungs, thyroid, and pancreas.

The endoderm is one of the germ layers formed during animal embryogenesis. Cells migrating inward along the archenteron form the inner layer of the gastrula, which develops into the endoderm.

The endoderm consists at first of flattened cells, which subsequently become columnar. It forms the epithelial lining of the whole of the digestive tube excepting part of the mouth and pharynx and the terminal part of the rectum (which are lined by involutions of the ectoderm). It also forms the lining cells of all the glands that open into the digestive tube, including those of the liver and pancreas; the epithelium of the auditory tube and tympanic cavity; the trachea, bronchi, and air cells of the lungs; the urinary bladder and part of the urethra; and the follicle lining of the thyroid gland and thymus.

In summary, the endoderm forms the stomach, the colon, the liver, the pancreas, the urinary bladder, the lining of the urethra, the epithelial parts of trachea, the lungs, the pharynx, the thyroid, the parathyroid, and the intestines.

The mesoderm aids in the production of cardiac muscle, skeletal muscle, smooth muscle, tissues within the kidneys, and red blood cells.

The mesoderm germ layer forms in the embryos of triploblastic animals. During gastrulation, some of the cells migrating inward contribute to the mesoderm, an additional layer between the endoderm and the ectoderm.

This key innovation evolved hundreds of millions of years ago and led to the evolution of nearly all large, complex animals. The formation of a mesoderm led to the development of a coelom. Organs formed inside a coelom can freely move, grow, and develop independently of the body wall, while fluid cushions and protects them from shocks.

In summary, the mesoderm forms skeletal muscle, the skeleton, the dermis of skin, the crystal lens of the eye, connective tissue, the urogenital system, the heart, blood (lymph cells), and the spleen. 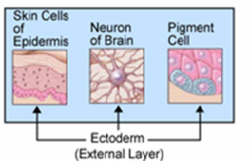 The ectoderm produces tissues within the epidermis, aids in the formation of neurons within the brain, and constructs melanocytes.

The ectoderm is the start of a tissue that covers the body surfaces. It emerges first and forms from the outermost of the germ layers.

The ectoderm forms the central nervous system, the lens of the eye, cranial and sensory, the ganglia and nerves, pigment cells, head connective tissues, the epidermis, hair, and mammary glands.

Because of its great importance, the neural crest is sometimes considered a fourth germ layer. It is, however, derived from the ectoderm.

Retrieved from https://www.newworldencyclopedia.org/p/index.php?title=Germ_layer&oldid=1057203
Categories:
Hidden category:
This page was last edited on 28 August 2021, at 18:03.
Content is available under Creative Commons Attribution/Share-Alike License; additional terms may apply. See Terms of Use for details.