Bronchitis is an inflammation of the mucous membranes of the bronchi, medium-sized and large airways in the lungs. Bronchitis results in restriction of air flow to the lungs.

There are two main types of bronchitis in humans: Acute and chronic. Acute bronchitis is of brief duration and is one of the more common illnesses impacting preschool and school-age children (Krapp and Wilson 2005). Chronic bronchitis involves a long course and may be a sign of serious, underlying lung disease that may be slowed, but not cured; it is a major cause of disability and disease (Longe 2005, 2006; Krapp and Wilson, 2005). 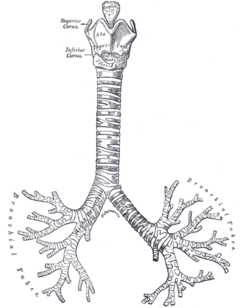 Front view of cartilages of larynx, trachea, and bronchi

Personal responsibility is key to prevention and treatment. The best preventative measure to not begin smoking or to immediately stop smoking, with other preventative steps including avoiding chemical and environmental irritants and maintaining good health (Longe 2006). Chronic bronchitis is by far most commonly caused by cigarette smoke. When acute or chronic bronchitis is diagnosed, a key treatment step for smokers is to stop smoking.

Acute bronchitis usually involves an infection, typically caused by viruses, such as influenza, the common cold viruses (rhinovirus and coronavirus), and so forth (Breslow 2002). However, it can also be caused by bacterial infection or there may be secondary bacterial infection (Longe 2006). Nonviral agents include Mycoplasma pneumniae, Chlamydia pneumoniae, and Brodetella pertussis (Breslow 2002). It can also be caused by inhalation of various foreign materials (toxic gases, products of combustion, etc.) (Breslow 2002). Acute bronchitis may last several days or weeks.

Acute bronchitis is most common among infants, young children, and the elderly (Longe 2006). Children under the age of five are more commonly diagnosed with bronchitis than any other age group (Krapp and Wilson 2005). Other at risk categories include smokers, people with lung or heart diseases, and individuals exposed to chemical fumes or high levels of air pollution (Longe 2006).

As with any inflammation of the upper airway, acute bronchitis can increase the likelihood of a person developing pneumonia.

Acute bronchitis is characterized by cough and sputum (phlegm) production and symptoms related to inflamed airways and the phlegm (causing obstruction), such as shortness of breath and wheezing. There may occasionally be chest pains, fever, and fatigue or malaise.

Usually, acute bronchitis begins with symptoms similar to a cold, such as a runny nose, sneezing, and a dry cough, but soon the cough becomes deep and painful (Longe 2006). The phlegm or sputum may be greenish or yellow, and fever may reach 38.8 degrees centigrade or 102 degrees Fahrenheit (Longe 2006).

Diagnosis of acute bronchitis is by clinical examination, including observing the patient's symptoms and health history, and sometimes microbiological examination of the phlegm.

A physical examination will often reveal decreased intensity of breath sounds, wheeze (rhonchi), and prolonged expiration. A stethoscope may be used to listen for sounds specific for lung inflammation, such as moist rales, crackling, and wheezing (Longe 2006). Most doctors rely on the presence of a persistent dry or wet cough as evidence of bronchitis.

A variety of tests may be performed in patients presenting with cough and shortness of breath:

A sputum sample may be collected by asking the patient to cough deeply and spit the material that comes up from the lungs or it can be collected by bronchoscopy, using a local anesthetic and passing a tube into the airways (Longe 2005). A sputum culture may be performed if the sputum is green or has blood in it to identify the disease-causing organism (Longe 2005).

Acute bronchitis needs to be distinguished from an attack of [[pneumonia] (where chest x-rays will reveal a shadow, or lung infiltrate lacking in acute bronchitis), bronchial asthma, and acute exacerbation of chronic obstructive pulmonary disease (COPD) (Longe 2005).

In the absence of a secondary infection, acute bronchitis may be treated the same as the treatment for a common cold, including rest and drinking plenty of fluids, and perhaps acetaminophen for fever and pain (Longe 2005). Cough suppressants are employed only when the cough is dry and without production of sputum (Longe 2005). When phlegm is being coughed up, it should be allowed to continue to bring up the extra mucus and irritants from the lungs, thus reducing the plugging of airways by the accumulating mucus and also reducing a breeding ground for bacteria (Longe 2005). Expectorant cough medicines can be used to thin the mucus, making it easier to cough up (Longe 2005).

Treatment may be with antibiotics (if a bacterial infection is suspected), bronchodilators (to relieve breathlessness), and other treatments.

If antibiotics are used, a meta-analysis found that "amoxicillin/clavulanic acid, macrolides, second-generation or third-generation cephalosporins, and quinolones" may be more effective (Dimopoulos 2007).

Alternative treatments focus on prevention by emphasizing a healthy diet to strengthen the immune system and practicing stress management (Longe 2005). Various herbal medicines may be used to treat bronchitis, such as inhaling eucalyptus or other essential oils in warm steam (Longe 2005).

Overall, acute bronchitis usually lasts approximately 20 to 30 days. It may accompany or closely follow a cold or the flu, or may occur on its own. Bronchitis usually begins with a dry cough, including waking the sufferer at night. After a few days, it progresses to a wetter or productive cough, which may be accompanied by fever, fatigue, and headache. If the acute bronchitis is uncomplicated, the fever, fatigue, malaise, and other symptoms, except the cough, may last only a few days (Longe 2005). The wet cough may last up to several weeks.

Should the cough last longer than a month, some doctors may issue a referral to an otolaryngologist (ear, nose, and throat doctor) to see if a condition other than bronchitis is causing the irritation. It is possible that having irritated bronchial tubes for as long as a few months may inspire asthmatic conditions in some patients.

In addition, if one starts coughing mucus tinged with blood, one should see a doctor. In rare cases, doctors may conduct tests to see if the cause is a serious condition such as tuberculosis or lung cancer.

Chronic bronchitis involves chronic or recurrent excess bronchial mucus secretion (Breslow 2002). It is defined clinically as a persistent cough that produces sputum (phlegm), for at least three months in two consecutive years. It is found almost exclusively in adult smokers (Krapp and Wilson 2005). The death, morbidity, and economic impact of this condition is immense, as is emphysema (Breslow 2002).

Chronic bronchitis is not generally caused by infection; the most common cause is inhalation of respiratory tract irritants, with the most common irritant being cigarette smoke (Longe 2006). Other irritants include air pollution and chemical fumes, as well as mold, dust, and other environmental irritants (Longe 2006).

Chronic bronchitis develops slowly over time, with the irritants paralyzing or snapping off the cilia of the cells that line the respiratory tract and normally move the mucus along (Longe 2006). The airways become clogged, inflamed, and narrowed, and this leads to difficulty breathing (Longe 2006).

Patients with chronic, obstructive bronchitis typically have a daily cough, shortness of breath, sputum production, and sometimes wheezing (Breslow 2002). Chronic respiratory failure may occur in advanced cases (Breslow 2002). There may be acute exacerbations one or two times a year when there are episodes of increased cough with shortness of breath, discolored sputum, and wheezing.

Mucosal hypersecretion is promoted by a substance released by neutrophils. Further obstruction to the airways is caused by more goblet cells in the small airways. This is typical of chronic bronchitis.

Although infection is not the reason or cause of chronic bronchitis it is seen to aid in sustaining the bronchitis.

In diagnosing chronic bronchitis, a key method is the pulmonary function test, which used a spirometer to measure the volume of air entering the lungs and leaving (Longe 2006). A physician may do further examinations using a chest x-ray, electrocardiogram, and blood tests (Longe 2006).

There is no cure for chronic bronchitis, although the progression may be slowed and an initial improvement in symptoms may be achieved (Longe 2006). Treatment is complex, and medical management usually involves such measures as lifestyle changes, such as quitting smoking and avoiding polluted air and secondhand smoke, improved nutrition, exercise, and immunization against infection by influenza virus and Streptococcus pneumoniae (Breslow 2002; Longe 2006). Treatment with bronchodilator drugs (such as albuterol) are used to relax the muscles of the bronchial tubes and allowed increased air flow (Breslow 2002; Longe 2006). Other strategies include providing supplemental oxygen and anti-inflammatory medications.