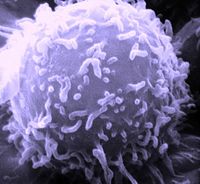 A lymphocyte is a type of white blood cell (leukocyte) in the vertebrate immune system.

Lymphocytes play an important and integral role in the body's defenses, and are part of a system of extraordinary complexity and coordination. While offering protection against millions of possible invaders, including viruses, bacteria, are cancer cells, lymphocytes allow normal body cells and helpful, symbiotic bacteria to flourish at the same time. All of this reflects a stunning intricacy and harmony.

B cells respond to pathogens by producing large quantities of antibodies that then neutralize foreign objects like bacteria and viruses. In response to pathogens, some T cells, called "helper T cells," produce cytokines that direct the immune response while other T cells, called "cytotoxic T cells," produce toxic granules that induce the death of pathogen infected cells. Following activation, B cells and T cells leave a lasting legacy of the antigens they have encountered in the form of memory cells. Throughout the lifetime of an animal, these memory cells will “remember” each specific pathogen encountered, and are able to mount a strong response if the pathogen is detected again.

In addition, lymphocyte-like cells called natural killer (NK) cells are involved in the immune system, albeit part of the innate immune system. They play a major role in defending the host from both tumors and virally infected cells. NK cells distinguish infected cells and tumors from normal and uninfected cells by recognizing alterations in levels of a surface molecule called MHC (major histocompatibility complex) class I. NK cells are activated in response to proteins called interferons. Activated NK cells release cytotoxic (cell-killing) granules, which then destroy the altered cells (Janeway et al. 2001). They were named "natural killer" because of the initial notion that they do not require prior activation in order to kill cells which are missing MHC class I.

Overview: Lymphocytes and the immune system

The basis of specific immunity lies in the capacity of immune cells to distinguish between proteins produced by the body's own cells ("self" antigen—those of the original organism), and proteins produced by invaders or cells under control of a virus ("non-self" antigen—or what is not recognized as the original organism). This distinction is made via T-Cell Receptors (TCR) or B-Cell Receptors (BCR). 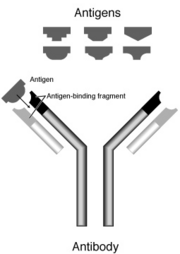 Schematic of antibody binding to an antigen

The humoral immune system acts against bacteria and viruses in the body liquids (e.g., blood) by means of proteins called immunoglobulins (also known as antibodies), which are produced by B cells. Secreted antibodies bind to antigens on the surfaces of invading microbes (such as viruses or bacteria), which flags them for destruction. An antigen is any substance that causes the immune system to produce antibodies. The human body has the ability to form millions of different types of B cells each day, and each type has a unique receptor protein (referred to as the B cell receptor, or BCR) on its membrane that will bind to one particular antigen. An antibody is a large, Y-shaped protein used to identify and neutralize foreign objects.

The cell-mediated immune system, the second main mechanism of the adaptive immune system, destroys virus-infected cells (among other duties) with T cells. Cell-mediated immunity is an immune response that does not involve antibodies, but rather involves the activation of macrophages and natural killer cells, the production of antigen-specific cytotoxic T lymphocytes, and the release of various cytokines in response to an antigen. Cell-mediated immunity is directed primarily at microbes that survive in phagocytes and microbes that infect non-phagocytic cells. It is most effective in removing virus-infected cells, but also participates in defending against fungi, protozoans, cancers, and intracellular bacteria. It also plays a major role in transplant rejection. 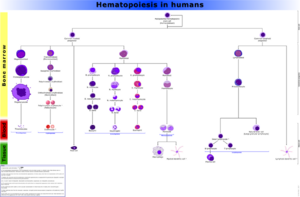 Mammalian stem cells differentiate into several kinds of blood cells within the bone marrow (Abbas and Lichtman 2003). This process is called hematopoiesis. All lymphocytes originate, during this process, from a common lymphoid progenitor before differentiating into their distinct lymphocyte types. The formation of lymphocytes is known as lymphopoiesis.

B cells remain in the bone marrow to mature, while T cells migrate to and mature in a distinct organ called the thymus. Following maturation, the lymphocytes enter the circulation and peripheral lymphoid organs (e.g the spleen and lymph nodes) where they survey for invading pathogens and/or tumor cells.

The lymphocytes involved in adaptive immunity (that is, B and T cells) differentiate further after exposure to an antigen; they form effector and memory lymphocytes. Effector lymphocytes function to eliminate the antigen, either by releasing antibodies (in the case of B cells), cytotoxic granules (cytotoxic T cells), or by signaling to other cells of the immune system (helper T cells). Memory cells remain in the peripheral tissues and circulation for an extended time ready to respond to the same antigen upon future exposure. 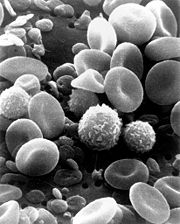 Microscopically, in a Wright's stained peripheral blood smear, a normal lymphocyte has a large, dark-staining nucleus with little to no basophilic cytoplasm. In normal situations, the coarse, dense nucleus of a lymphocyte is approximately the size of a red blood cell (about 7 micrometres in diameter) (Abbas and Lichtman 2003). Some lymphocytes show a clear perinuclear zone (or halo) around the nucleus or could exhibit a small clear zone to one side of the nucleus. Polyribosomes are a prominent feature in the lymphocytes and can be viewed with an electron microscope (Abbas and Lichtman 2003). The ribosomes are involved in protein synthesis, allowing the generation of large quantities of cytokines and immunoglobulins by these cells.

It is impossible to distinguish between T cells and B cells in a peripheral blood smear (Abbas and Lichtman 2003). Normally, flow cytometry testing is used for specific lymphocyte population counts. This can be used to specifically determine the percentage of lymphocytes that contain a particular combination of specific cell surface proteins, such as immunoglobulins or cluster of differentiation (CD) markers or that produce particular proteins (for example, cytokines). In order to study the function of a lymphocyte by virtue of the proteins it generates, other scientific techniques like the ELISPOT or secretion assay techniques can be used (Janeway et al. 2001).

A decrease in lymphocytes occurs when the human immunodeficiency virus (HIV) hijacks and destroys T cells (specifically, the CD4+ subgroup of T lymphocytes). Without the key defense that these T cells provide, the body becomes susceptible to opportunistic infections that otherwise would not affect healthy people. The extent of HIV progression is typically determined by measuring the percentage of CD4+ T cells in the patient's blood. The effects of other viruses or lymphocyte disorders can also often be estimated by counting the numbers of lymphocytes present in the blood.