Oxytocin (ŏk'sĭ-tō'sĭn) is a relatively small polypeptide hormone in mammals that plays an important role in birth and ejection of milk from the female breast. It also acts as a neurotransmitter in the brain. Along with the antidiuretic hormone vassopressin, oxytocin is one of the two major hormones released from the posterior lobe of the pituitary gland (Blakemore and Jennett 2001).

Ocytocin, which means "quick birth" in Greek, is released in large amounts in females after distension of the cervix and vagina during labor, stimulating smooth muscle contractions of the uterus and facilitating childbirth. It also is released after stimulation of the nipples, inducing muscular contractions around the alveoli and milk ducts in the breasts, facilitating breastfeeding.

Oxytocin involves harmonious interaction between neural and hormonal systems. It is produced in nerve cells rather than in glandular cells (where most hormones are made) and it is released into the blood following sensory nerve stimulation of the nerve cells (Blakemore and Jennett 2001). For example, the suckling, sight, and sound of an infant, among other stimuli associated with breastfeeding, stimulate communication with hypothalamic nerve cells (where the hormone is produced). This leads to secretion of the hormone from the pituitary gland, where the ending of the nerves lie and the hormone is packaged in vesicles (Blakemore and Jennett 2001). The action of oxytocin occurs relatively rapidly because sensory nerve impulses are involved.

Ocytocin is a hormone, meaning it is a chemical messenger secreted by cells (including tissues and organs) in one part of a multicellular organism to travel to and coordinate the activities of different cells, providing a value to the whole organism. An enormous range of chemicals are used for this type of cell-to-cell communication, including peptides (chains of amino acids) and steroids (a type of fat-soluble organic compound). Oxytocin is a peptide hormone.

Oxytocin has the chemical formula C43H66N12O12S2. It is a relatively short polypeptide, being composed of only nine amino acids (a nonapeptide). The sequence is cysteine - tyrosine - isoleucine - glutamine - asparagine - cysteine - proline - leucine - glycine (CYIQNCPLG). The cysteine residues form a sulfur bridge. Oxytocin has a molecular mass of 1007 daltons. One international unit (IU) of oxytocin is the equivalent of about two micrograms of pure peptide.

The structure of oxytocin is very similar to that of vasopressin, an antidiuretic hormone that is also a nonapeptide: cysteine - tyrosine - phenylalanine - glutamine - asparagine - cysteine - proline - arginine - glycine). Vassopressin, whose residues also form a sulfur bridge, has a sequence that differs from oxytocin by two amino acids.

Oxytocin and vasopressin are the only known hormones released by the human posterior pituitary gland to act at a distance. However, oxytocin neurons make other peptides, including corticotropin-releasing hormone (CRH) and dynorphin, for example, that act locally. The magnocellular neurons that make oxytocin are adjacent to magnocellular neurons that make vasopressin, and are similar in many respects.

Oxytocin was the first hormone for which the structure was identified and which was synthesized in the laboratory (Blakemore and Jennett 2001). Oxytocin and vasopressin were isolated and synthesized by Vincent du Vigneaud in 1953, work for which he received the Nobel Prize in Chemistry in 1955.

Oxytocin is made in magnocellular neurosecretory cells in the supraoptic nucleus and paraventricular nucleus of the hypothalamus and is released into the blood from the posterior lobe of the pituitary gland.

The posterior pituitary essentially contains the endings of nerves whose cell bodies lie in the hypothalamus (Blakemore and Jennett 2001). The hormone is manufactured in the cell bodies in the hypothalamus in the form of a larger, precursor molecule. It is then transported down the nerve fibers to the posterior lobe, where the active hormone is cleaved from the precursor molecule and then is secreted directly into the blood capillaries from the nerve endings of the posterior pituitary (Blakemore and Jennett 2001). 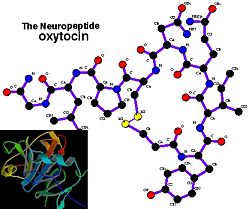 In the pituitary gland, oxytocin is packaged in large, dense-core vesicles, where it is bound to neurophysin I; neurophysin is a large peptide fragment of the giant precursor protein molecule from which oxytocin is derived by enzymatic cleavage.

Secretion of oxytocin from the neurosecretory nerve endings is regulated by the electrical activity of the oxytocin cells in the hypothalamus. These cells generate action potentials that propagate down axons to the nerve endings in the pituitary; the endings contain large numbers of oxytocin-containing vesicles, which are released by exocytosis when the nerve terminals are depolarized.

Oxytocin also is made by some neurons in the paraventricular nucleus that project to other parts of the brain and to the spinal cord.

Virtually all vertebrates have an oxytocin-like nonapeptide hormone that supports reproductive functions and a vasopressin-like nonapeptide hormone involved in water regulation. The two genes are always located close to each other (less than 15,000 bases apart) on the same chromosome and are transcribed in opposite directions. It is thought that the two genes resulted from a gene duplication event; the ancestral gene is estimated to be about 500 million years old and is found in cyclostomes (modern members of the Agnatha) (Gimpl and Fahrenholz 2001).

The peripheral actions of oxytocin mainly reflect secretion from the pituitary gland.

Actions of oxytocin within the brain

Oxytocin secreted from the pituitary gland cannot re-enter the brain because of the blood-brain barrier. Instead, the behavioral effects of oxytocin are thought to reflect release from centrally projecting oxytocin neurons, different from those that project to the pituitary gland. Oxytocin receptors are expressed by neurons in many parts of the brain and spinal cord, including the amygdala, ventromedial hypothalamus, septum, and brainstem.

Synthetic oxytocin is sold as medication under the trade names Pitocin and Syntocinon and also as generic Oxytocin. Oxytocin is destroyed in the gastrointestinal tract, and therefore must be administered by injection or as nasal spray. Oxytocin has a half-life of typically about three minutes in the blood. Oxytocin given intravenously does not enter the brain in significant quantities—it is excluded from the brain by the blood-brain barrier. Drugs administered by nasal spray are thought to have better access to the central nervous system. Oxytocin nasal sprays have been used to stimulate breastfeeding.

Injected oxytocin analogues are used to induce labor and support labor in case of non-progression of parturition. It has largely replaced ergotamine as the principal agent to increase uterine tone in acute postpartum haemorrhage. Oxytocin also is used in veterinary medicine to facilitate birth and to increase milk production. The tocolytic agent atosiban (Tractocile®) acts as an antagonist of oxytocin receptors; this drug is registered in many countries to suppress premature labor between 24 and 33 weeks of gestation. It has fewer side effects than drugs previously used for this purpose (ritodrine, salbutamol, and terbutaline).

Some have suggested that the trust-inducing property of oxytocin might help those who suffer from social anxieties, while others have noted the potential for abuse by swindlers given the trust associated with oxytocin usage.

Oxytocin is relatively safe when used at recommended doses. Potential side effects include:

Retrieved from https://www.newworldencyclopedia.org/p/index.php?title=Oxytocin&oldid=986848
Categories:
Hidden category:
This page was last edited on 10 March 2015, at 15:02.
Content is available under Creative Commons Attribution/Share-Alike License; additional terms may apply. See Terms of Use for details.