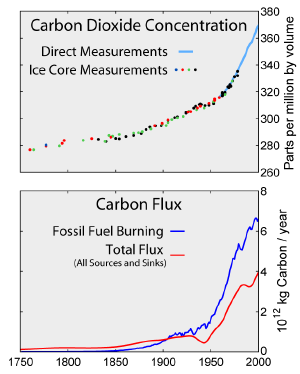 Top: Increasing atmospheric CO2 levels as measured in the atmosphere and ice cores. Bottom: The amount of net carbon increase in the atmosphere, compared to carbon emissions from burning fossil fuel.

Greenhouse gases (GHGs) is the name given to a number of gases present in the earth's atmosphere which reduce the loss of heat into space and therefore contribute to global temperatures through the greenhouse effect. These gases are essential to maintaining the temperature of the Earth and without them the planet would be so cold as to be uninhabitable.

The most important greenhouse gas is water vapor which creates clouds. The vast bulk of this is produced by the natural process of evaporation of water from the sea. An excess of greenhouse gases can raise the temperature of a planet to lethal levels, as on Venus where the 90 bar partial pressure of carbon dioxide (CO2) contributes to a surface temperature of about 467 °C (872 °F). Carbon dioxide is produced by many natural and industrial processes, which currently result in CO2 levels of 380 ppmv in the atmosphere. The reason for such a low level of carbon dioxide is that CO2 is quickly taken up by plants through photosynthesis and converted into carbohydrates.

Based on ice-core samples and records (see graphs) current levels of CO2 are approximately 100 ppmv higher than during immediately pre-industrial times, when direct human influence was negligible. 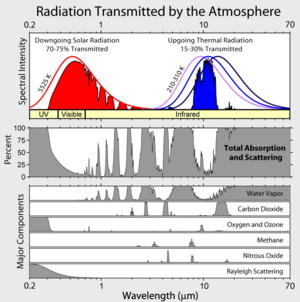 "Greenhouse gases" are essential to maintaining the temperature of the Earth—without them the planet would be so cold as to be uninhabitable.[1][2]

Did you know?
Without "greenhouse gases" the Earth would be so cold as to be uninhabitable

On earth, the most abundant greenhouse gases are, in order of relative abundance:

The most important greenhouse gases are:

Note that this is a combination of the strength of the greenhouse effect of the gas and its abundance. For example, methane is a much stronger greenhouse gas than CO2, but present in much smaller concentrations.

It is not possible to state that a certain gas causes a certain percentage of the greenhouse effect, because the influences of the various gases are not additive. (The higher ends of the ranges quoted are for the gas alone; the lower ends, for the gas counting overlaps.)[3] Other greenhouse gases include, but are not limited to, nitrous oxide, sulfur hexafluoride, hydrofluorocarbons, perfluorocarbons and chlorofluorocarbons (see IPCC list of greenhouse gases). A significant greenhouse gas not yet addressed by the IPCC (or the Kyoto Protocol) is nitrogen trifluoride.[4]

The major atmospheric constituents (nitrogen, N2 and oxygen, O2) are not greenhouse gases. This is because homonuclear diatomic molecules such as N2 and O2 neither absorb nor emit infrared radiation, as there is no net change in the dipole moment of these molecules when they vibrate. Molecular vibrations occur at energies that are of the same magnitude as the energy of the photons on infrared light. Heteronuclear diatomics such as CO or HCl absorb IR; however, these molecules are short-lived in the atmosphere owing to their reactivity and solubility. As a consequence they do not contribute significantly to the greenhouse effect.

Late nineteenth-century scientists experimentally discovered that N2 and O2 did not absorb infrared radiation (called, at that time, "dark radiation") and that CO2 and many other gases did absorb such radiation. It was recognized in the early twentieth century that the known major greenhouse gases in the atmosphere caused the earth's temperature to be higher than it would have been without the greenhouse gases. 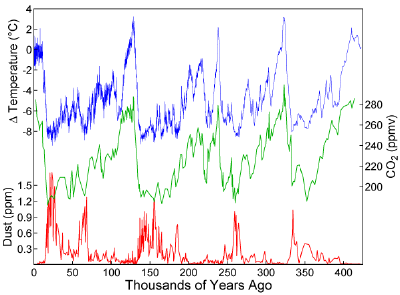 Earlier still, a 200-million year period of intermittent, widespread glaciation extending close to the equator (Snowball Earth) appears to have been ended suddenly, about 550 million years ago, by a colossal volcanic outgassing which raised the CO2 concentration of the atmosphere abruptly to 12 percent, about 350 times modern levels, causing extreme greenhouse conditions and carbonate deposition as limestone at the rate of about 1mm per day.[8] This episode marked the close of the Precambrian eon, and was succeeded by the generally warmer conditions of the Phanerozoic, during which multicellular animal and plant life evolved. No volcanic carbon dioxide emission of comparable scale has occurred since. In the modern era, emissions to the atmosphere from volcanoes are only about 1 percent of emissions from human sources.[8] 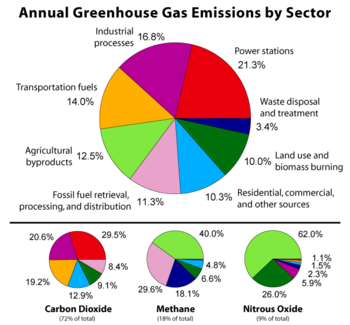 Global anthropogenic greenhouse gas emissions broken down into 8 different sectors for the year 2000. 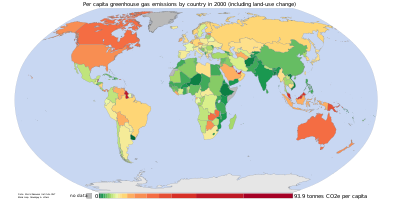 Per capita anthropogenic greenhouse gas emissions by country for the year 2000 including land-use change.

Since about 1750, human activity has increased the concentration of carbon dioxide and of some other important greenhouse gases. Natural sources of carbon dioxide are more than 20 times greater than sources due to human activity, but over periods longer than a few years natural sources are closely balanced by natural sinks such as weathering of continental rocks and photosynthesis of carbon compounds by plants and marine plankton. As a result of this balance, the atmospheric concentration of carbon dioxide remained between 260 and 280 parts per million for the 10,000 years between the end of the last glacial maximum and the start of the industrial era.[9]

Some of the main sources of greenhouse gases due to human activity include:

The seven sources of CO2 from fossil fuel combustion are (with percentage contributions for 2000–2004):[11]

Carbon dioxide, methane, nitrous oxide and three groups of fluorinated gases (sulfur hexafluoride, HFCs, and PFCs) are the major greenhouse gases and the subject of the Kyoto Protocol, which came into force in 2005.[13] 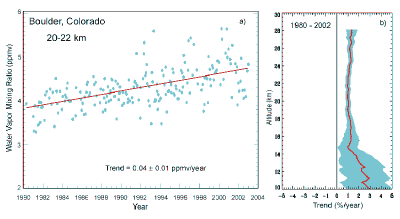 Measurements from Antarctic ice cores show that just before industrial emissions started, atmospheric CO2 levels were about 280 parts per million by volume (ppm; the units µL/L are occasionally used and are identical to parts per million by volume). From the same ice cores it appears that CO2 concentrations stayed between 260 and 280 ppm during the preceding 10,000 years. However, because of the way air is trapped in ice and the time period represented in each ice sample analyzed, these figures are long term averages not annual levels. Studies using evidence from stomata of fossilized leaves suggest greater variability, with CO2 levels above 300 ppm during the period 7,000–10,000 years ago,[15] though others have argued that these findings more likely reflect calibration/contamination problems rather than actual CO2 variability.[16] 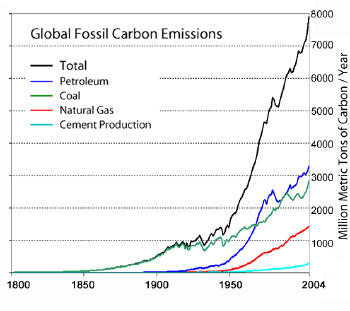 Recent rates of change and emission 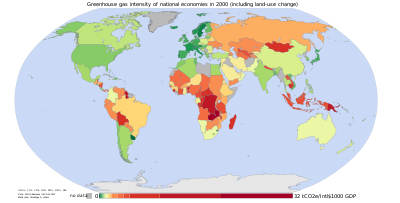 The sharp acceleration in CO2 emissions since 2000 of >3% y−1 (>2 ppm y−1) from 1.1% y−1 during the 1990s is attributable to the lapse of formerly declining trends in carbon intensity of both developing and developed nations. Although over 3/4 of cumulative anthropogenic CO2 is still attributable to the developed world, China was responsible for most of global growth in emissions during this period. Localized plummeting emissions associated with the collapse of the Soviet Union have been followed by slow emissions growth in this region due to more efficient energy use, made necessary by the increasing proportion of it that is exported.[11] In comparison, methane has not increased appreciably, and N2O by 0.25% y−1.

Atmospheric levels of CO2 have set another new peak, partly a sign of the industrial rise of Asian economies led by China. China is expected to continue to increase its carbon dioxide emissions, largely because of the rapid construction of old-fashioned power plants in poorer internal provinces. 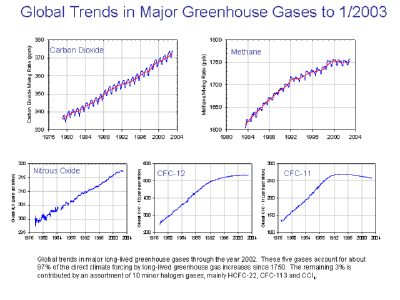 According to a preliminary estimate by the Netherlands Environmental Assessment Agency, the largest national producer of CO2 emissions since 2006 has been China with an estimated annual production of about 6200 megatonnes. China is followed by the United States with about 5,800 megatonnes. However the per capita emission figures of China are still about one quarter of those of the US population.

Relative to 2005, China's fossil CO2 emissions increased in 2006 by 8.7 percent, while in the USA, comparable CO2 emissions decreased in 2006 by 1.4 percent. The agency notes that its estimates do not include some CO2 sources of uncertain magnitude.[18] These figures rely on national CO2 data that do not include aviation. Although these tonnages are small compared to the CO2 in the Earth's atmosphere, they are significantly larger than pre-industrial levels. 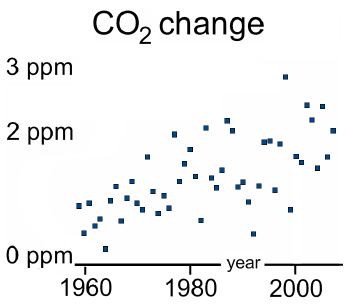 Atmospheric carbon dioxide concentration is increasing at an increasing rate. In the 1960s, the average annual increase was only 37 percent of what it was in 2000 through 2007.[19]

Removal from the atmosphere and global warming potential

Aside from water vapor, which has a residence time of days, it is believed that most greenhouse gases take many years to leave the atmosphere.

Greenhouse gases can be removed from the atmosphere by various processes: 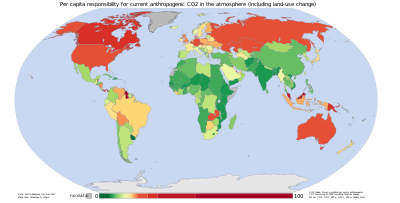 of an atmospheric species X in a one-box model as the average time that a molecule of X remains in the box. Mathematically

can be defined as the ratio of the mass

(in kg) of X in the box to its removal rate, which is the sum of the flow of X out of the box (

The atmospheric lifetime of a species therefore measures the time required to restore equilibrium following an increase in its concentration in the atmosphere. Individual atoms or molecules may be lost or deposited to sinks such as the soil, the oceans and other waters, or vegetation and other biological systems, reducing the excess to background concentrations. The average time taken to achieve this is the mean lifetime. The atmospheric lifetime of CO2 is often incorrectly stated to be only a few years because that is the average time for any CO2 molecule to stay in the atmosphere before being removed by mixing into the ocean, photosynthesis, or other processes. However, this ignores the balancing fluxes of CO2 into the atmosphere from the other reservoirs. It is the net concentration changes of the various greenhouse gases by all sources and sinks that determines atmospheric lifetime, not just the removal processes.

Examples of the atmospheric lifetime and GWP for several greenhouse gases include:

The use of CFC-12 (except some essential uses) has been phased out due to its ozone depleting properties[22]. The phasing-out of less active HCFC-compounds will be completed in 2030.

The global warming potential (GWP) depends on both the efficiency of the molecule as a greenhouse gas and its atmospheric lifetime. GWP is measured relative to the same mass of CO2 and evaluated for a specific timescale. Thus, if a molecule has a high GWP on a short time scale (say 20 years) but has only a short lifetime, it will have a large GWP on a 20 year scale but a small one on a 100 year scale. Conversely, if a molecule has a longer atmospheric lifetime than CO2 its GWP will increase with time. 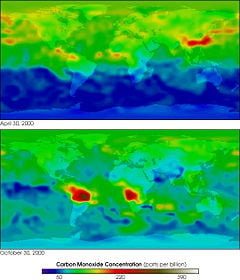 Carbon monoxide has an indirect radiative effect by elevating concentrations of methane and tropospheric ozone through scavenging of atmospheric constituents (e.g., the hydroxyl radical, OH) that would otherwise destroy them. Carbon monoxide is created when carbon-containing fuels are burned incompletely. Through natural processes in the atmosphere, it is eventually oxidized to carbon dioxide. Carbon monoxide has an atmospheric lifetime of only a few months[24] and as a consequence is spatially more variable than longer-lived gases.

Another potentially important indirect effect comes from methane, which in addition to its direct radiative impact also contributes to ozone formation. Shindell et al. (2005)[25] argue that the contribution to climate change from methane is at least double previous estimates as a result of this effect.[26]