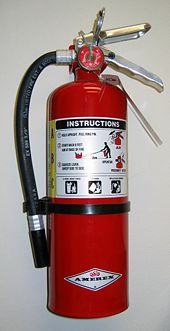 Fire extinguishers have been a major part of fire prevention. The first, primitive fire extinguishers were most likely created shortly after fire was discovered. They come in a wide variety of sizes and shapes. Their greatest benefit is the convenience and the safety that they provide.

The typical steps for operating a fire extinguisher (described by the acronym "PASS") are the following:

There are various types of extinguishers, which are used for different types of fires; using the wrong type can worsen the fire hazard, but using the right one can create a better situation. However, fire extinguishers are not a substitute for trained fire-fighting professionals with state-of-the-art equipment. They are, rather, a supplement to be used as a prevention measure—but once the fire is out of control, the safest recourse is to quickly leave the hazard area and call the fire department.

The modern fire extinguisher was invented by British Captain George William Manby in 1818; it consisted of a copper vessel with 3 gallons (13.6 liters) of pearl ash (potassium carbonate) solution contained within compressed air.

The soda-acid extinguisher was invented in the nineteenth century, which was comprised of a cylinder with 1 or 2 gal of water with sodium bicarbonate mixed into it. A vial was suspended in the cylinder containing concentrated sulphuric acid. Depending on the type of extinguisher, the vial of acid could be broken in one of two ways. One way used a plunger to break the acid vial, while the second released a lead bung that held the vial closed. Once the acid was mixed with the bicarbonate solution, carbon dioxide gas was expelled and thereby pressurized the water. The pressurized water was forced from the canister through a nozzle or short length of hose.

Around 1912, Pyrene invented the carbon tetrachloride, or CTC, extinguisher, which expelled the liquid from a brass or chrome container by a handpump; it was usually of 1 imperial quart (1.1 L) or 1 imperial pint (0.6 L) capacity, but was also available in up to 2 imperial gallon (9 L) sizes. The CTC vaporized and extinguished the flames by chemical reaction. The extinguisher was suitable for liquid and electrical fires, and was popular in motor vehicles for the next 60 years. However, the vapor and combustion by-products were highly toxic, and could cause death in confined spaces.

Internationally there are several accepted classification methods for hand-held fire extinguishers. Each classification is useful in fighting fires with a particular group of fuel.

In Australia, yellow (Halon) fire extinguishers are illegal to own or use on a fire, unless an essential use exemption has been granted.[1]

Fire extinguishers are typically fitted in buildings at an easily accessible location, such as against a wall in a high-traffic area. They are also often fitted to motor vehicles, watercraft, and aircraft—this is required by law in many jurisdictions for identified classes of vehicles. Under NFPA 10, all commercial vehicles must carry at least one fire extinguisher (size/UL rating depending on type of vehicle and cargo, ie. fuel tankers typically must have a 20lb. when most others can carry a 5lb.). 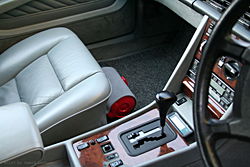 A fire extinguisher fitted to the passenger seat of a car.

Varying classes of competition vehicles require fire extinguishing systems, the simplest requirements being a 1A10B.C.E. hand-held portable extinguisher mounted to the interior of the vehicle. 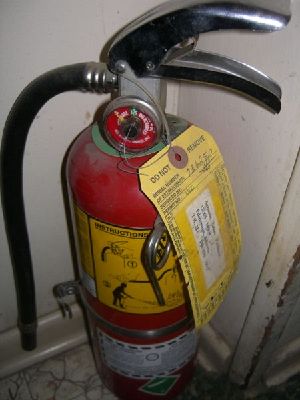 An empty fire extinguisher which was not replaced for years.

Most countries in the world require regular fire extinguisher maintenance by a competent person to operate safely and effectively, as part of fire safety legislation. Lack of maintenance can lead to an extinguisher not discharging when required, or rupturing when pressurized. Deaths have occurred, even in recent times, from corroded extinguishers exploding.

There is no all-encompassing fire code in the United States. Generally, most municipalities (by adoption of the International Fire Code) require inspections every 30 days to ensure the unit is pressurized and unobstructed (done by an employee of the facility) and an annual inspection by a qualified technician. Hydrostatic pressure testing for all types of extinguishers is also required, generally every five years for water and CO2 models up to every 12 years for dry chemical models.

Recently, the National Fire Protection Association and ICC voted to allow for the elimination of the 30 day inspection requirement so long as the fire extinguisher is monitored electronically. According to NFPA, the system must provide record keeping in the form of an electronic event log at the control panel. The system must also constantly monitor an extinguisher’s physical presence, internal pressure, and whether an obstruction exists that could prevent ready access. In the event that any of the above conditions are found, the system must send an alert to officials so they can immediately rectify the situation. Electronic monitoring can be wired or wireless.

In the UK, three types of maintenance are required:

Retrieved from https://www.newworldencyclopedia.org/p/index.php?title=Fire_extinguisher&oldid=1074119
Categories:
Hidden category:
This page was last edited on 27 July 2022, at 07:06.
Content is available under Creative Commons Attribution/Share-Alike License; additional terms may apply. See Terms of Use for details.