The Science Museum (London) is one of many major science museums in the world and is a part of the National Museum of Science and Industry. England played a key role for the developments of sciences and technologies in the modern world. It exhibits James Watt's steam engine, Galileo Galilei 's telescope, the first locomotive, Alexander Graham Bell's telephone and other historical innovations that contributed to the Industrial Revolution.

The Museum not only holds remarkable historical collections but also provides opportunities for visitors to have hands on experience for items appropriate to their age groups. The Museum has well integrated the past and the future of sciences and technologies, which explains the continuity of scientific history. The Museum also supplies various resources for educators by sending curators to schools to make scientific presentations. Visitors feel the spirit of innovation from the way the Museum provides services and exhibitions. The Museum is one of the best tourist attractions in London and it certainly appeals the value of England for her contributions to the development of human history.

In 1857 under Bennet Woodcroft from the collection of the Royal Society of Arts and surplus items from the Great Exhibition, a museum was born. Initially part of the South Kensington Museum, together with what is now the Victoria and Albert Museum, it then became separated and became the Museum of Patents in 1858, the Patent Office Museum in 1863. This museum contained many of the most famous exhibits of what is now the Science Museum. In 1885, the Science Collections were renamed the Science Museum and in 1893 a separate Director was appointed.[1] The Art Collections were renamed the Art Museum, which became the Victoria and Albert Museum nearby. The Patent Office Museum was merged into the Science Museum in 1909. 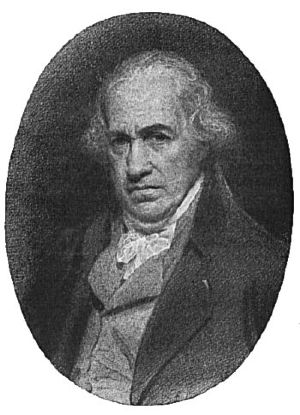 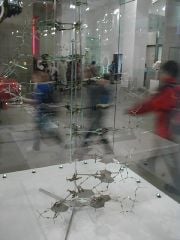 DNA reconstruction model built by Crick and Watson in 1953.

The Science Museum now holds a collection of over 300,000 items, including such famous items as James Watt's steam engine, Galileo Galilei 's telescope, Alexander Graham Bell's telephone, Stephenson's Rocket, Puffing Billy (the oldest surviving steam locomotive), the first jet engine, a reconstruction of Francis Crick and James Watson's model of DNA, some of the earliest remaining steam engines, a working example of Charles Babbage's Difference engine, the first prototype of the 10,000-year Clock of the Long Now, and documentation of the first typewriter. It also contains hundreds of interactive exhibits. A recent addition is the IMAX 3D Cinema showing science and nature documentaries, some of them in 3-D, and the Wellcome Wing which focuses on digital technology.[2] Entrance has been free since December 1, 2001.

The museum houses some of the many objects collected by Henry Wellcome around a medical theme. On the fourth floor, an exhibit called "Glimpses of Medical History" exhibits reconstructions and dioramas of the history of practiced medicine. The fifth floor gallery called "Science and the Art of Medicine," holds medical instruments and practices from ancient days and from many countries. The collection is strong in clinical medicine, biosciences and public health. The museum is a member of the London Museums of Health & Medicine.

The Science Museum has a dedicated library, and until the 1960s was Britain's National Library for Science, Medicine and Technology. It holds runs of periodicals, early books and manuscripts, and is used by scholars world-wide. It has for a number of years been run in conjunction with the Library of Imperial College, but in 2004 the Museum was unable to bear its share of the cost, so options are being discussed for the library's break-up and dispersal.

The Science Museum's medical collections have a global scope and coverage probably not bettered in the world. Strengths include Clinical Medicine, Biosciences and Public Health. The new Wellcome Wing, with its focus on Bioscience, makes the Museum the world's leading centre for the presentation of contemporary science to the public.

In November 2003, the Science Museum opened the Dana Centre. The Centre is an urban bar and café annexed to the Museum.

In October 2007, The Science Museum cancelled a talk by the co-discoverer of the structure of DNA, James D. Watson, because he claimed that IQ test results showed blacks to have lower intelligence than whites. The decision was criticized by some scientists as well as supported by other scientists, including Steven Rose.[3]

The Science Museum also organizes "Science Night": "An all night extravaganza with a scientific twist." Up to 380 children aged between eight and 11, accompanied by adults, are invited to spend an evening performing fun "science based" activities and then spend the night sleeping in the galleries museum amongst the exhibits. In the morning, they're woken to breakfast and more science, watching an IMAX film before the end of the event. 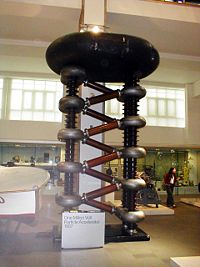 An early particle accelerator, built in 1937 by Philips of Eindhoven.

The East Hall is the first area that most visitors see as they enter the building, stretching up through three floors. The ground floor area is mostly filled with iconic steam engines of various sorts, which together tells the story of the British industrial revolution. Suspended from the ceiling is a giant metallic ring, the inside of which is covered in white LEDs which form patterns and display messages typed into kiosks by visitors in the Energy gallery. Also in the East Hall is a Waterstone's bookshop, selling only books related to popular science and mathematics in accordance with the museum, and the Revolution café.

Exploring Space is a historical gallery, filled with rockets and exhibits that tell the story of human space exploration and the benefits that space exploration has brought us (particularly in the world of telecommunications).

Making the Modern World is a relatively new gallery, in which some of the museum's most iconic objects, including Stephenson's Rocket and an Apollo space capsule, are imaginatively displayed along a timeline chronicling man's technological achievements.

Flight is another longstanding gallery, up towards the western end of the third floor. Contained in the gallery is a number of full sized aeroplanes and helicopters, including Spitfire and Hurricane fighters, as well as numerous aero-engines and a cross-section of a Boeing 747.

One of the most popular galleries in the museum is the interactive Launchpad gallery. Redesigned and reopened in November 2007, the new look gallery houses over 50 interactive exhibits illustrating many different concepts in physical science. The gallery is staffed by Explainers who are available to demonstrate how exhibits work, conduct live experiments and perform shows to schools and the visiting public.

In 2008, The Science of Survival exhibition opened to the public and allowed visitors to explore what the world might be like in 2050 and how mankind will meet the challenges of climate change and energy shortages.

The Science Museum provides educational resources: educational materials for teachers; online information for pre-visit and post-visit studies; experiential exhibits for different age groups. With these educational resource supports, teachers can easily integrate museum visit to their science education at school. The Museum additionally provides services to send a team of curators and to perform interesting scientific experiments that can be performed in a classroom.

Visitors can experience innovative spirit both in their exhibitions and science education.

Retrieved from https://www.newworldencyclopedia.org/p/index.php?title=Science_Museum_(London)&oldid=1097841
Categories:
This page was last edited on 25 January 2023, at 17:23.
Content is available under Creative Commons Attribution/Share-Alike License; additional terms may apply. See Terms of Use for details.