Space exploration is the physical exploration of outer space, by both human spaceflights and robotic spacecraft. Although the observation of objects in space (that is, astronomy) predates reliable recorded history, space exploration became a practical possibility only after the development of large, liquid-fueled rocket engines during the early twentieth century. Common rationales for exploring space include advancing scientific research, uniting different nations, and ensuring the future survival of humanity.

Space exploration has often been used as a proxy competition for geopolitical rivalries, particularly the Cold War. The early era of space exploration was driven by a space race between the Soviet Union and the United States. The launch of the first human-made object to orbit the Earth, the USSR's Sputnik 1, on October 4, 1957, and the first Moon landing by the American Apollo 11 craft on July 20, 1969, are often taken as the boundaries for this initial period. After the first 20 years of exploration, focus shifted from one-off flights to renewable hardware, such as the Space Shuttle program, and from competition to cooperation, as with the International Space Station. From the 1990s onward, private interests began promoting space tourism. Larger government programs have advocated manned missions to the Moon and possibly Mars sometime after 2010.

Space exploration programs have received various criticisms, on cost or safety grounds, but there are many advocates as well, and public opinion in many countries is usually supportive of these programs. In any case, space missions have resulted in a variety of important discoveries, including the effects of low gravity on humans, the presence of Van Allen belts around the Earth, images of the far side of the Moon, and the absence of intelligent life on Mars. Current discussions revolve around the possibility of space colonization—that is, the establishment of human settlements on extraterrestrial objects. 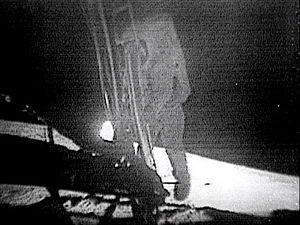 Still frame from July 20, 1969 video transmission of Neil Armstrong stepping onto the surface of the Moon. This was the first human step onto an extraterrestrial object. 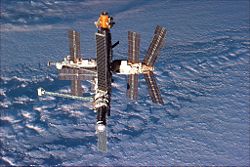 First permanently manned space station, Mir, which orbited the Earth from 1986 until 2001. 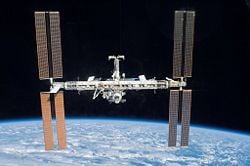 The first successful orbital launch was of the Soviet unmanned Sputnik 1 (Satellite I) mission on October 4, 1957. The satellite weighed about 83 kg (184 pounds), and is believed to have orbited Earth at a height of about 250 km (150 miles). It had two radio transmitters (20 and 40 MHz), which emitted "beeps" that could be heard by any radio around the globe. Analysis of the radio signals was used to gather information about the electron density of the ionosphere, while temperature and pressure data was encoded in the duration of radio beeps. The results indicated that the satellite was not punctured by a meteoroid. Sputnik 1 was launched by an R-7 rocket. It incinerated upon re-entry on January 3, 1958.

This success led to an escalation of the American space program, which unsuccessfully attempted to launch Vanguard 1 into orbit two months later. On January 31, 1958, the U.S. successfully orbited Explorer 1 on a Juno rocket. In the meantime, the Soviet dog Laika became the first animal in orbit on November 3, 1957.

The first human spaceflight was Vostok 1 (Sunrise 1) , carrying 27 year old cosmonaut Yuri Gagarin on April 12, 1961. The spacecraft completed one orbit around the globe, lasting about 1 hour and 48 minutes. Gagarin's flight was a demonstration of the advanced Soviet space program, and it opened an entirely new era in space exploration: Manned space flights.

The U.S. launched its first man into space within a month of Gagarin's flight, with the first Mercury flight by Alan Shepard. Orbital flight was achieved by the United States when John Glenn's Mercury-Atlas 6 orbited the Earth on February 20, 1962.

Valentina Tereshkova, the first woman in space, orbited the Earth 48 times aboard Vostok 6 on June 16, 1963.

China launched its first taikonaut into space 42 years later, with the flight of Colonel Yang Liwei aboard the Shenzhou 5 (Spaceboat 5) spacecraft.

Some early pioneers of space exploration

The dream of stepping into the outer reaches of the Earth's atmosphere was driven by rocket technology. The German V2 was the first rocket to travel into space, overcoming the problems of thrust and material failure. During the final days of World War II, this technology was obtained by both the Americans and Soviets as were its designers. The initial driving force for further development of the technology was a weapons race for inter-continental ballistic missiles (ICBMs) to be used as long-range carriers for fast nuclear weapon delivery. In 1961, when the USSR launched the first man into space, the U.S. declared itself to be in a "Space Race" with Russia.

The earliest discoveries included the fact that humans could survive in zero gravity. Once the Russians had progressed to flights that were longer than a few hours, space adaptation syndrome appeared; where the sickness and disorientation due to the removal of gravity caused physical symptoms.

In space stations, the effects of zero gravity on bones and skeletal muscles has become more evident, where the human body becomes progressively more optimized for zero-gravity to the extent that return to the Earth becomes problematic and humans become progressively more adapted to the weightless environment.

Americans were the first to discover the existence of the Van Allen belts around the Earth. These belts contain radiation trapped by the Earth's magnetic fields, which currently prevent habitable space stations from being placed above 1,000 km.

Russians were the first to take pictures of the far side of the moon, which had never been visible to humans. It was discovered that the far side was somewhat different, more heavily cratered.

U.S. Apollo missions returned rocks from the Moon, supporting the theory that the Moon was once part of the Earth.

Contrary to fanciful early reports from astronomers viewing Mars, no canals, and certainly no advanced lifeforms are present on the surface of that planet, but the presence of microscopic organisms has not been ruled out.

Space colonization, also called space settlement or space humanization, implies the permanent, autonomous (self-sufficient) human habitation of locations beyond Earth, especially on natural satellites such as the Moon or planets such as Mars. It would rely on significant amounts of In-Situ Resource Utilization.

During the 1990s, however, aerospace engineer Robert Zubrin developed the "Mars Direct" plan, emphasizing the utilization of Martian resources. In his widely acclaimed book Mars Direct, Zubrin explained how human beings could be sent to Mars within 10 years, using existing or foreseeable technologies, at a cost of between 20-30 billion dollars.

Other efforts have included the Ansari X Prize, which offered a 10 million dollar prize to any private, non-government organization that could develop a spacecraft capable of launching three human beings into space, returning them safely to Earth, and repeating the feat within 2 weeks. The X-prize was a resounding success with the launch of Space Ship One, which was developed from scratch for only 25 million dollars, a tiny fraction of the cost of a single space shuttle launch. This development was accompanied by other prize incentives, and plans for routine space tourist flights.

Although only the United States, Soviet Union/Russian, and Chinese space programs have launched humans into orbit, a number of other countries have space agencies that design and launch satellites, conduct space research and coordinate national astronaut programs.

Did you know?
The first human being in space was Russian cosmonaut Yuri Gagarin in 1961 and the first person to set foot on the moon was American astronaut Neil Armstrong in 1969

Critics of space exploration usually point out the costs, limitations, and risks of human spaceflight. It is more expensive to perform certain tasks in space by humans rather than by robots or other machines. People need large spacecraft that contain provisions such as a hermetic and temperature-controlled cabin, production of breathable air, food and drink storage, waste disposal, communications systems, and safety features such as crew escape systems and medical facilities. There is also the question of the security of the spacecraft as whole; losing a robot is nowhere near as tragic as human loss, so overall safety of non-human missions is not as much of an issue.

Some, including the late physicist and Nobel prize winner Richard Feynman, have contended that space missions have not achieved any major scientific breakthroughs. However, others have argued that, besides the large (and otherwise unavailable) amount of planetary data returned by spacecraft, there have been many indirect scientific achievements, including development of the modern computer, lasers, and so forth.

The results of research carried out by space exploration agencies, such as NASA, is one of the reasons supporters justify government expenses. Some even claim that space exploration is a necessity to humankind and that staying in its home planet will lead humanity to oblivion. Some of the reasons are lack of natural resources, comets, nuclear war, and worldwide epidemic. Stephen Hawking, renowned British theoretical physicist, said that "I don't think the human race will survive the next thousand years, unless we spread into space. There are too many accidents that can befall life on a single planet. But I'm an optimist. We will reach out to the stars."[1]

Some critics contend that in light of the huge distances in space, human space travel will involve no more than visiting earth's closest neighbors in the Solar System, barring any actualization of the theoretical concept of faster-than-light travel. Even such limited travel would consume large amounts of money and require complex spacecraft accommodating only a handful of people. Supporters of human space travel state that this is irrelevant, because its real value lies in providing a focal point for national prestige, patriotism, and international cooperation. They suggest the Clinton administration's close cooperation with Russia on the International Space Station (ISS) gave Russia something to take pride in, becoming a stabilizing factor in post-communist Russia. From this point of view, the ISS was a justifiable cash outlay.

Some people also have moral objections to the huge costs of space travel, and say that even a fraction of the space travel budget would make a huge difference in fighting disease and hunger in the world. However, compared to much more costly endeavors, like military actions, space exploration itself receives a very small percentage of total government spending (nearly always under 0.5 percent), and space-exploration advocates frequently point out that long-term benefits could outweigh short-term costs. In addition, the successful launches of Space Ship One, a privately constructed, reusable space plane developed for only $25 million, has diminished the impact of cost-based criticisms.

Overall, the public remains largely supportive of both manned and unmanned space exploration. According to an Associated Press Poll conducted in July 2003, 71 percent of U.S. citizens agreed with the statement that the space program is "a good investment," compared to 21 percent who did not.[2] NASA has produced a series of Public Service Announcement videos supporting the concept of space exploration.[3]

This is not to say that space exploration advocates do not criticize existing programs. Some supporters of space explorations, such as Robert Zubrin, have criticized on-orbit assembly of spacecraft as unnecessary and expensive, and argue for a direct approach for human exploration, such as Mars Direct.

Retrieved from https://www.newworldencyclopedia.org/p/index.php?title=Space_exploration&oldid=1028917
Categories:
Hidden category:
This page was last edited on 13 December 2019, at 02:30.
Content is available under Creative Commons Attribution/Share-Alike License; additional terms may apply. See Terms of Use for details.