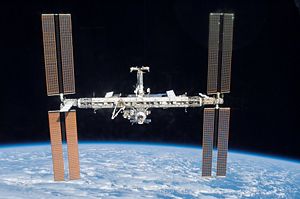 The International Space Station in 2007.

A space station is an artificial structure designed for humans to live in outer space. It is distinguished from other manned spacecraft by its lack of major propulsion or landing capabilities—instead, other vehicles are used to transport crew and cargo to and from the station.

So far, only low earth orbit (LEO) stations, also known as orbital stations, have been implemented. These structures have allowed astronauts to live in space for periods of weeks or months, occasionally exceeding a year. The only space station currently in use is the International Space Station, a joint project of several nations.

Space stations have been used for both military and civilian purposes. The last military-use space station was Salyut 5, which was used by the Almaz program of the Soviet Union in 1976 and 1977.

One of the goals of space stations is to study the effects of long-term space flight on the human body. In addition, they provide platforms for larger numbers and longer durations of scientific studies than available on other space vehicles. Since the ill-fated flight of Soyuz 11 to Salyut 1, all manned spaceflight duration records have been set aboard space stations. The duration record of 437.7 days was set by Valeriy Polyakov aboard Mir, from 1994 to 1995. As of 2006, three astronauts have completed single missions of over a year, all aboard Mir.

Broadly speaking, the space stations launched thus far have been of two types; the earlier stations, Salyut and Skylab, have been "monolithic," intended to be constructed and launched in one piece, and then manned by a crew later. As such, they generally contained all their supplies and experimental equipment when launched, and were considered "expended," and then abandoned, when these were used up.

Starting with Salyut 6 and Salyut 7, this trend changed; these were built with two docking ports, which allowed a second crew to visit, bringing a new spacecraft (for technical reasons, a Soyuz capsule cannot spend more than a few months in orbit, even powered down, safely) with them. This allowed for a crew to man the station continually. The presence of a second port also allowed Progress supply vehicles to be docked to the station, meaning that fresh supplies could be brought to aid long-duration missions. This concept was expanded on Salyut 7, which "hard docked" with a TKS tug shortly before it was abandoned; this served as a proof-of-concept for the use of modular space stations. The later Salyuts may reasonably be seen as a transition between the two groups.

The second group, consisting of Mir and the ISS, have been modular; a core unit was launched, and additional modules, generally with a specific role, were later added to that. On Mir they were usually launched independently, whereas on the ISS, most are brought aboard NASA's shuttle. This method allows for greater flexibility in operation, as well as removing the need for a single, immensely powerful launch vehicle. These stations are also designed from the outset to have their supplies provided by logistical support, which allows for a longer lifetime at the cost of requiring regular support launches.

These stations have various issues that limit their long-term habitability, such as very low recycling rates, relatively high radiation levels, and a lack of gravity. Some of these problems cause discomfort and long-term health effects. In the case of solar flares, all current habitats are protected by the Earth's magnetic field, and are below the Van Allen belts.

Future space habitats may attempt to address these issues, and are intended for long-term occupation. Some designs might even accommodate large numbers of people, essentially "cities in space," which people would make their homes. No such design has yet been constructed, because even for a small station, the extra equipment is too expensive to place in orbit.

Possible ways to deal with these costs would be building large numbers of rockets (economies of scale), reusable rockets, In Situ Resource Utilization, or the hypothetical construction of space elevators.

Past and present space stations

(The dates refer to periods when the stations were inhabited by crews.)

Following the controlled deorbiting of Mir in 2001, the International Space Station became the only space station currently in orbit; it has been continuously manned since October 30, 2000. As of September 9, 2006, it was 44.5 meters (146 ft) in length along the core between the Destiny and Zvezda modules or 52 meters (171 ft) long when a Progress is attached, and has a mass of 183.3 metric tons (202.1 short tons).

Crew and visitors counting is non-distinct. 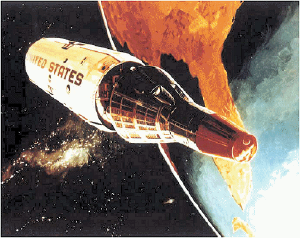 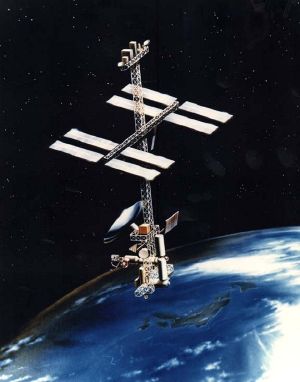 Retrieved from https://www.newworldencyclopedia.org/p/index.php?title=Space_station&oldid=1082273
Categories:
Hidden category:
This page was last edited on 14 October 2022, at 17:12.
Content is available under Creative Commons Attribution/Share-Alike License; additional terms may apply. See Terms of Use for details.