The National Air and Space Museum (NASM) of the Smithsonian Institution is a museum in Washington, D.C., United States, and is the most popular of the Smithsonian museums. It maintains the largest collection of aircraft and spacecraft in the world. It is also a vital center for research in the fields of the history, science, and technology of aviation and spaceflight, as well as planetary science and terrestrial geology and geophysics. Almost all space and aircraft on display are originals or backup crafts to the originals.

The Museum's collections display marvelous technological achievements that impress all visitors. The glory of aviation and space technology, however, is often overshadowed by its ties to the tragic human history of war. Although the Museum focuses on the scientific and technological value of its collections, aviation technology cannot be easily dissociated from the social, political realities of human history. In 1994, for example, the Museum planned to exhibit the Enola Gay, the B-29 bomber which dropped atomic bomb on Hiroshima City, Japan. The technological success of this "experimental" bomb was accompanied with one hundred forty thousand instantaneous civilian casualties (Modern warfare, as a political measure, targets combatants and avoids indiscriminate killings of non-combatants. Because the atomic bomb and terrorists are outside of the modern concept of warfare, they raise questions regarding the ethics of war.) and painful lasting side effects incurred on the survivors. The controversy that erupted led to the resignation of the Museum director. The incident demonstrates how technology cannot be separated from the moral values that guide the development and responsible use of technology for the benefit of humanity.

Originally called the National Air Museum when it was formed on August 12, 1946, by an act of Congress,[1] some pieces in the National Air and Space Museum collection date back to the 1876 Centennial Exposition in Philadelphia, after which the Chinese Imperial Commission donated a group of kites to the Smithsonian. The Stringfellow steam engine intended for aircraft was accessioned into the collection in 1889, the first piece actively acquired by the Smithsonian now in the current NASM collection.

After the establishment of the museum, there was no one building that could hold all the items to be displayed. Some pieces were on display in the Arts and Industries Building, some were stored in a shed in the Smithsonian's South Yard that came to be known as the "Air and Space Building," and the larger missiles and rockets were displayed outdoors in "Rocket Row."

The combination of the large numbers of aircraft donated to the Smithsonian after World War II and the need for hangar and factory space for the Korean War drove the Smithsonian to look for its own facility to store and restore aircraft. The current Garber Facility was ceded to the Smithsonian by the Maryland-National Capital Park and Planning Commission in 1952, after the curator Paul E. Garber spotted the wooded area from the air. Bulldozers from Fort Belvoir and prefabricated buildings from the United States Navy kept the initial costs low.

The space race in the 1950s and 1960s led to the renaming of the Museum to the "National Air and Space Museum," and finally congressional passage of appropriations for the construction of the new exhibition hall, which opened July 1, 1976, at the height of the United States Bicentennial festivities.

The Steven F. Udvar-Hazy Center opened in 2003, funded by a private donation.

Carl W. Mitman was the first head of the museum, under the title of Assistant to the Secretary for the National Air Museum, heading the museum from 1946 until his retirement from the Smithsonian in 1952.[2]

As of July 2008, the National Air and Space Museum is staffed by about two hundred sixty employees and about five hundred volunteers.

The National Air and Space Museum is widely considered one of Washington's most significant works of modern architecture. Because of the museum site's close proximity to the United States Capitol, the Smithsonian Institution wanted a building that would be architecturally impressive but would not stand out too boldly against the Capitol Building. St. Louis-based architect Gyo Obata of Hellmuth, Obata and Kassabaum accepted the challenge and designed the museum as four simple travertine-encased cubes containing the smaller and more theatrical exhibits, connected by three spacious steel-and-glass atriums which house the larger exhibits such as missiles, airplanes, and spacecraft. The museum, built by Gilbane Building Company, was finished in 1976. The west glass wall of the building is used for the installation of airplanes, functioning as a giant door.

The National Air and Space Museum has impressive collections of the original aircrafts, spacecrafts, and items that illustrate the development of aviation history. Each collection is a remarkable footstep and technological achievement of human history. The museum's commitment of preservation, research, and education to the public is reflected in its mission statement.

The National Air and Space Museum shall commemorate the national development of aviation and spaceflight, and will educate and inspire the nation by: 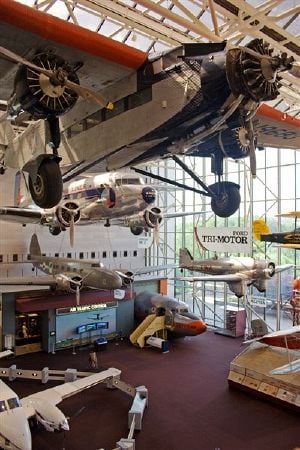 A variety of aircraft displayed at the National Air and Space Museum. Most notable: Ford Trimotor and Douglas DC-3 (top and second from top)

The central atrium of the NASM is the "Milestones of Flight" exhibit. Some of the most important artifacts of the aerospace history of the United States hang there, or sit on the floor of the atrium.

Hanging from the rafters

On the atrium floor

The National Air and Space Museum has 50,000 artifacts and thousands of additional artifacts come at different parts of the year. 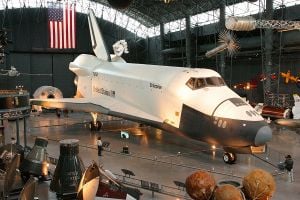 Space Shuttle Enterprise on display at the Udvar-Hazy Center.

The museum has a larger annex, the Steven F. Udvar-Hazy Center, located near Dulles Airport, which opened on December 15, 2003. Its plans call for a collection of 900 aircraft[4] with 135 spacecraft on display. The center was made possible by a US$ 65 million gift in October 1999 to the Smithsonian Institution by Steven F. Udvar-Hazy, an immigrant from Hungary and co-founder of the International Lease Finance Corporation.[4] Construction of the Center required fifteen years of preparation.[5]

The museum's total collection numbers over 30,000 aviation-related and 9,000 space-related artifacts, and is thus larger than will fit in the main hall. Many of the aircraft are at the Paul E. Garber Preservation, Restoration, and Storage Facility, also sometimes referred to as the "Silver Hill facility," in Suitland-Silver Hill, Maryland. The facility was acquired by the Smithsonian Institution in 1952, as a storage location for the growing collection of aircraft. It is named for Paul E. Garber, former curator of the collection, and it consists of 32 buildings.

The facility once was open for touring, but all exhibition items are being moved to the museum annex.

The Museum's archives are divided between the main exhibition building on the Mall and the Garber facility in Suitland. The collections include personal and professional papers, corporate records, and other collections assembled by topic.

The Museum includes the Center for Earth and Planetary Studies (CEPS), which conducts geological and geophysical research related to all the planets in the solar system. CEPS participates in programs that involve remote-sensing satellites and unmanned probes.

The museum also has a research library, at the site of the main museum building.

The collections, which include warplanes and military devices, often impress visitors for their technological achievements, but at the same time they raise ethical and moral questions. Controversy erupted in 1994, over a proposed exhibit commemorating the atomic bombing of Japan on its 50th anniversary. The centerpiece of the exhibit was the Enola Gay, the B-29 bomber that dropped the A-bomb on the Japanese city of Hiroshima. Veterans’ groups, backed by some Congressmen, argued strongly that the exhibit’s inclusion of Japanese accounts and photographs of victims insulted airmen.[6] Also disputed was the predicted number of fatal U.S. casualties that would have resulted from an invasion of Japan, had that been necessary. In the end, the museum’s director, Martin O. Harwit, was led to resignation.

Throughout the museum's displays, the Air and Space Museum presents all thrust levels for rocket and jet engines in mass units (kilograms or pounds) rather than force units (newtons or pounds-force). This usage is at odds with common scientific/engineering practice presented in NASA SP 7012.

Retrieved from https://www.newworldencyclopedia.org/p/index.php?title=National_Air_and_Space_Museum&oldid=1086912
Categories:
Hidden category:
This page was last edited on 11 November 2022, at 01:35.
Content is available under Creative Commons Attribution/Share-Alike License; additional terms may apply. See Terms of Use for details.