The Japanese city of Hiroshima (広島市, Hiroshima-shi) is the capital of Hiroshima Prefecture, and the largest city in the Chūgoku region of western Honshū, the largest of Japan's islands. Hiroshima was founded on the coast of the Seto Inland Sea in 1589 by Mori Terumoto (毛利 輝元), who was replaced by Masanori Fukushima (福島正則) after Tokugawa Ieyasu won the Battle of Sekigahara in 1600. Hiroshima castle passed to Asano Nagaakira (浅野長晟) in 1619, and descendants of Asano ruled Hiroshima until the Meiji Restoration in 1868. Hiroshima gained the status of a municipality on April 1, 1889 and was officially designated a city on April 1, 1980 by government ordinance. During the Meiji period Hiroshima became an important port and military center.

Hiroshima is known throughout the world as the first city in history subjected to nuclear warfare when the United States dropped an atomic bomb on the morning of August 6, 1945. Between 90,000 and 140,000 people lost their lives. Hiroshima was proclaimed a City of Peace by the Japanese parliament in 1949, and has become a center for international conferences on peace as well as social issues. The city government continues to advocate the abolition of all nuclear weapons. Visitors come from all over the world to meditate at the Hiroshima Peace Memorial Park, opened in 1955 at the epicenter of the atomic blast. The Genbaku Dome (原爆ドーム) or "Atomic Bomb Dome" in the Hiroshima Peace Memorial Park was designated a World Heritage site in 1996.

Hiroshima is the capital of Hiroshima prefecture and the largest city in the Chūgoku region of southwestern Honshū, the largest of Japan's islands. Hiroshima, whose name means “Broad Island,” is situated on the delta of the Ota River, whose six channels divide it into several islets. The city is located on Hiroshima Bay of the Inland Sea.

Hiroshima was founded on the coast of the Seto Inland Sea in 1589 by Mori Terumoto (毛利 輝元), who made it his capital after leaving Koriyama Castle in Aki Province (安芸国).[5] Terumoto quickly constructed Hiroshima Castle and occupied it in 1593. After Mori was on the losing side at the Battle of Sekigahara (1600), the winner, Tokugawa Ieyasu, deprived him of most of his fiefs including Hiroshima, and gave Aki province to Fukushima Masanori (福島正則), a daimyo who had supported him.[6] The castle passed to Asano Nagaakira( 浅野長晟) in 1619, and Asano was appointed the daimyo of the area. Under Asano’s rule, the city prospered, developed, and expanded, with few military conflicts or disturbances.[6] Asano's descendants continued to rule until the Meiji Restoration in the 19th century.[3]

Hiroshima served as the capital of Hiroshima Domain during the Edo period. After the han was abolished in 1871, the city became the capital of Hiroshima prefecture. During the Meiji period Hiroshima became a major urban center as the Japanese economy shifted from primarily rural to urban industries. Ujina Harbor was constructed in the 1880s, allowing Hiroshima to become an important port city. The Sanyo Railroad was extended to Hiroshima in 1894, and a rail line from the main station to the harbor was constructed for military transportation during the First Sino-Japanese War.[6] New industrial plants, including cotton mills, were established in Hiroshima in the late 1800s.[7] Further industrialization in Hiroshima was stimulated during the Russo-Japanese War in 1904, which required development and production of military supplies. The Hiroshima Prefectural Commercial Exhibition Hall was constructed in 1915 as a center for trade and exhibition of new products. Its name was later changed to Hiroshima Prefectural Product Exhibition Hall, and again to Hiroshima Prefectural Industrial Promotion Hall.[8] 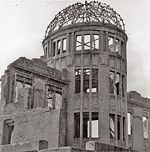 Atomic Bomb Dome the Hiroshima Peace Memorial, a remnant of the city near ground zero of its nuclear bombardment. 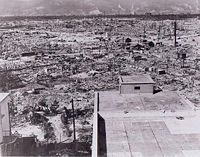 During World War II, the Second Army and Chugoku Regional Army were headquartered in Hiroshima, and the Army Marine Headquarters was located at Ujina port. The city also had large depots of military supplies, and was a key center for shipping.[9]

The bombing of Tokyo and other cities in Japan during World War II caused widespread destruction and over 200,000 deaths, nearly all civilians. There were numerous such air raids on Hiroshima. To protect against incendiary bombs in Hiroshima, students were mobilized to demolish houses and create firebreaks.[10]

On Monday[11], August 6, 1945, the nuclear weapon Little Boy was dropped on Hiroshima by the crew of the American B-29 bomber Enola Gay, directly killing an estimated 80,000 people. By the end of the year, injury and radiation sickness brought the total number of casualties to 90,000-140,000.[12] Approximately 69 percent of the city's buildings were completely destroyed, and 6.6 percent severely damaged.

Research on the effects of the attack was restricted under Allied occupation, and information was censored until the signing of the San Francisco Peace Treaty in 1951, restoring control to the Japanese.[13] 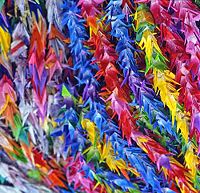 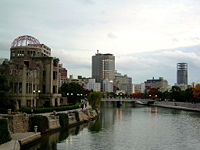 On September 17, 1945, Hiroshima was struck by the Makurazaki Typhoon (Typhoon Ida), one of the largest typhoons of the Shōwa period. Hiroshima prefecture suffered more than three thousand deaths and injuries, about half the national total.[14] More than half the bridges in the city were destroyed, along with heavy damage to roads and railroads, further devastating the city.[15]

Hiroshima was rebuilt after the war, with the help from the national government through the Hiroshima Peace Memorial City Construction Law passed in 1949. It provided financial assistance for reconstruction, along with donated land that had previously been owned by the national government and used for military purposes.[16] Several U.S. civic leaders and scholars were consulted about the city-planning project. Reconstruction began about 1950 with the rebuilding of the Inari Bridge. Hiroshima Castle was restored in 1957 and houses a museum of city history.

The Hiroshima Peace Memorial Museum was opened in 1955 in the Peace Park.[17] A cenotaph shaped like an enormous saddle, resembling the small clay saddles placed in ancient Japanese tombs, contains a stone chest with a scroll listing the names of those killed. The Japanese architect Tange Kenzo designed the museum and cenotaph, and the American artist Isamu Noguchi sculpted two peace bridges for the park. Every August 6, a commemorative service is held at the park. Millions of origami paper cranes, the Japanese symbol of longevity and happiness, are heaped about the Children's Peace Memorial throughout the year.

Hiroshima was proclaimed a City of Peace by the Japanese parliament in 1949, through the initiative of its mayor, Shinzo Hamai (浜井 信三) 1905–1968). As a result, the city of Hiroshima received international attention as an appropriate venue for international conferences on peace as well as social issues. As part of that effort, the Hiroshima Interpreters' and Guide's Association (HIGA) was established in 1992 to facilitate translation services for conferences, and the Hiroshima Peace Institute was established in 1998 within Hiroshima University. The city government continues to advocate the abolition of all nuclear weapons and the Mayor of Hiroshima is the President of Mayors for Peace, an international organization mobilizing cities and citizens worldwide to abolish and eliminate nuclear weapons by the year 2020[18][19][20]

Hiroshima is the industrial center for the Chūgoku-Shikoku region, and is centered along the coast. Hiroshima has long been a port city and goods are shipped both through Hiroshima port and Hiroshima International Airport. Industries in Hiroshima include the production of steel, automobiles, rubber, chemicals, ships, and transport machinery. The city is Japan's major supplier of needles.

Hiroshima’s largest industry is the manufacture of cars (Mazda), car parts and industrial equipment. Mazda Motor Company, now controlled by the Ford Motor Company, is Hiroshima's dominant company, accounting for 32 percent of Hiroshima's GDP.[21] Mazda produces many models in Hiroshima for worldwide export, including the popular MX-5/Miata, Mazda Demio(Mazda2), Mazda CX-9 and Mazda RX-8. The Mazda CX-7 has been built there since early 2006. 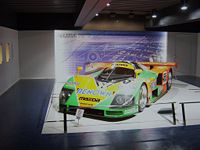 Mazda 787B at the Mazda Museum in Hiroshima

General machinery and equipment also account for a large portion of Hiroshima’s exports. To support these industries, Hiroshima has many innovative companies engaged in the research and development of new technologies, such as Hiroshima Vehicle Engineering Company (HIVEC). Some of these companies hold the top market share in their industry, or are alone in their particular field. Tertiary industries in the wholesale and retail areas are also very developed.

The concentration of industry in Hiroshima has brought together skilled personnel and fundamental technologies, making it attractive to business. Business setup costs are lower than in other large Japanese cities, and there is a comprehensive system of tax breaks for companies which relocate to Hiroshima. The Hiroshima Station Urban Development District and the Seifu Shinto area offer capital installments (up to 501 million yen over 5 years), tax breaks and employee subsidies. Seifu Shinto, which translates as “West Wind, New Town,” the largest construction project in the region, is an attempt to build "a city within a city," providing places to work, play, relax and live.

Hiroshima was recently added to Lonely Planet's list of the top cities in the world. Commuting times rank amongst the shortest in Japan and the cost of living is lower than other large cities in Japan such as Tokyo, Osaka, Kyoto, or Fukuoka. 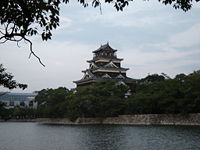 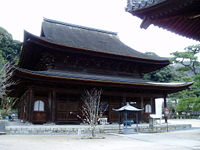 A national treasure, Fudōin Kondō was built in 1540

Hiroshima's rebuilt castle (nicknamed Rijō, meaning Koi Castle) houses a museum of life in the Edo period. Hiroshima Gokoku Shrine is within the walls of the castle. Other attractions in Hiroshima include Shukkei-en, Fudōin, Mitaki-dera (三瀧寺), and Hijiyama Park. 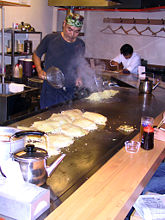 A man prepares okonomiyaki in a restaurant in Hiroshima

Hiroshima is known for okonomiyaki, a type of elegant omelette/pancake cooked on a hot-plate (usually right in front of the customer). It is cooked with various ingredients, which are layered rather than mixed together as in the Osaka version of okonomiyaki. The layers are typically egg, cabbage, bean sprouts, sliced pork/bacon with optional items (mayonnaise, fried squid, octopus, cheese, mochi, kimchi, and so on), and noodles (soba, udon) topped with another layer of egg and a generous dollop of okonomiyaki sauce. The cabbage is piled very high and is generally pushed down as it cooks. The order of the layers may vary slightly depending on the chef's style and preference, and ingredients will vary depending on the preference of the customer.

Hiroshima is home to several professional and non-professional sports teams. Baseball fans immediately recognize the city as the home of the Hiroshima Toyo Carp. Six-time champions of Japan's Central League, the team has gone on to win the Japan Series three times. Kohei Matsuda, owner of Toyo Kogyo, was primary owner of the team from the 1970s until his death in 2002.[23] The team is now owned by members of the Matsuda family, while Mazda has minority ownership of the team. The Carp play at Hiroshima Municipal Stadium, which was built in 1957 in central Hiroshima, near the A-Bomb Dome. The city is planning a new baseball stadium near the JR Hiroshima Station, to be ready in time for the 2009 season.[24]. Sanfrecce Hiroshima is the city's J. League football team. In 1994, the city of Hiroshima hosted the Asian Games. 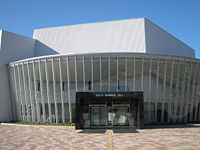 The Astram Line opened for the 1994 Asian Games in Hiroshima, with one line from central Hiroshima to Seifu Shinto and Hiroshima Big Arch, the main stadium of the Asian Games. Astram uses rubber-tired metro cars, and provides service to areas in the suburbs that are not served by Hiroden streetcars.[26] The Skyrail Midorizaka Line is a monorail that operates between Midoriguchi and Midori-Chūō, making three stops.

Within Japan, Hiroshima has a similar relationship with Nagasaki which also suffered by an atomic bomb.