Hishikawa Moronobu (菱川師宣; 1618 – July 25, 1694) was a Japanese painter and printmaker known as the first great master of the ukiyo-e (“pictures of the floating world”), a genre depicting entertainment districts and other scenes of urban life. Hishikawa's importance lies in his effective consolidation of the ephemeral styles of early genre painting and illustration. His style, one of controlled, powerful brushstrokes and solid, dynamic figures provided the groundwork for ukiyo-e masters of the following two centuries.

Hishikawa lived during the Genroku period (Japanese: 元禄; September 30, 1688 – March 13, 1704), which is considered to be the golden era of the Edo age. The increasing prosperity of artisans and tradesmen in Edo created a demand for art depicting the pleasure districts and popular kabuki actors. Hishikawa developed the mass reproduction of paintings and prints to make them accessible to a large audience. His famous ichimai-e (Mikaeri Bijin, “Turning Back Beauty” or “A Beauty Looking Over Her Shoulder”) was printed as a postal stamp just after World War II in Japan. It created a sensation and generated a great interest in stamp collecting as a hobby.

Hishikawa was born in 1618, the son of a well-respected dyer and a gold and silver-thread embroiderer in the village of Hodamura, Awa Province (Chiba), on the Boso Peninsula (房総半島, Bōsō-hantō) near Edo Bay. Its present name is Kyonan (鋸南町; -machi); in Hishikawa’s day it was a fishing village famous for its harbor connected with Edo.

In 1657 the Great Fire of Meireki destroyed 60 to 70 percent of Edo (the predecessor of modern-day Tokyo) and Edo Castle. This fire burned for two days and claimed between 30,000 and 100,000 victims. It is often compared to the Great Fires of London and Rome. The Tokugawa Shogunate had just united Japan as a nation, and immediately began a great reconstruction which transformed the appearance of the city. The area around Edo Castle was cleared of buildings to prevent future fires, and its temples and shrines were moved to the banks of Sumida River. The leaders of this reconstruction were people who came from the countryside in search of a new life; among them was Hishikawa, later known as ”the father of ukiyo-e.” In Edo, Hishikawa, who had learned his father's craft, studied both Tosa and Kanō-style painting. He had a solid grounding in both decorative crafts and academic painting when he then turned to ukiyo-e, which he studied with his mentor, the Kambun Master.

The Genroku period, considered to be the golden era of the Edo age, was just beginning. The reigning emperor was Higashiyama, the reigning shogun was Tokugawa Tsunayoshi, nicknamed the "dog shogun." One hundred years of peace and seclusion had led to economic stability in Japan, and the arts and architecture were flourishing. To finance the splendor of the Genroku era, the Shogunate reduced the quality of coins, which caused rampant inflation (to solve this crisis, the Kyoho Reforms were carried out a few years after the era ended.)

In Edo, tradesmen and artisans started to gain economic power and social status, while court nobles and the samurai classes still dominated the arts and culture in the Kyoto-Osaka district. As the tradesmen and artisans in Edo became able to afford the enjoyment of art, there was an increased demand for pictures. The artistic sense and taste for beauty of the Edo tradesmen differed from that of the samurai and aristocratic classes in Kyoto and Osaka. They demanded genre paintings depicting the pleasure districts and popular kabuki actors. During his forties, Hishikawa gained a reputation as a painter and printmaker in this genre.

His first known signed and dated works were book illustrations from 1672, although earlier works may yet surface. Hishikawa began to illustrate story books using wood-block prints, and developed a technique for the mass reproduction of paintings to make them accessible to a large public. There remain today more than sixty books bearing his signed illustrations. By the mid-1670's Hishikawa had already become the most important ukiyo-e printmaker, a position he maintained until his death. He also became well-known as a painter. Favorite subjects for his scroll and screen paintings included flower viewing at Ueno, people enjoying the evening breeze along the Sumida River in summer, and people attending plays. It seems that he received many contract orders, and some of his works were produced in ateliers where he employed several pupils. He was successful in popularizing some of his originally one-of-a-kind paintings by making near-copies as woodblock prints.

Hishikawa’s works include The Gay Quarters and the Kabuki Theatre,” the 12 ichimai-e (single-sheet print) series, Scenes from the Gay Quarters at Yoshiwara, and the famous ichimai-e (“A Beauty Looking over Her Shoulder”). He produced a total of only 12 hand scrolls, but each of these was later adapted to multiple production in the form of monochrome woodblock prints. Hishikawa's pupils of a somewhat later generation experimented with large monochrome prints based on what were originally hand-painted bijinga (pictures of beautiful women) produced as hanging scrolls.

Hishikawa was not the "founder" of ukiyo-e as some early scholars surmised. Instead, with Hishikawa we find an impressive assimilation of inchoate ukiyo-e designs by previous artists, a consolidation of genre and early ukiyo-e painting and prints. It was Hishikawa who created the first truly mature form of ukiyo-e in a style of great strength and presence that would set the standards for generations of artists who followed. Hishikawa's mastery of line has often been cited in assessments of his work, as well as his harmonious and interactive arrangements of figures, who seem to serve a dramatic function not usually seen in the work of his predecessors. 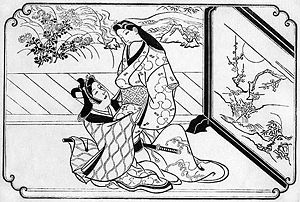 The design shown here belongs to an unsigned and untitled set of twelve shunga (explicit erotica or "spring pictures," which in Hishikawa's day were actually called makura-e, or "pillow pictures") dating to the late 1670s or early 1680s. Some of Hishikawa's prints are found with hand coloring, but this specimen is a sumi-e (print with black pigment only) in its original, uncolored state. There is something almost elemental in Hishikawa's line work and figure placements in black and white, which most often was diminished into more decorative effects when colors were applied by hand. The black and gray lines and solid areas contrast boldly with the white paper to produce a range of tonal values, with emphasis on the shape and movement of the lines and the "positive" values of the white spaces. As in many other designs by Hishikawa, the artist was inventive in his use of curvilinear forms juxtaposed against straight diagonals.

Groupings of twelve images had been common for centuries in court and genre paintings. Among the more famous surviving early specimens were the painted single sheets by the master Tosa Mitsunobu (1434-1525). Thus, Hishikawa's adoption of a grouping of twelve was quite conventional, particularly as such an arrangement afforded a context in which to alter the furnishings, clothing, and design patterns, matched more or less to the months of the year. Hishikawa's formalism is evident here, with curves and straight lines balanced in near perfect proportion.

In 1948, just after World War II, Japan was still littered with wrecked barracks and there was an atmosphere of chaos. In that year the postal stamps based on Hishikawa's Mikaeri Bijin (“Turning Back Beauty” or “A Beauty Looking over Her Shoulder”) were issued, causing a sensation. This original picture had been painted about three hundred years before. The beauty was resurrected as an attractive figure as well as a representative of the Edo age, reminiscent of a time of peace and artistic glory.Hishikawa

Hishikawa knew well how to paint an enthralling picture. The original picture, 63 by 31.2 centimeters, is in safekeeping with the Tokyo National Museum (東京国立博物館). The picture depicts a strikingly beautiful Edo girl in vivid colors. She is seen from behind, as she turns her head by chance to look back over her shoulder. In Japanese culture, subtle beauty is often preferred to outright beauty, and this ideal is portrayed in the Mikaeri Bijin. It is not a woodblock print but an original drawing by Hishikawa himself. The signature alongside the beauty is Boyo-Hishikawa-Yuchiku. Boyo stands for Awa Province and Yuchiku signifies Hishikawa’s later pen name.