Memorial portrait of Hiroshige by Kunisada.

Utagawa Hiroshige, (歌川広重; 1797 in Edo (Tokyo) – October 12, 1858, also had the professional names "Andō Hiroshige" (安藤広重) (sometimes erroneously romanized as "Andro Hiroshige and "Ichiyusai Hiroshige") was one of the last great ukiyo-e (“pictures of the floating world”) masters of the color wood-block print. His subjects included flowers, fish and birds, but his most important prints are landscapes, often intimate, lyrical scenes of snow, rain, mist or moonlight. He was even more successful than his contemporary, Hokusai, together with whom he is considered one of the dominant figures of printmaking during the first half of the nineteenth century.

His genius was recognized in the West by the Impressionists and Post Impressionists, many of whom were influenced by his works. Whistler drew inspiration from Hiroshige for his nocturnal scenes. Today Hiroshige is represented in the art museums of Tokyo, London, New York City and Boston.

Hiroshige was born "Andō Tokutarō" in 1797 in the Yayosu barracks, just east of Edo Castle by the banks of the Yaesu River in the city of Edo (present-day Tokyo), Japan. His father was Andō Gen'emon, a hereditary retainer (of the dōshin rank) of the shōgun. An official within the fire-fighting organization whose duty was to protect Edo Castle from fire. Gen'emon and his family, along with thirty other samurai, lived within one of the ten barracks; although their salary of sixty koku marked them as a minor family, it was a stable position, and an easy one. The thirty samurai officials of a barracks, including Gen'emon, would oversee the efforts of the three hundred lower-class workers who also lived within the barracks. 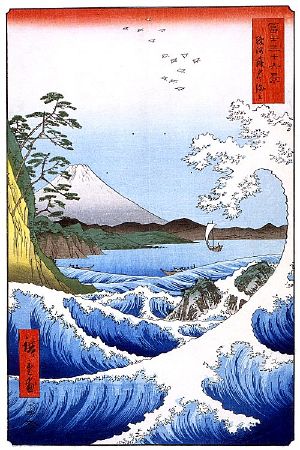 View of Mount Fuji from Satta Point in the Suruga Bay, woodcut by Hiroshige, published posthumously 1859.

Legend has it that Hiroshige determined to become a ukiyo-e artist when he saw the prints of his near-contemporary, Hokusai published some of his greatest prints, such as Thirty-six views of Mount Fuji in 1832, the year that Hiroshige devoted himself full-time to his art. From then until Hokusai's death in 1849, their landscape works competed for the same customers.

His natural inclination towards drawing marked him for an artistic life. As a child, he had played with miniature landscapes, and he was already moderately well-known for a remarkably accomplished painting in 1806 of a procession of delegates to the Shogun from the Ryukyu Islands. In the spring of 1809, when Hiroshige was 12 years of age, his mother died. Soon after, his father resigned his post and passed it on to his son, before dying early the following year. Hiroshige's actual duties as a fire warden were minimal, and his wages were small. Like many other low-ranked samurai, Hiroshige found his salary insufficient for his needs, and this motivated him to produce artisanal crafts to supplement his income. He began by being tutored in the Kano school's style of Chinese painting by his friend, Okajima Rinsai. These studies (such as a study of perspective in images imported by the Dutch) prepared him for an apprenticeship. He first attempted to enter the studio of the extremely successful Utagawa Toyokuni, but was rejected. Eventually, in 1811, at the age of 15, he embarked upon an apprenticeship with the noted Utagawa Toyohiro (he was rejected again upon his first attempt to enter Toyohiro's studio). Toyohiro bestowed upon him the name "Utagawa" after only a year instead of the usual two or three years. Hiroshige would later take his master's name, becoming "Ichiyusai Hiroshige." Although he received a school license at an early age, Hiroshige showed little sign of the artistic genius he would later be known for.

Hiroshige published his first genuinely original works in 1818, the year he was commended for his heroism in fighting a fire at Ogawa-nichi. His Eight Views of Lake Biwa bore the signature "Ichiyūsai Hiroshige." Between 1811 and 1818, it is likely that he did small jobs like inexpensive fan paintings and studied the Kano and impressionistic Shijo styles which strongly influenced his later works.

Hiroshige’s great talent developed during the 1830s. In 1831 Famous Places in the Eastern Capital (1831) attracted his first real public notice. As soon as it was possible, Hiroshige transferred the post of fire warden to his own son, Nakajiro, and devoted himself to his art. In 1839, Hiroshige's first wife, a woman from the Okabe family, died. Hiroshige re-married with O-yasu, the daughter of a farmer named Kaemon.

In his declining years, Hiroshige still produced thousands of prints to meet the demand for his works, but few were as good as those of his early and middle periods. He was pushed to produce large quantities of prints by the fact that he was poorly paid per series, although he was still capable of remarkable art. His great 100 Famous Views of Edo was paid for in advance by a wealthy Buddhist priest in love with the daughter of the publisher (one Uoya Eikichi, a successful fishmonger turned publisher).

In 1856, the year he began his 100 Famous Views of Edo, Hiroshige "retired from the world," becoming a Buddhist monk. He died at the age of 62 during the great Edo cholera epidemic of 1858 (whether the epidemic killed him is unknown) and was buried in a Zen Buddhist temple in Asakusa. Just before his death, he left a poem:

"I leave my brush in the East
And set forth on my journey.
I shall see the famous places in the Western Land."

(The Western Land refers to the strip of land by the Tokkaido between Kyoto and Edo, but also to the Paradise of the Amida Buddha). 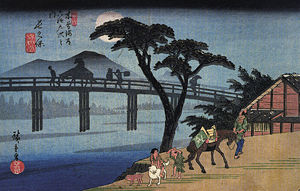 A rather dark printing of the view sometimes dubbed "Man on Horseback Crossing a Bridge." From the series Sixty-nine Stations of the Kisokaido, this is View 28 and Station 27 at Nagakubo, depicting the Wada Bridge across the Yoda River[1].

Hiroshige's artistic life passed through several stages. During his student period, from about 1811 to 1830, he largely followed the work of his elders and produced figure prints of girls, actors, and samurai, or warriors. The second stage was his first landscape period, from 1830 to about 1844, when he created his own romantic ideal of landscape design and bird-and-flower prints and produced his famed and other series of prints depicting landscape vistas in Japan. From 1844 to 1858, during his later period of landscape and figure-with-landscape designs, overpopularity and overproduction tended to diminish the quality of his work.

In his early career, Hiroshige largely confined himself to common ukiyo-e themes such as women (bijin-ga) and actors (yakushae); nor did he fully devote himself to his art. He made a dramatic turn when, after seventeen years, his master Toyohiro died, and Hiroshige came out with the landscape series Views of Edo (1831), which was critically acclaimed for its composition and colors. With Fifty-three Stations of the Tōkaidō (1833 – 1834), his success was assured; the prints were immensely popular.

“Fifty-three Stations of the Tokaido”

In 1832 Hiroshige was invited to join an embassy of Shogunal officials to the Imperial court. He made a trip between Edo and Kyoto along the famed highway called the Tōkaidō Road (or "Eastern Sea Route"), which wended its way for 490 kilometers along the shoreline, through a snowy mountain range, past Lake Biwa, and finally to Kyōto. He stayed at the fifty-three overnight stations along the road and made numerous sketches of everything he saw, then published a series of 55 landscape prints entitled the “Fifty-three Stations on the Tokaido;” one for each station, as well as the beginning of the highway and the arrival in Kyoto.

The prints, along with details of day, location, and anecdotes of his fellow travelers, were an immediate success and became the basis of Hiroshige's fame. Hiroshige became one of the most popular ukiyo-e artists of all time. For the next twenty years he concentrated his efforts on landscape prints, making numerous other journeys within Japan and issuing such series of prints as “Famous Places in Kyoto” (1834), “Eight Views of Lake Biwa” (1835), “Sixty-nine Stations on the Kiso Highway” (c. 1837), and “One Hundred Views of Edo” (1856–58). He repeatedly executed new designs of the fifty-three Tokaido views, in which he employed his unused sketches of previous years. Hiroshige went on to produce more than 2000 (out of his estimated total of 5000 works) different prints of the Edo and Tōkaidō Road areas, as well as fine series such as Sixty-nine Stations of the Kisokaidō (1834-1842). 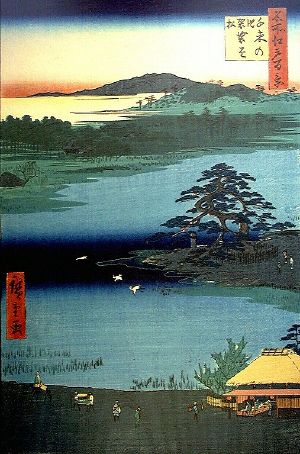 It has been estimated that Hiroshige created more than 5,000 prints and that as many as 10,000 copies were made from some of his wood blocks. Hokusai, Hiroshige's early contemporary, was the innovator of the pure landscape print. Hiroshige, who followed him, possessed the ability to reduce the pictured scene to a few simple, highly decorative elements, capturing the essence of what he saw and turning it into a highly effective composition.

He had little competition, dominating landscape prints with his unique brand of intimate, almost small-scale works. But as the years passed, Hiroshige determined to produce truly great art, and not the effortless works that characterized much of his production. In 1856, working with the publisher Uoya Eikichi, he determined to produce a series of prints of surpassing quality, made with the finest printing techniques including true gradation of color, the addition of mica to lend a unique iridescent effect, embossing, fabric printing, blind printing, and the use of glue printing (wherein ink is mixed with glue for a glittery effect). Hiroshige was now 60 years old, and had taken vows as a Buddhist monk. He was fully aware of his approaching death. 100 Famous Views of Edo (1856 – 1858) was extremely popular, and eventually reached a total of 118 printings, when Hiroshige had intended only about 100. Not all of the prints were by him, as he died in 1858.

Hiroshige was the younger rival of Katsushika Hokusai. His series of prints Fifty-three Stations of the Tokaido (1833 – 1834) and 100 Famous Views of Edo (1856 – 1858) influenced French impressionists like Monet and the Mir iskusstva (e.g., Ivan Bilibin); Vincent Van Gogh copied two of the Hundred Famous Views of Edo. Whistler drew inspiration from Hiroshige for his nocturnal scenes. Today Hiroshige is represented in the major art museums of Tokyo, London, New York City and Boston.

Retrieved from https://www.newworldencyclopedia.org/p/index.php?title=Hiroshige&oldid=1008653
Categories:
Hidden category:
This page was last edited on 9 January 2018, at 15:57.
Content is available under Creative Commons Attribution/Share-Alike License; additional terms may apply. See Terms of Use for details.