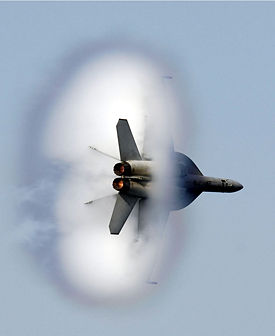 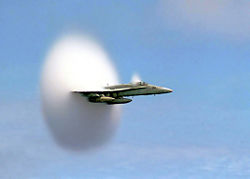 U.S. Navy F/A-18 breaking the sound barrier. The white halo is formed by condensed water droplets which are thought to result from a drop in air pressure around the aircraft (see Prandtl-Glauert Singularity).[1]

Sounds are traveling vibrations (pressure waves) in an elastic medium. In gases, sound travels longitudinally at different speeds, mostly depending on the molecular mass and temperature of the gas; (pressure has little effect). Because air temperature and composition vary significantly with altitude, Mach numbers for aircraft can change without variation of airspeed. In water at room temperature, supersonic can be considered as any speed greater than 1,440 m/s (4,724 ft/s). In solids, sound waves can be longitudinal or transverse and have even higher velocities.

Supersonic fracture is crack motion faster than the speed of sound in a brittle material.

In aerodynamics, the "sound barrier" usually refers to the point at which an aircraft moves from transonic to supersonic speed. The term came into use during World War II, when a number of aircraft started to encounter the effects of compressibility, a grab-bag of unrelated aerodynamic effects, when approaching supersonic speed. The term fell out of use in the 1950s, when aircraft started to routinely "break" the sound barrier.

Most spacecraft, most notably the Space Shuttle are supersonic at least during portions of their reentry, though the effects on the spacecraft are reduced by low air pressures. During ascent, launch vehicles generally avoid going supersonic below 30 km (~98,400 feet) to reduce air drag.

The aerodynamics of supersonic flight are simpler than those for subsonic flight because the airsheets at different points along the plane often cannot affect each other. However, the aircraft being designed must be efficient and stable at supersonic, transonic, and subsonic flight. Thus the overall aerodynamic principles that operate when designing a supersonic aircraft are fairly complex.

Supersonic jets and rocket vehicles require several times greater thrust to push through the extra drag experienced within the transonic region (around Mach 0.85-1.2). When designing aircraft intended to attain these speeds, aerospace engineers have to ensure that air is gently guided around the fuselage without producing new shock waves. Designers use certain rules (the Supersonic area rule and the Whitcomb area rule) to minimize sudden changes in cross-sectional area that could lead to shock waves along the body.

At high speeds, aerodynamic heating can occur. Therefore, an aircraft must be designed to operate and function under very high temperatures. For example, the SR-71 Blackbird jet could fly continuously at Mach 3.1 while some parts were above 315°C (600°F).