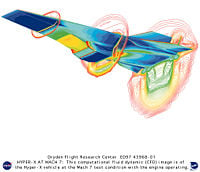 In aerodynamics, hypersonic speeds are speeds that are highly supersonic. Since the 1970s, the term has generally been used to refer to speeds equal to and greater than Mach 5, or five times the speed of sound. The hypersonic regime is a subset of the supersonic regime.

Supersonic airflow is decidedly different from subsonic flow. Nearly everything about the way an aircraft flies changes dramatically as an aircraft accelerates to supersonic speeds. Even with this strong demarcation, there is still some debate as to the definition of "supersonic." One definition is that the aircraft, as a whole, is traveling at Mach 1 or greater. More technical definitions state that supersonic speed is achieved only if the airflow over the entire aircraft is supersonic, which occurs around Mach 1.2 on typical designs. The range Mach 0.75 to 1.2 is therefore considered transonic.

Considering the problems with this simple definition, the precise Mach number at which a craft can be said to be fully hypersonic is even more elusive, especially since physical changes in the airflow (molecular dissociation, ionization) occur at quite different speeds. Generally, a combination of effects become important "as a whole" around Mach 5. The hypersonic regime is often defined as speeds where ramjets do not produce net thrust. This is a nebulous definition in itself, as there exists a proposed change to allow them to operate in the hypersonic regime (the Scramjet).

As Mach numbers increase, the entropy change across the shock also increases, which results in a strong entropy gradient and highly vortical flow that mixes with the boundary layer.

High temperatures discussed previously as a manifestation of viscous dissipation cause non-equilibrium chemical flow properties such as dissociation and ionization of molecules resulting in convective and radiative heating.

The hypersonic flow regime is characterized by a number of effects which are not found in typical aircraft operating at low subsonic Mach numbers. The effects depend strongly on the speed and type of vehicle under investigation.

Hypersonic flows, however, require other similarity parameters. Firstly, the analytic equations for the Oblique shock angle become nearly independent of Mach number at high (~>10) Mach numbers. Secondly, the formation of strong shocks around aerodynamic bodies mean that the freestream Reynolds number is less useful as an estimate of the behavior of the boundary layer over a body (although it is still important). Finally, the increased temperature of hypersonic flows mean that real gas effects become important. For this reason, research in hypersonics is often referred to as aerothermodynamics, rather than aerodynamics.

The introduction of real gas effects mean that more variables are required to describe the full state of a gas. Whereas a stationary gas can be described by three variables (pressure, temperature, adiabatic index), and a moving gas by four (velocity), a hot gas in chemical equilibrium also requires state equations for the chemical components of the gas, and a gas in nonequilibrium solves those state equations using time as an extra variable. This means that for a nonequilibrium flow, something between 10 and 100 variables may be required to describe the state of the gas at any given time. Additionally, rarefied hypersonic flows (usually defined as those with a Knudsen number above one) do not follow the Navier-Stokes equations.

Wallace D. Hayes developed a similarity parameter, similar to the Whitcomb area rule, which allowed similar configurations to be compared.

Hypersonic flow can be approximately separated into a number of regimes. The selection of these regimes is rough, due to the blurring of the boundaries where a particular effect can be found.

In this regime, the gas can be regarded as an ideal gas. Flow in this regime is still Mach number dependent. Simulations start to depend on the use of a constant-temperature wall, rather than the adiabatic wall typically used at lower speeds. The lower border of this region is around Mach 5, where Ramjets become inefficient, and the upper border around Mach 10-12.

This is a subset of the perfect gas regime, where the gas can be considered chemically perfect, but the rotational and vibrational temperatures of the gas must be considered separately, leading to two temperature models. See particularly the modeling of supersonic nozzles, where vibrational freezing becomes important.

Above around 12 km/s, the heat transfer to a vehicle changes from being conductively dominated to radiatively dominated. The modeling of gases in this regime is split into two classes:

The modeling of optically thick gases is extremely difficult, since, due to the calculation of the radiation at each point, the computation load theoretically expands exponentially as the number of points considered increases.