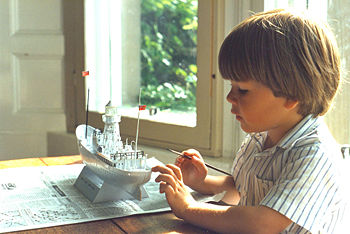 Flow is the mental state of operation in which the person is fully immersed in what he or she is doing, characterized by a feeling of energized focus, full involvement, and success in the process of the activity. Proposed by psychologist Mihaly Csikszentmihalyi, the concept of flow has been found valuable in Positive psychology, and has been widely referenced across a variety of fields.

The concept of the state of flow is similarly found in the traditions of the Far Eastern thoughts, such as Zen and Daoism. The concept is expressed in those traditions as a state of total oneness of mind-body, the oneness of the self and the world.

Many other terms and idioms exist for this mental state: To be "on the ball," "in the zone," or "in the groove." Flow can also be associated with such concepts as play and joy, which are fundamental to human existence.

In his seminal work, Flow: The Psychology of Optimal Experience, Csikszentmihalyi outlined his theory that people are most happy when they are in a state of flow—a state of concentration or complete absorption with the activity at hand and the situation. The idea of flow is identical to the feeling of being, colloquially, "in the zone" or "in the groove." The flow state is an optimal state of intrinsic motivation, where the person is fully immersed in what he or she is doing. This is a feeling everyone has at times, characterized by a feeling of great freedom, enjoyment, fulfillment, and skill—and during which temporal concerns (time, food, ego-self, etc.) are typically ignored.

Did you know?
In Positive psychology "Flow" is a state of absorption in an activity and an intrinsically rewarding experience

In an interview with Wired Magazine, Csikszentmihalyi described flow as

being completely involved in an activity for its own sake. The ego falls away. Time flies. Every action, movement, and thought follows inevitably from the previous one, like playing jazz. Your whole being is involved, and you're using your skills to the utmost.[1]

To achieve a flow state, a balance must be struck between the challenge of the task and the skill of the performer. If the task is too easy or too difficult, flow cannot occur.

The flow state also implies a kind of focused attention, and indeed, it has been noted that mindfulness, meditation, yoga, and martial arts seem to improve a person's capacity for flow. Among other benefits, all of these activities train and improve attention.

In short; flow could be described as a state where attention, motivation, and the situation meet, resulting in a kind of productive harmony or feedback.

Csikszentmihalyi identified the following as accompanying an experience of flow:

Not all are needed for flow to be experienced.

Flow is so named because during Csikszentmihalyi's 1975 interviews, several people described their "flow" experiences using the metaphor of a current carrying them along. The psychological concept of flow as becoming absorbed in an activity is thus unrelated to the older phrase, "to go with the flow," which means "to conform."

Csikszentmihalyi suggests several ways in which a group could work together so that each individual member could achieve flow. The characteristics of such a group include:

Applications suggested by Csikszentmihalyi versus other practitioners

It is worth noting that only Csikszentmihalyi seems to have published suggestions for extrinsic applications of the Flow concept, such as design methods for playgrounds to elicit the Flow experience. Other practitioners of Csikszentmihalyi's Flow concept, generally those working under the umbrella of Positive psychology, have focused on intrinsic applications, such as spirituality, performance improvement, or self-help. Reinterpretations of Csikszentmihalyi's Flow process exist to improve performance in areas as diverse as business[3] piano improvisation, sport psychology,[4] and standup comedy.[5]

For millennia, practitioners of Eastern religions such as Buddhism and Taoism have honed the discipline of overcoming the duality of mind-body and the self and the world as a central feature of spiritual development. Eastern spiritual practitioners have developed a very thorough and holistic set of theories, tested, and refined through spiritual practices.

The phrase, "being at one with things" is a metaphor of Csikszentmihalyi's Flow concept. Practitioners of the varied schools of Zen Buddhism apply concepts similar to Flow to aid their mastery of art forms, including, in the case of Japanese Zen Buddhism, Aikido, Kendo, and Ikebana.

The idea of overcoming duality of self and object is a key theme of Zen and the Art of Motorcycle Maintenance: An Inquiry into Values, by Robert Pirsig (1974). "When you're not dominated by feelings of separateness from what you're working on, then you can be said to 'care' about what you're doing. That is what caring really is: 'a feeling of identification with what one's doing.' When one has this feeling then you also see the inverse side of caring, quality itself."[6]

In education, there is the concept of overlearning, which seems to be an important factor in this technique, in that Csikszentmihalyi (1990) states that overlearning enables the mind to concentrate on visualizing the desired performance as a singular, integrated action instead of a set of actions.

The concept of "being in the zone" during an athletic performance fits within Csikszentmihalyi's description of the Flow experience, and theories and applications of "being in the zone" and its relationship with athletic competitive advantage are topics studied in the field of sport psychology. Musicians, especially improvisational soloists can experience a similar state of mind while playing their instrument.

Roy Palmer suggested that "being in the zone" may also influence movement patterns as better integration of the conscious and subconscious reflex functions improves coordination.[7] Many athletes describe the effortless nature of their performance whilst achieving personal bests.

The legendary soccer player, Pelé, described his experience of being in the zone: "I felt a strange calmness … a kind of euphoria. I felt I could run all day without tiring, that I could dribble through any of their team or all of them, that I could almost pass through them physically."[8]

Another example was given by Formula 1 driver Ayrton Senna, who during qualifying for the 1988 Monaco Grand Prix felt like driving the car beyond his limits. "I was already on pole, […] and I just kept going. Suddenly I was nearly two seconds faster than anybody else, including my team mate with the same car. And suddenly I realized that I was no longer driving the car consciously. I was driving it by a kind of instinct, only I was in a different dimension. It was like I was in a tunnel. Not only the tunnel under the hotel but the whole circuit was a tunnel. I was just going and going, more and more and more and more. I was way over the limit but still able to find even more."[9]

The same concept of flow is used in video games. After mastering the game's learning curve or sometimes even completely at random, the player may experience an increase of skill for no determined amount of time. Many (or all) key aspects of flow mentioned above are easily identifiable here. One of the most notable genres for getting the player "in the zone" is the music simulation genre, such as Dance Dance Revolution or Guitar Hero. The player may notice a sudden increase in ease of a song, lasting for one or many songs in succession.

Retrieved from https://www.newworldencyclopedia.org/p/index.php?title=Flow_(psychology)&oldid=1077932
Categories:
Hidden category:
This page was last edited on 3 September 2022, at 00:41.
Content is available under Creative Commons Attribution/Share-Alike License; additional terms may apply. See Terms of Use for details.