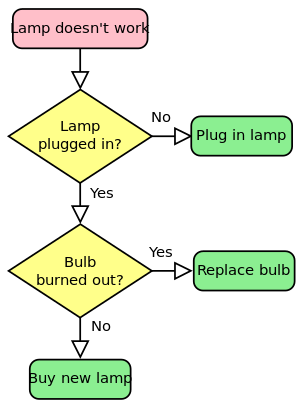 A simple flowchart showing what steps to take if a lamp does not work.

A flowchart is a common type of chart that represents an algorithm or process, showing the steps as boxes of various kinds and the order of steps by arrows that connect the boxes. It may also contain other symbols, such as circles, to represent converging paths in the chart.

Flowcharts are used in designing or documenting processes or programs in various fields. They help the viewer understand and get an overview of the process, also providing the opportunity to detect flaws and to come up with better ways of carrying out the process.

The two most common types of boxes in a flowchart are:

There are many different types of flowchart, and each type has its own repertoire of boxes and notational conventions.

Flowcharts are used in designing and documenting complex processes.[1] Like other types of diagram, they help visualize what is going on and thereby help the viewer to understand a process, and perhaps also find flaws, bottlenecks, and other less-obvious features within it.

Flowcharts depict certain aspects of processes and they are usually complemented by other types of diagram. For instance, Kaoru Ishikawa defined the flowchart as one of the seven basic tools of quality control, next to the histogram, Pareto chart, check sheet, control chart, cause-and-effect diagram, and the scatter diagram.[2] Likewise, in Unified Modeling Language (UML), a standard concept-modeling notation used in software development, the activity diagram, which is a type of flowchart, is just one of many different diagram types.

Nassi-Shneiderman diagrams are an alternative notation for process flow.

The first structured method for documenting process flow, the "flow process chart," was introduced by Frank Gilbreth to members of American Society of Mechanical Engineers (ASME) in 1921 as the presentation “Process Charts—First Steps in Finding the One Best Way.” Gilbreth's tools quickly found their way into industrial engineering curricula. In the early 1930s, an industrial engineer, Allan H. Mogensen began training business people in the use of some of the tools of industrial engineering at his Work Simplification Conferences in Lake Placid, New York.

A 1944 graduate of Mogensen's class, Art Spinanger, took the tools back to Procter and Gamble where he developed their Deliberate Methods Change Program. Another 1944 graduate, Ben S. Graham, Director of Formcraft Engineering at Standard Register Corporation, adapted the flow process chart to information processing with his development of the multi-flow process chart to display multiple documents and their relationships. In 1947, ASME adopted a symbol set derived from Gilbreth's original work as the ASME Standard for Process Charts.

According to Herman Goldstine, he developed flowcharts with John von Neumann at Princeton University in late 1946 and early 1947.[3]

Flowcharts used to be a popular means for describing computer algorithms, and they are still used for this purpose. Modern techniques such as Unified Modeling Language (UML) activity diagrams can be considered extensions of the flowchart. However, their popularity decreased when, in the 1970s, interactive computer terminals and third-generation programming languages became the common tools of the trade, since algorithms can be expressed much more concisely and readably as source code in such a language. Often, pseudo-code is used, which uses the common idioms of such languages without strictly adhering to the details of a particular one.

A typical flowchart from older Computer Science textbooks may have the following kinds of symbols:

Start and end symbols
Represented as lozenges, ovals or rounded rectangles, usually containing the word "Start" or "End," or another phrase signaling the start or end of a process, such as "submit enquiry" or "receive product."

Arrows
Showing what's called "flow of control" in computer science. An arrow coming from one symbol and ending at another symbol represents that control passes to the symbol the arrow points to.

Input/Output
Represented as a parallelogram. Examples: Get X from the user; display X.

Conditional or decision
Represented as a diamond (rhombus). These typically contain a Yes/No question or True/False test. This symbol is unique in that it has two arrows coming out of it, usually from the bottom point and right point, one corresponding to Yes or True, and one corresponding to No or False. The arrows should always be labeled. More than two arrows can be used, but this is normally a clear indicator that a complex decision is being taken, in which case it may need to be broken-down further, or replaced with the "pre-defined process" symbol.

A number of other symbols that have less universal currency, such as:

Flowcharts may contain other symbols, such as connectors, usually represented as circles, to represent converging paths in the flow chart. Circles will have more than one arrow coming into them but only one going out. Some flow charts may just have an arrow point to another arrow instead. These are useful to represent an iterative process (what in Computer Science is called a loop). A loop may, for example, consist of a connector where control first enters, processing steps, a conditional with one arrow exiting the loop, and one going back to the connector. Off-page connectors are often used to signify a connection to a (part of another) process held on another sheet or screen. It is important to remember to keep these connections logical in order. All processes should flow from top to bottom and left to right.

A flowchart for computing factorial N (N!) Where N! = 1 * 2 * 3 *...* N. This flowchart represents a "loop and a half"—a situation discussed in introductory programming textbooks that requires either a duplication of a component (to be both inside and outside the loop) or the component to be put inside a branch in the loop.

Any vector-based drawing program can be used to create flowchart diagrams, but these will have no underlying data model to share data with databases or other programs such as project management systems or spreadsheets. Some tools offer special support for flowchart drawing, e.g., ConceptDraw, SmartDraw, EDraw Flowchart, Visio, and OmniGraffle.

Many software packages exist that can create flowcharts automatically, either directly from source code, or from a flowchart description language. For example, Graph::Easy, a Perl package, takes a textual description of the graph, and uses the description to generate various output formats including HTML, ASCII or SVG.

Retrieved from https://www.newworldencyclopedia.org/p/index.php?title=Flowchart&oldid=1096759
Categories:
Hidden category:
This page was last edited on 21 January 2023, at 15:41.
Content is available under Creative Commons Attribution/Share-Alike License; additional terms may apply. See Terms of Use for details.