The National Geographic Society (NGS), headquartered in Washington, D.C. in the United States, is one of the largest non-profit scientific and educational institutions in the world. Its interests include geography, archaeology and natural science, the promotion of environmental and historical conservation, and the study of world culture and history.

Founded in January 1888, it has funded more than 7,500 scientific research projects and supports an education program combating geographic illiteracy. It is estimated that it reaches more than 280 million people worldwide each month through its many media outlets. Its extremely successful National Geographic Magazine has, through its use of photojournalism and quality writing, served to bridge cultures and enlighten people to the beauty of the Earth and the plight of its environmental condition.

Formed with the mission to "increase and diffuse geographic knowledge while promoting the conservation of the world's cultural, historical, and natural resources," it is a noble mission which has succeeded in many ways.

The historical mission of the National Geographic Society is "to increase and diffuse geographic knowledge while promoting the conservation of the world's cultural, historical, and natural resources."[1] As NGS President and CEO (since March 1998), John Fahey succinctly put it; its purpose is to inspire people to care about the planet.

The Society is governed by a twenty-three member Board of Trustees composed of educators, businesspeople, scientists, former governmental officials, and conservationists. The organization sponsors and funds scientific research and exploration.

Some of the NGS' projects include: On January 13, 1888, thirty-three explorers and scientists gathered at the Cosmos Club, a private club then located on Lafayette Square in Washington, D.C., to organize "a society for the increase and diffusion of geographical knowledge."

After preparing a constitution and a plan of organization, the National Geographic Society was incorporated two weeks later on January 27. Gardiner Greene Hubbard became its first president and his son-in-law, Alexander Graham Bell, eventually succeeded him in 1897 following his death. Bell's son-in-law Gilbert Hovey Grosvenor was named the first full-time editor of National Geographic Magazine and served the organization for fifty-five years; members of the Grosvenor family have played important roles in the organization since.

Bell and his son-in-law, Grosvenor, devised the successful marketing notion of Society membership and the first major use of photographs to tell stories in magazines. The Chairman of the Board of Trustees of National Geographic in 2008 is Gilbert Melville Grosvenor, who received the Presidential Medal of Freedom in 2005 for the Society's leadership in geography education.

In 2004, the National Geographic Headquarters in Washington, D.C. was one of the first buildings to receive a "Green" certification from Global Green USA in recognition of their efforts "to support a sustainable and secure world."[5]

The Society received the prestigious Prince of Asturias Award for Communications and Humanity in October 2006 in Oviedo, Spain. 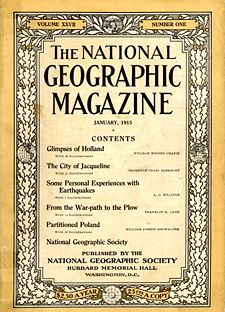 The National Geographic Magazine, later shortened to National Geographic, is the official journal of the National Geographic Society. Its first issue was published nine months after the Society was founded. It has become one of the world's best-known magazines and is immediately identifiable by the characteristic yellow border running around the edge of its cover. There are 12 monthly issues of National Geographic per year, plus additional map supplements. On rare occasions, special editions are also issued. The magazine is published in 31 language editions in many countries around the world. Combined English and other language circulation is nearly nine million monthly with more than fifty million readers per month.

It contains articles about geography, popular science, world history, culture, current events, and photography. The fame of the magazine worldwide resulted from its pioneering use of photojournalism, providing spectacular color images of nature from locations around the world. Beyond introducing the public to the beauties of nature, the magazine has more recently taken on a number of issues related to preservation and stewardship of the environment, thus contributing to human responsibility for the beauties of creation.

In addition to its flagship magazine, the Society publishes five other periodicals in the United States:

Items previously published by the Society include:

Stories by the National Geographic Society are shown on television. National Geographic specials as well as television series have been shown on PBS and other networks in the United States and globally for many years. The Geographic series in the U.S. started on CBS in 1964, moved to ABC in 1973 and shifted to PBS (produced by WQED, Pittsburgh) in 1975. It has featured stories on numerous scientific figures such as Louis Leakey, Jacques Cousteau, and Jane Goodall that not only featured their work but helped make them world-famous and accessible to millions. The specials' theme music, by Elmer Bernstein, was also adopted by the National Geographic Channel. The National Geographic Channel has begun to launch a number of subbranded channels in international markets, such as Nat Geo Wild, Nat Geo Adventure, Nat Geo Junior, and Nat Geo Music.

In 1997, internationally, and in 2001 in the United States, the Society launched, in part ownership with other entities such as News Corporation, the National Geographic Channel, a television channel with global distribution for cable and satellite viewers.

National Geographic Films, a wholly-owned taxable subsidiary of the National Geographic Society, produced a feature film based on the diary of a Russian submarine commander starring Harrison Ford in K-19: The Widowmaker, and March of the Penguins, which received an Academy Award for the Best Documentary in 2006. Arctic Tale, features the story of two families of walrus and polar bears.

The Society has helped sponsor many expeditions and research projects over the years, including:

The Society supports many socially-based projects including AINA, a Kabul-based organization dedicated to developing an independent Afghan media, which was founded by one of the Society's most famous photographers, Reza.

The Society sponsors the National Geographic Bee, an annual geographic contest for American middle-school students. More than four million students a year begin the geography competition locally, which culminates in a national competition of the winners of each state each May in Washington, D.C. Every two years, the Society conducts an international geography competition of competing teams from all over the world. The 2007 contest was held at Marineworld in San Diego, California with representatives from 18 international teams. The team from Mexico emerged as the winner. 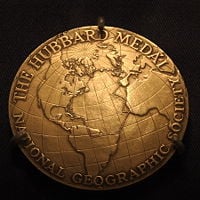 Past recipients of the award include; Polar explorers Roald Amundsen in 1907, Sir Ernest Shackleton in 1910 and Richard Byrd in 1926; aviators Charles Lindbergh in 1927 and Anne Morrow Lindbergh in 1934; anthropologists Louis and Mary Leakey in 1962; Apollo 11 astronauts Neil Armstrong, Edwin Aldrin and Michael Collins in 1970; anthropologist Richard Leakey in 1994; conservationist Jane Goodall in 1995; underwater explorer Robert Ballard in 1996; and balloonists Bertrand Piccard and Brian Jones in 1999, and posthumously in 2000 to Matthew Henson, who with Robert Peary led the 1909 American expedition to the North Pole.[7]