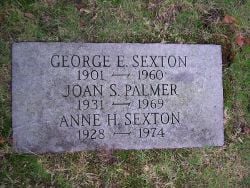 Anne Sexton (November 9, 1928 – October 4, 1974), born Anne Gray Harvey, was a modern American poet, children's author, and a playwright. She is best known for her poetry belonging to the confessional school of poets in the style of other neo-formalists such as George Starbuck, Sylvia Plath, John Berryman, and Theodore Roethke. Although, these poets, including Sexton, cannot always be categorized or limited by one type of form, they broke new ground by delivering prose that expressed their innermost dialog, with language that was provocative, and which veered away from romantic and standard forms of poetry. Sexton's poetry was characterized by incisive metaphors, unexpected rhythms, and precise wording that covered a spectrum of feelings that many people can relate to. Her poetry challenged the myths and superficial values subscribed to by the social status quo, while expressing her fears, anger, and struggle against mental illness.

Anne Gray Harvey was born in Newton, Massachusetts, the youngest of three daughters. Her father, Ralph Harvey, a successful woolen manufacturer, and mother, Mary Gray Staples, spent most of their lives near Boston. Her early life had the trappings of a financially comfortable existence in an upper middle class environment. In 1948, at the age of 19, she married Alfred Muller Sexton, known as “Kayo,” who later worked for her father’s textile business. She modeled for a time for Boston's Hart Agency. Before their divorce in the early 1970s, she had two children with Kayo: Linda Gray Sexton, later a novelist and memoirist, and Joyce Sexton. Her relationship with her daughters, complex yet joyful, was the basis for some of her poetry. Her eldest daughter, Linda, after her mother’s death, published Anne's letters and later works. Although her life seemed simple, suburban, and externally satisfying it would soon transform into something completely different for Sexton. After the birth of each daughter, in 1953 and 1955, she suffered from postpartum depression and was hospitalized at Westwood Lodge, a neuropsychiatric hospital where she would repeatedly return to for help. Birth and death were to be life events that would precipitate crises for Sexton.

Anne was encouraged by her psychiatrist, Dr. Martin Orne, to write poetry as a way to cope with her illness. In the fall of 1957, she attended a poetry workshop at Boston University taught by Robert Lowell, an established American poet. Lowell would later be thought of as a poet whose work gave rise to “Confessionalism.” One of her classmates was the aspiring poet Sylvia Plath. A close friend and collaborator that she met through another poetry workshop was Maxine Kumin. Through their long friendship they would offer support and critique each other’s work. Together they wrote four children's books. Sexton was to experience immediate success with her poetry and had pieces published in The New Yorker, Harper’s Magazine and The Saturday Review.

Sexton's poetic career was greatly influenced by her mentor, W. D. Snodgrass, a pioneer in the confessional style. His Pulitzer Prize winning collection of poems about a father's love for his daughter, titled Heart’s Needle, provided inspiration for the writing of her own piece called “Double Image.” This poem, written after her first breakdown and suicide attempt, describes the complexity of the mother/daughter relationship with her daughter and mother.

Her first book of poetry—and still thought of as one of her best—was To Bedlam and Part Way Back, published in 1960, which chronicles her experiences while being institutionalized and her subsequent road to recovery. The emotional content of these poems is controlled, yet lyrical, and follows the natural rhythm of language.

Her poetry was so popular in England that an edition of Selected Poems was published there as a Poetry Book Selection in 1964.

In 1967, at the height of her career, Sexton won the Pulitzer Prize for poetry for the book Live or Die. In 1969 she published Love Poems and saw her play Mercy Street produced off-Broadway. She was now a celebrity who traveled frequently, gave poetry readings, and taught workshops at Boston University, among other places.

Sexton has been called the quintessential Confessional poet for her soul- wrenching verse that addresses formerly taboo topics, such as neurosis and madness, through the medium of poetry. Although not considered a strictly feminist writer, she did speak to women's issues and opened the way further for the recognition and acceptance of female poets and their work. She preferred to think of herself as a "storyteller” rather than a “confessionalist.” If the goal of confessional poetry is to exorcise demons from the unconscious, then Anne Sexton was a master of the form. On the other hand, she was sometimes criticized for being narcissistic, exhibitionistic, and raw. Her work, both honest and anguishing, left no thoughts—however conflicted or horrendous—unexposed.

Anne Sexton, having a natural flair for the dramatic, often gave public readings of her poetry. She had a flamboyant persona when performing and would sometimes read aloud with her chamber rock group, Anne Sexton and Her Kind, performing the background music. She sometimes referred to herself as a “mad housewife” or a witch; an allegory often found in her works. The following is an excerpt from her poem, Her Kind that she often opened with when reading in public.

I have gone out, a possessed witch,
haunting the black air, braver at night;
dreaming evil, I have done my hitch
over the plain houses, light by light:
lonely thing, twelve-fingered, out of mind.
A woman like that is not a woman, quite.
I have been her kind.

The popularity of her book, Transformations established her as a dark poet. The following is an excerpt from the nursery tale parody Cinderella:

Cinderella and the prince
lived, they say, happily ever after,
like two dolls in a museum case
never bothered by diapers or dust,
never arguing over the timing of an egg,
never telling the same story twice,
never getting a middle-aged spread,
their darling smiles pasted on for eternity.
Regular Bobbsey Twins
That story

End of Life and posthumous works

The title for her eighth and final collection of poetry, The Awful Rowing Toward God, came from her meeting with a Roman Catholic priest who told her: "God is in your typewriter," which gave the poet the desire and willpower to continue living and writing for a while longer. In an interview over a year before her death she said that she had written the first drafts of The Awful Rowing Toward God in 20 days with "two days out for despair, and three days out in a mental hospital." Sexton sometimes attributed her spurts of creative writing to a trance like state that she entered where she lost track of time and of what was happening around her.

On October 4, 1974, Sexton had lunch with poet and friend, Maxine Kumin, to review the galleys for The Awful Rowing. That afternoon, without a note or any warning, she went into her garage, started the ignition of her car, and died of carbon monoxide poisoning.

In addition to The Awful Rowing, other posthumous collections of her poems include 45 Mercy Street (1976), and Words for Dr. Y (1978), both edited by her daughter Linda Gray Sexton. The publication of Sexton's work culminated in The Complete Poems: Anne Sexton published in 1981.

Despite remarkable literary successes, Sexton did not obtain a college (undergraduate) degree; however, she accumulated many honors such as the Frost Fellowship to the Bread Loaf Writers' Conference (1959), the Radcliffe Institute Fellowship (1961), the Levinson Prize (1962), the American Academy of Arts and Letters traveling fellowship (1963), the Shelley Memorial Prize (1967), and an invitation to give the Morris Gray reading at Harvard University. She was also awarded a Guggenheim Fellowship, Ford Foundation grants, honorary degrees, professorships at Colgate University and Boston University, and other distinctions.

The content of Sexton’s work is controversial, in and of itself, due to its sensitive subject matter; however, a posthumous controversy was created when Diane Middlebrook published Anne Sexton: A Biography in 1992. Sexton’s psychiatrist, with the permission of Linda Sexton, released the audio tapes from his private sessions with Sexton to Middlebrook so that she could access them for the writing of the biography. On one side of the controversy is the issue of doctor-patient confidentiality. There are those professionals in the field of psychiatry who feel that using the tapes was a breach of ethics. On the other side of the controversy is Diane Middlebrook, and some associates of Anne Sexton, who feel that being privilege to such personal information was in line with Anne Sexton's own thoughts about expressing, without reservation, one's innermost feelings. Diane Middlebrook defends the biography by saying, "The Sexton case is absolutely unique, in the importance of her therapy to the development of her art."

Retrieved from https://www.newworldencyclopedia.org/p/index.php?title=Anne_Sexton&oldid=1059521
Categories:
Hidden category:
This page was last edited on 30 October 2021, at 10:27.
Content is available under Creative Commons Attribution/Share-Alike License; additional terms may apply. See Terms of Use for details.