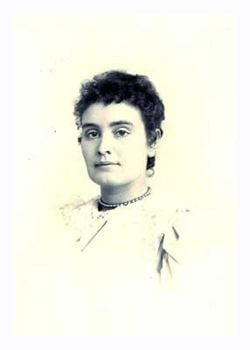 Anne Sullivan, Annie Sullivan, or Johanna Mansfield Sullivan Macy (April 14, 1866 – October 20, 1936) was a trailblazer in the field of education. Her teaching of Helen Keller changed the manner in which children with disabilities were educated. She was kind and compassionate and never believed anyone was a hopeless case. Samuel Clemens (Mark Twain) dubbed her a "miracle worker."

Anne Sullivan was born in Feeding Hills, Massachusetts. Her parents, Thomas Sullivan and Alice Clohessy, were poor Irish farmers who left Ireland in 1847 because of the Irish Potato Famine. Sullivan’s father was an alcoholic and sometimes abused her, but he also passed on to her Irish tradition and folklore. Her mother, suffering from tuberculosis, died when she was eight years old, and when she was ten, her father deserted her and her siblings, leaving them at the Massachusetts State Infirmary in Tewksbury. Sullivan spent all her time with her younger, crippled brother (who, like his mother, suffered from tuberculosis) in hopes that they would never be separated; however, Jimmie soon died in the infirmary.

When Sullivan was three years old she began having trouble with her eyesight; at age five, she contracted the eye disease trachoma, a bacterial disease that affects the eye and can often lead to blindness because of the scar tissue it creates. Sullivan underwent a long string of operations in attempts to fix her eyesight. Doctors in Tewksbury had made a few attempts to clean her eyelids, but these procedures did no good. Later, a Catholic priest and the chaplain of the nearest hospital, by the name of Father Barbara set out to correct her condition. He arranged a procedure at the hospital for her eyes. The doctors attempted to numb her eyes with cocaine before the procedure. This operation failed to correct her vision and more attempts were made. Father Barbara took her to the Boston City Infirmary this time where she had two more operations. After this attempt, her vision remained blurry and unchanged. Sullivan then returned to Tewksbury, against her will. After four years there, in 1880, she entered the Perkins School for the Blind where she underwent surgery and regained some of her sight. After regaining her eyesight and graduating as class valedictorian in 1886, the director of the Perkins School for the Blind, Michael Anagnos, recommended her to teach Helen Keller.

Anne began teaching Helen when she was six years old. Helen had been deaf and blind due to a severe illness since the age of nineteen months. Since that time Helen had become quite unmanageable for her parents, Kate and Arthur Keller. Having nowhere else to turn they had contacted inventor and educator of the deaf, Alexander Graham Bell in Washington, DC for help. Bell suggested taking Helen Keller to the Perkins School for the Blind.

Anne Sullivan relocated to Tuscumbia, Alabama on March 3, 1887. She immediately started teaching Keller sign language. Helen was by then a spoiled and unruly child that terrorized her family with frequent temper tantrums. Sullivan saw through Keller's anger and confusion, realizing her student was a very bright child who needed patience and discipline. Not wanting to crush the child's spirit, Sullivan got no support from Keller's family who refused to correct the child. Sullivan was granted permission to remove Keller from the main house and live alone with her in the nearby cottage where she could teach the child obedience. Through her early persistence, she helped Helen develop a vocabulary and demonstrate an ability to learn. Anne Sullivan would let Helen touch things and then she would spell what the object was into Helen Keller's hand. Touching raised letters was her way of reading. In order to learn how to write, Sullivan got her a specially-designed board, grooved so that a pencil could form letters on the paper placed over it. Many of Helen Keller's lessons were held outdoors. Sullivan realized that deaf-blind children could learn by using their three remaining senses of touch, smell, and taste.

Sullivan and Keller became well known due to letters Sullivan wrote to Michael Anagnos, director of the Perkins School for the Blind in Boston and Alexander Graham Bell. Both of these well-known men made Anne Sullivan's letters public in newspapers and school newsletters.

In 1888, they went to the Perkins Institution where Helen Keller began her formal studies. Later Keller attended New York City's Wright-Humasen School, then the Cambridge School for Young Ladies, and finally Radcliffe College. Helen Keller graduated from Radcliffe with honors in 1904.

In 1904, Anne Sullivan and Helen Keller bought a farm and seven acres of land together in Wrentham, Massachusetts. They lived in the house with Sullivan's husband, John Albert Macy. John was a Harvard professor that she met while Keller attended Radcliffe College. Macy helped edit Keller's biography The Story of My Life.

Unfortunately the marriage was constantly strained because of Sullivan's devotion to Helen Keller. John moved to Europe in 1914. While they never divorced, he appears to have faded from their lives as the years progressed. John Macy died in 1932 at the age of 55.

Anne Sullivan and Helen Keller traveled quite a lot in the following years. Sullivan's health slowly declined after Macy's death. On October 20, 1936, at the age of 70, Sullivan died in Forest Hills, New York, with Helen Keller at her side. Anne Sullivan was cremated and her ashes were interred in the National Cathedral in Washington, DC. She was the first woman to be given this honor on her own merits.

Anne Sullivan's teaching method was adopted by Sophia Alcorn, a teacher at the Kentucky School for the Deaf in Danville, Kentucky. Alcorn succeeded in teaching two young deaf-blind children, Tad Chapman and Oma Simpson, to speak. She named her method Tad-Oma after these two pupils. The children were taught to speak by touching their teacher's cheek and feeling vocal vibrations.

In June 1892, Anne Sullivan was elected a member of the American Association to Promote the Teaching of Speech to the Deaf. In 1894, Alexander Graham Bell asked her to give a speech at an association meeting. Bell was a strong force in Anne's life. He continuously encouraged her to continue her work.

During the early 1920s, Sullivan and Keller helped to publicize the new American Foundation for the Blind (founded 1921) and lobbied for its program of increased opportunities for the sightless.

The relationship between Anne Sullivan and Helen Keller was celebrated in the 1962 movie The Miracle Worker.

Retrieved from https://www.newworldencyclopedia.org/p/index.php?title=Anne_Sullivan&oldid=1059522
Categories:
Hidden category:
This page was last edited on 30 October 2021, at 10:29.
Content is available under Creative Commons Attribution/Share-Alike License; additional terms may apply. See Terms of Use for details.