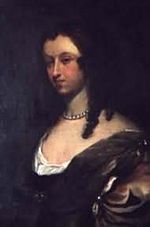 Aphra Behn (July 10, 1640 – April 16, 1689) was a prolific dramatist and novelist of the Restoration period who was arguably the first woman writer in English literary history to support herself entirely on her writings. Behn has become something of a folk-hero among literary-minded feminists and postmodernist literary scholars due to her unique role as one of the first truly successful female writers in Western history. Behn's resurgence into popularity is a recent phenomenon; for most of the centuries following her death she was largely obscure, even though during her lifetime she was the most frequently performed playwright in England except John Dryden. No doubt a large portion of Behn's renewed popularity is attributable to changes in the climate of literary criticism, and some critics—most notably the preeminent American critic Harold Bloom—view her works as second-rate. While it is undeniably true that the quality of Behn's prose is less perfected than that of some of her more famous colleagues in the English canon, it is also equally true that her works are more than mere pulp fiction. Behn's novel Oroonoko, in addition to being considered one of the earliest novels in the English language, is also the first major novel to address the critical issues of racism and colonialism that have dominated the civil politics of the recent century. Behn's Love-Letters Between a Noble-Man and his Sister is the earliest epistolary novel in existence, predating Richardson's more famous Pamela by more than half a century. Behn is important for much more than merely her gender, and although the fact that she was a successful female writer in her day and age is a notable accomplishment, the fact that she was a successful writer of talent, innovation, and insight is what has cemented her fame and influence.

Behn's biography appears to be unusually interesting and adventuresome, but unfortunately very little documentation has survived to the present day. Information regarding her life, and especially her early life, is scant, but she was almost certainly born in Wye, near Canterbury, on July 10, 1640, to Bartholomew Johnson, a barber, and Elizabeth Denham. Aphra's parents were married in 1638, and Aphra, or Eaffry, was baptized on December 14, 1640. Elizabeth Denham was employed as a nurse to the wealthy Culpepper family, who lived locally, which means that it is likely that Aphra grew up with and spent time with the family's children. The younger child, Thomas Culpepper, later described Aphra as his foster sister.

In 1663, Aphra visited an English sugar colony on the Suriname River, on the coast east of Venezuela, in a region later known as Suriname. During this trip, Aphra is supposed to have met an African slave leader, whose story formed the basis for one of her most famous works, the novel Oroonoko. The accuracy of the account of her journey to Suriname has often been called into question; however, enough evidence has been found that most Behn scholars today believe that the trip did indeed take place. 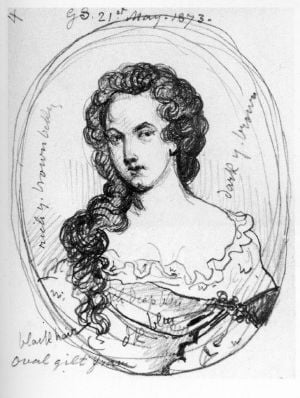 A sketch of Aphra Behn by George Scharf from a portrait believed to be lost.

Shortly after her return to England in 1664, Aphra married Johan Behn, who was a merchant of German or Dutch extraction. Little conclusive information is known about Aphra's marriage, but it did not last for more than a few years.

By 1666, Behn had become attached to the Court, possibly through the influence of Thomas Culpepper and other associates of high standing. The Second Anglo-Dutch War had broken out between England and The Netherlands in 1665, and Behn was recruited as a political spy to Antwerp by Charles II. Her codename for her exploits is said to have been Astrea, a name under which she subsequently published much of her writings. In Antwerp, Behn became the lover to a prominent and powerful royal whose identity remains unknown, and from him she obtained secrets that were used to the advantage of the English.

Behn's exploits as a spy were not very beneficial for her, however, as Charles was slow in paying for either her services or expenses while abroad. Money had to be borrowed for Behn to return to London, where a year's petitioning of Charles for payments went unheard, and she ended up in a debtor's prison. By 1669, an undisclosed source had paid her debts, and she was released from prison. Beginning from this point she became one of the first women who wrote for a living. She cultivated the friendship of various playwrights, and starting in 1670, wrote numerous plays, novels, poems and pamphlets. Her most popular works included The Rover, Love-Letters between a Noble-Man and his Sister, Oroonoko.

Aphra Behn died on April 16, 1689, and was buried in Westminster Abbey. Below the inscription on her tombstone read the words: "'Here lies a Proof that Wit can never be / Defence enough against Mortality." She was once quoted as stating that she had led a "life dedicated to pleasure and poetry."

After a period of obscurity in the nineteenth century, when both Behn and her works were dismissed as indecent, her fame has undergone extraordinary revival. She is a dominant figure in the movement within literary theory known as Cultural Studies, where she is studied both as a figure in her own right and as a producer of significant texts. The novelist Virginia Woolf famously wrote, "All women together, ought to let flowers fall upon the grave of Aphra Behn… for it was she who earned them the right to speak their minds." That sentiment has largely been what has motivated the resurgence in Behn's popularity: Her status as a cultural heroine who overcame enormous odds to become a successful writer despite her sex.

Today, the affinities between Behn's works and those of Romantic writers whom she predated by more than a century have particularly come to the foreground of critical discussion. In several volumes of writings by scholar Janet Todd, for instance, Behn's explorations of some of the key issues in Romantic studies, such as the correlations between racial and gender oppression, female subjectivity, and political agency are strikingly similar to the egalitarian ideals championed by such Romantic writers as William Blake and William Wordsworth. 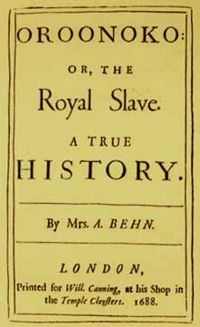 Oroonoko is a short novel published in 1688, less than a year before Aphra Behn's death. Now considered her masterpiece, the novel concerns the tragic love of its hero, an enslaved African in Suriname in the 1660s, and the first-person narrator's own experiences in the South American colony. Although Behn had written at least one novel previously, Oroonoko is both one of the earliest English novels and almost certainly the earliest by a woman.

Behn began to write the novel following her return from Antwerp. Charles II's refusal to pay her for her expenses as a spy resulted in Behn scrambling to find means of support. In the 1670s, she wrote numerous poems and plays, which earned her significant acclaim. For years, however, she continued to work at her material for Oroonoko, drawing from her personal experiences in Suriname.

Oroonoko is a relatively short novel whose full title is Oroonoko: Or, the Royal Slave. The novel concerns Oroonoko, the grandson of an African king, who falls in love with Imoinda, the daughter of that king's top general.

The king, too, falls in love with Imoinda. He commands that Imoinda become one of his wives. After unwillingly spending time in the king's harem, Imoinda and Oroonoko plan a tryst with the help of the sympathetic Onal and Aboan. However, they are discovered, and because of her choice, the king has Imoinda sold as a slave. Oroonoko is then tricked and captured by an evil English slave captain. Both Imoinda and Oroonoko are carried to Suriname, at that time an English colony. The two lovers are reunited there, under their new Christian names of Caesar and Clemene, even though Imoinda's beauty has attracted the unwanted desires of the English deputy-governor, Byam.

Oroonoko organizes a slave revolt. The slaves are hunted down by the military forces and compelled to surrender on Byam's promise of amnesty. However, when the slaves surrender, Oroonoko is whipped. To avenge his honor, and to express his natural worth, Oroonoko decides to kill Byam. To protect Imoinda from punishment following the assassination, Imoinda and Oroonoko agree to a suicide pact. Oroonoko's love forbids him from killing his beloved, but he stabs her anyway, and she dies with a smile on her face. Oroonoko is found mourning by her body and is publicly executed. After his death, the Dutch seize control of the colony and deal with the uprising by mercilessly slaughtering the slaves.

The novel is written in an unusual mixture of first and third person, as the narrator relates actions in Africa and portrays herself as a witness to actions that take place in Suriname. In the novel, the narrator presents herself as a lady who has come to Suriname with her unnamed father, a man scheduled to be the new deputy-governor of the colony. He, however, dies on the voyage from England. The narrator and her family are put up in the finest house in the settlement, in accord with their station, and the narrator's experiences of meeting the indigenous peoples and slaves are intermixed with the main plot of the love of Oroonoko and Imoinda. At the conclusion of the love story, the narrator leaves Suriname for London.