Aphid, or plant louse, is the common name for minute, mostly soft-bodied, plant-feeding insects in over 4000 species comprising the superfamily Aphidoidea in the order Hemiptera. Sometimes known as greenfly or blackfly, these insects have specially modified mouthparts (mandibles and maxillae), called stylets, adapted to suck phloem sap from vascular plants. They often gather in large colonies and have complex life cycles.

Some aphid species can be serious plant pests. They can stunt plant growth, transmit viruses between plants, foster growth of molds and fungi, and deform parts of the plant (leaves, buds, flowers), causing, for example, leaf curl. The aphids sometimes induce the formation of galls, proliferations and modifications of plant tissues that protect the aphids. Among important commercial crops in which they can spread disease or otherwise cause harm are grains, potatoes, cabbage, sugarbeet, citrus, and apples, and trees such as alders, beeches, and conifers.

An underlying harmony in nature is seen in some of the symbiotic relationships in which aphids are involved. Some species of ants have a mutually beneficial relationship (mutualism) with aphids in order to "milk" the aphids for honeydew, a sweet substance secreted by the aphids and prized as food by the ants. Ants protect the aphids from weather conditions and enemies and transport them to plants for feeding; in turn, the ants obtain honeydew from the aphids. Some aphids also provide habitat for endosymbiotic bacteria that synthesize some essential amino acids absent from the aphids' diet.

Aphids comprise the Aphidoidea superfamily, with typical aphids in the Aphididae family. Aphidoidea is classified within Hemiptera, an order of insects, comprising around 80,000 species of cicadas, aphids, planthoppers, shield bugs, and others, collectively known as the "true bugs." The defining feature of hemipterans is their possession of mouthparts where the mandibles and maxillae have evolved into a proboscis, sheathed within a modified labium to form a "beak" or "rostrum," which is capable of piercing tissues (usually plant tissues) and sucking out the liquids—typically sap. The name "Hemiptera" is from the Greek hemi ("half") and pteron ("wing"), referring to the forewings of many hemipterans, which are hardened near the base, but membranous at the ends.

Aphidoidea traditionally was placed in the suborder Homoptera within Hemiptera. Recent classification within the Hemiptera has changed the old term "Homoptera" to two suborders: Sternorrhyncha (aphids, whiteflies, scales, psyllids, etc.) and Auchenorrhyncha (cicadas, leafhoppers, treehoppers, planthoppers, etc.). More recent reclassifications have resulted in a substantial rearrangement of the constituent families with the Aphidoidea, with some old families reduced to subfamily rank (e.g., Eriosomatidae), and numerous old subfamilies elevated to family rank.

About 4,000 species of aphids are known, classified in about 10 families. They are quite minute, varying in size from 1-10 millimeters long. Many species are green, and thus the name greenfly.

Aphids tend to have soft bodies with long, thin legs, two-jointed, two-clawed tarsi, and usually a pair of cornicles—abdominal tubes through which a waxy secretion is exuded.

Aphids have two compound eyes and two ocular tubercles made up of three lenses, each of which is located behind and above the compound eyes.

Aphids contain sucking mouthparts called stylets. These are modified mandibles and maxillae that form a feeding tube which can pierce plant tissues (stems, leaves, roots) and allow it to suck sap from the phloem.

Aphids are distributed worldwide, but they are most common in temperate zones. It is possible for aphids to migrate great distances (mainly through passive dispersal, riding on winds) depending on the weather patterns; for example, the lettuce aphid spreading from New Zealand to Tasmania (Courtney 2005). They have also been spread by human transportation of infested plant materials. 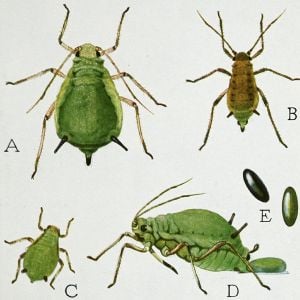 Many, but far from all, aphids are monophagous (i.e. feeding only on one species of plant). Others, like Myzus persicae, feed on hundreds of plant species across many families.

Similarly to related families, aphids passively feed on sap from phloem vessels in plants. As the plant keeps this sap under high pressure, once a phloem vessel is punctured, it is forced into the aphid's food canal.

When host plant quality becomes poor or is crowded, female aphids will produce winged offspring that can disperse to other food sources.

Around 250 species are serious pests for agriculture and forestry as well as an annoyance for gardeners. As they feed, aphids often transmit plant viruses to their food plants. These viruses can sometimes kill the plants. Some aphid infestations cause leaf curl, whereby the feeding of a colony of aphids on the underside of a lead can cause a downward curl. Other problems include the loss of sap and stunting of plant growth, the deforming of leaves and flowers, the growth of molds and fungi on the honeydew secreted by the aphids, and the coating of the surface with honeydew. Aphids used chemicals to induce the formation of galls, proliferations, and modifications of plant tissues. In order to form galls, the insects must seize the time when plant cell division occurs at a high speed, the growing season, and select the specific places where plant cell division occurs, the meristems. These galls may protect the larvae until fully grow. 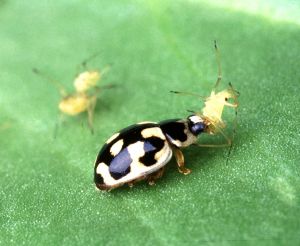 Some larger insects feed on aphids, acting as an ecological control, as do some fungi. Important natural enemies of aphids include the predatory ladybirds/ladybugs/ladybeetles (Coleoptera: Coccinellidae), hoverfly larvae (Diptera: Syrphidae), and lacewings (Neuroptera: Chrysopidae), and entomopathogenic fungi like Lecanicillium lecanii and the Entomophthorales. 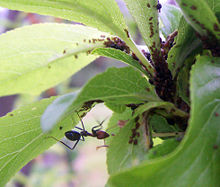 Some species of ants "farm" aphids, protecting them on the plant they eat, and eating the honeydew that the aphids secrete. This is a mutualistic relationship. Consisting of incompletely digested but concentrated plant sap, aphid honeydew is rich in carbohydrates, a product of the aphids ingesting an excess of the sap. In return for this benefit, the ants sometimes will transport aphids to plants for feeding, protect their eggs in their nests, and protect them from weather and enemies.

Many aphids are host to endosymbiont bacteria, Buchnera, which live in specialized cells called bacteriocytes inside the aphid. These bacteria synthesize some essential amino acids that are absent in the phloem that the aphids eat (Douglas 1998).

Aphids are known for having unusual reproductive adaptations. The life cycle varies according to the species and can be quite complex, including cyclical parthenogenesis.

In cyclical parthenogenesis, a typical aphid life cycle, only wingless females are present in the population for several generations, typically in the spring and summer. Reproduction is typically parthenogenetic (asexual reproduction) and viviparous. Females undergo a modified meosis that results in eggs that are genetically identical to their mother (parthenogenetic). The embryos develop within the mothers ovarioles, and give live birth to 1st instar nymphs (viviparous). Aphids typically live from 20-40 days and thus undergo multiple parthenogenetic, viviparous generations each summer. In the fall, a change in photoperiod and temperature cause females to parthenogenetically produce sexual females and males. The males are genetically identical to their mothers except they have lost one sex chromosome. Sexual females and males mate and females lay eggs that will develop outside of the mother. Thus in the fall, aphids undergo sexual, oviparous reproduction. The aphids will overwinter as eggs and hatch out as females in the following spring.

Aphids have been known to have what is called telescoping generations. The parthenogenetic, viviparous female aphid will have a daughter within her who is already parthenogenetically producing its own daughter at the same time. This leads to the situation where the diet of a female aphid can have inter-generational effects on the body size and birth rate of aphids. In other words, what the aphid eats can directly change the size and fertility of the aphid's daughters and granddaughters (Nevo and Coll 2001; Jahn et al. 2005).

The following brief summary of what takes place in the plant louse of the rose, Aphis rosae, may be regarded as typical of the family, though exceptions occur in other species. Eggs produced in the autumn by fertilized females remain on the plant through the winter, hatching in the spring to give rise to female individuals, which may be winged or wingless. From these, females are born parthenogenetically; that is, they are born without the intervention of males, and by a process that has been compared to internal budding—large numbers of young are produced resembling their parents in every respect except size. These, in turn, reproduce their kind in the same way. This process continues throughout the summer, with generation after generation being produced until the number of descendants from a single individual of the spring-hatched brood may amount to many thousands. In the autumn, winged males appear and union between the sexes takes place and the females lay the fertilized eggs that are destined to carry the species through the cold months of winter. If, however, the food-plant is grown in a glasshouse or greenhouse, where protection against cold is afforded, the aphids may go on reproducing agamogenetically (asexually) without cessation for many years.

Likewise, in warm and tropical areas or during the growing season, aphids reproduce asexually without interruption. Since the young can become adults and reproduce within a few days, this process leads to the build-up of very large populations responsible for severe damage to crops and important economic losses; such populations often require pest control. 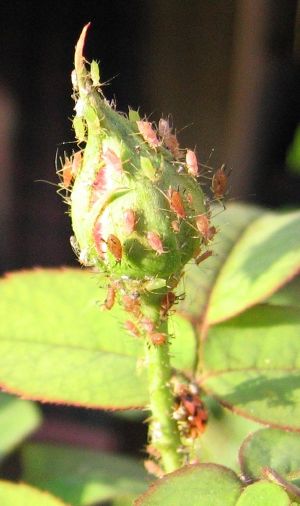 Aphids feeding on a rose bud, in the background lady beetle can be seen

Not the least interesting features connected with this unique life history are the facts that the young may be born by oviparous or viviparous methods and either gamogenetically or agamogenetically; they may develop into winged forms or remain wingless; and males only appear in any number at the close of the season. Although the factors that determine these phenomena are not clearly understood, it is believed that the appearance of the males is connected with the increasing cold of autumn and the growing scarcity of food, and that the birth of winged females is similarly associated with decrease in the quantity or vitiation of the quality of the nourishment imbibed. Sometimes the winged females migrate from the plant they were born on to start fresh colonies on others, often of quite a different kind (host plant alternancy). Thus the apple aphid (Aphis mali), after producing many generations of apterous females on its typical food-plant, gives rise to winged forms which fly away and settle upon grass or corn-stalks. 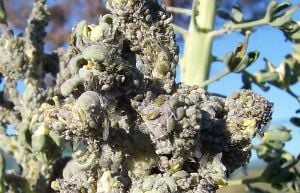 Aphid infestation on broccoli plant. Note that most of the aphids one sees in a plant infestation are juveniles.

Aphids probably first appeared around 280 million years ago, in the Carboniferous period. The oldest known aphid fossil is one of the species Triassoaphis cubitus from the Triassic period. There were relatively few species of aphids at that time, and the number of species only considerably increased since the appearance of angiosperms (flowering plants) 160 millions of years ago. This is due to the fact that angiosperms provided an occasion for aphids to become specialized.

Aphids have not always looked like they do currently. Organs like the cauda or the siphunculi did not evolve until the Cretaceous.