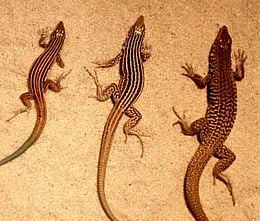 The asexual whiptail species Cnemidophorus neomexicanus (center) consists exclusively of females who reproduce via parthenogenesis. C. neomexicanus is flanked by the sexually reproducing species that hybridized to generate it: C. inornatus (left) and C. tigris (right).

Parthenogenesis is part of the wide diversity of adaptations found in nature, securing the perpetuation of the lineage of organisms. Reproduction not only secures the individual purpose of the species survival, but also provides organisms for food chains. Most animals that engage in parthenogenesis also utilize sexual reproduction or sexual behaviors, reflecting the near universal mode of this form of reproduction among eukaryotes.

Parthenogenesis (which is derived from the Greek words for "virgin" and "creation") is more efficient than sexual reproduction because it does not always involve mating behaviors, which require energy and usually incur risks. Moreover, all members of an asexual population are capable of reproducing. The disadvantage, however, is that asexual reproduction, unlike its sexual counterpart, does not generate genotypic diversity, which is important for adapting to abiotic and biotic environmental changes.

In addition to its reproductive role, parthenogenesis functions as part of a mechanism for determining sex in some species. In ants and most species of bees and wasps, females develop from unfertilized eggs and are referred to as haploid (possessing one set of chromosomes), while males develop from fertilized eggs and hence are diploid (possessing two sets of chromosomes, one from each parent). Thus, in species also capable of sexual reproduction, parthenogenesis can help to regulate the relative number of males and females in a population.

In some species, parthenogenesis requires a sexual act to trigger development of the egg, even though this behavior does not fertilize the egg. In parthenogenic ticks and mites, for example, the eggs develops only after the animals have mated, but the eggs remain unfertilized. Some species of beetles that have no males require sperm to trigger development; these beetles mate with males of closely related species. However, the sperm does not contribute genetic material.

In other parthenogenic species lacking males, females stimulate each other to activate the neuroendocrine mechanisms necessary for egg maturation. This phenomenon has been extensively studied in the New Mexico whiptail (genus Cnemidophorus), of which 15 species reproduce exclusively by parthenogenesis. One female plays the role of the male in closely related species, and mounts the female that is about to lay eggs. This behavior is due to the hormonal cycles of the females, which cause them to behave like males shortly after laying eggs, when levels of progesterone are high, and to take the female role in mating before laying eggs, when estrogen dominates. Lizards that act out the courtship ritual have greater fecundity than those kept in isolation, due to the increase in hormones that accompanies the mounting. So, although the populations lack males, they still require sexual stimuli for maximum reproductive success.

Parthenogenesis involves the inheritance and subsequent duplication of only a single sex chromosome. The unfertilized egg can thus be male or female depending on the chromosomal scheme of the species:

In eusocial animals that engage in reproductive specialization, parthenogenesis can be a means of regulating the relative number of females and males in the group. One well-known example is the honeybee: Most females in the colony are sterile workers, but a few become fertile queens. After the queen mates, she possesses a supply of sperm that she controls, enabling her to produce either fertilized or unfertilized eggs. Thus, the queen determines when and how much of the colony’s resources are expended on the production of males (called drones).

The repercussions of self-fertilization in sharks, which reduces the genetic diversity of the offspring, is a matter of concern for shark experts, taking into consideration conservation management strategies for this species, particularly in areas where there may be a shortage of males due to fishing or environmental pressures. Unlike Komodo dragons, which have a WZ chromosome system and produce male (ZZ) offspring by parthenogenesis, sharks have an XY chromosome system, so they produce only female (XX) offspring by parthenogenesis. As a result, sharks cannot restore a depleted male population through parthenogenesis, so an all-female population must come in contact with an outside male before normal sexual reproduction can resume.

Parthenogenesis is distinct from artificial animal cloning, a process in which the new organism is identical to the cell donor. Parthenogenesis is truly a reproductive process that creates a new individual or individuals from the naturally varied genetic material contained in the eggs of the mother. However, in animals with an XY chromosome system where parthenogenic offspring (called parthenogens) are female, the offspring of a parthenogen all are genetically identical to each other and to the mother, as a parthenogen is homozygous (possessing two identical sets of genes).