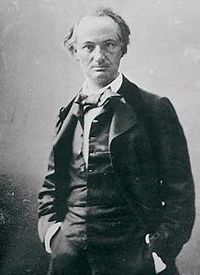 Charles Pierre Baudelaire (April 9, 1821 – August 31, 1867) was one of the most influential French poets and critics of the nineteenth century, although largely unrecognized during his lifetime. Baudelaire's realistic imagery and use of symbols, metaphors, and "correspondences" inspired the French Symbolist movement of the late-nineteenth and early twentieth-centuries. He was an early advocate of "art for art's sake," the defining principle of the Aesthetic (and later the Decadent) movement, and a reaction to the prevailing understanding of the role of the arts to enlighten and improve human life.

Baudelaire's most important work, Les Fleurs du mal (Flowers of Evil), with its provocative themes of sex, decay, death, and spiritual and moral anomie, was labeled obscene by the French government and Baudelaire was prosecuted for offenses against religion and public decency. As the title of the work suggests, Baudelaire believed that every aspect of experience was the proper subject for artistic inquiry, and that evil and vice were potent and overlooked sources of beauty and order. His inclusive and undiscriminating perspective would profoundly influence later modernist writers.

Baudelaire's works were rooted in his Catholic background and his conception of humanity doomed by original sin, yet without salvation. His poetry is an elegiac expression of spiritual despair, a vision in which "evil is done without effort, naturally, it is the working of fate, [while] good is always the product of an art." Love particularly, in Baudelaire's poetry, is depicted as dark and purely sensuous; in "The Journey," man is "a gluttonous, lewd tyrant," a "slave of a slave," while his imagery of women is often carnal and cruel.

Baudelaire's own life mirrored his art. He became addicted to opium and contracted syphilis as an early age and once stated that "after examining scrupulously the depths of my past reveries, I realized that I have always been obsessed by the impossibility of understanding some of man's actions or thoughts, save by the hypothesis of the intervention of some exterior evil force." Reflecting on the miseries of opium addiction, he concluded that man cannot interfere in "the primordial conditions of his existence" without grave consequences and that drug-induced euphoria destroyed the "precious substance" of the will.

In addition to his career as a poet, Baudelaire is remembered as "the father of modern criticism." Baudelaire was active in the world of visual arts, corresponding closely with a number of influential French painters, among them Eugene Delacroix. Baudelaire was also a translator, and he introduced the works of Edgar Allen Poe—whom Baudelaire considered to be a kindred spirit—to a French-speaking audience with translations that are still considered classic. Baudelaire's influence on French art and literature was unrecognized in his own life, but it is now generally agreed that he is one of the most influential figures in all of nineteenth-century French letters.

Baudelaire was born in Paris. His father, a senior civil servant and an amateur artist, died in 1827. The following year his mother married a lieutenant colonel named Aupick, who later became a French ambassador to various courts. Baudelaire was educated in Lyon and at the Collège Louis-le-Grand in Paris. After gaining his degree in 1839 he decided to embark upon a literary career, and for the next two years led a somewhat irregular life. It is believed he contracted syphilis about this time. To straighten him out, his legal guardians sent him on a voyage to India in 1841. Baudelaire jumped ship, however, in the Caribbean, an experience which would change his life. Although Baudelaire only lived in the tropics for a matter of months, his poetry would return again and again to images of tropical paradise. When he returned to Paris, after less than a year's absence, he was of age and could receive his inheritance. However, in a year or two his extravagance threatened to bankrupt him, and his family obtained a decree to place his property in trust. It is in this period that he met Jeanne Duval, a mulatto woman who was to become his longest romantic association.

His art reviews of 1845 and 1846 attracted immediate attention for the boldness with which he propounded his views: many of his critical opinions were novel in their time, but have since been generally accepted. He took part with in the Revolution of 1848, and for some years was interested in republican politics, although his political views remain ambiguous. Regardless, during this time of political upheaval Baudelaire devoted himself to his writing. He was a slow and fastidious worker, and it was not until 1857 that he produced his first and most famous volume of poems, Les Fleurs du mal (The Flowers of Evil). The poems found a small but appreciative audience, but greater public attention was given to their subject matter. The principal themes of sex and death were considered scandalous, and the book became a by-word for unwholesomeness among mainstream critics of the day. Baudelaire, his publisher, and the printer were successfully prosecuted for creating an offense against public morals, and Les Fleurs du mal remained banned in France until 1949. In the poem "Au lecteur" ("To the Reader") that prefaces Les fleurs du mal, Baudelaire argues that there should be poems for the vulgar things in life just as there are poems for the sacred:

… If rape or arson, poison, or the knife
Has wove no pleasing patterns in the stuff
Of this drab canvas we accept as life—
It is because we are not bold enough!

Six of the most scandalous poems in the volume were suppressed, but printed later as Les Épaves ("The Wrecks") in Brussels, 1866. Another edition of Les fleurs du mal, without these poems, but with considerable additions, appeared in 1861.

Baudelaire had learned English in his childhood, and Gothic novels, such as Matthew Gregory Lewis's The Monk, became some of his favorite reading matter. In 1846 and 1847, he became acquainted with the works of Edgar Allan Poe, in which he found tales and poems which had, he claimed, long existed in his own brain but never taken shape. From this time until 1865 he was largely occupied with his translations of Poe's works, which were widely praised. These were published as Histoires extraordinaires ("Extraordinary stories") (1852), Nouvelles histoires extraordinaires ("New extraordinary stories") (1857), Aventures d'Arthur Gordon Pym ("The Narrative of Arthur Gordon Pym"), Eureka, and Histoires grotesques et sérieuses ("Grotesque and serious stories") (1865). Two essays on Poe are to be found in his Oeuvres complètes ("Complete works") (vols. v. and vi.).

Meanwhile his financial difficulties increased, particularly after his publisher, Poulet Malassis, went bankrupt in 1861, so, in 1864 he left Paris for Belgium, partly in the hope of selling the rights to his works. During these troubled times he began experimenting with opium, and in Brussels Baudelaire began to drink to excess. He suffered a massive stroke in 1866 and paralysis followed. The last two years of his life were spent in "maisons de santé" in Brussels and in Paris, where he died on August 31, 1867. Many of his works were published posthumously.

He is buried in the Cimetière du Montparnasse, Paris.

Baudelaire produced a relatively small body of poetry. Nonetheless, his influence on later poets has been immense. His poetry became popular with the French Symbolists, who viewed him almost as their patron saint; he also was a major influence on a number of poets in the English-speaking world, among them Ezra Pound and Elizabeth Bishop.

His poetry is characterized by its deeply structured imagery and repeated symbols. Les Fleurs du mal infamously returns to the same images again and again: images of tropical islands, insane women, and rotting corpses. The pungency of Baudelaire's imagery, and his unwillingness to flinch from explicit descriptions, has given him a reputation as a decadent poet. Yet his poems are meant for more than shock-value. They are meant to do nothing less than to present a complete portrait of the poet's mind, however depraved or corrupted, because—as Baudelaire argues—only by creating poetry that is inclusive of everything can poetry truly become all-encompassing, self-enclosed, and hence, beautiful. His revealing poem "Destruction," from Les Fleurs du mal suggests the poet's insouciant interest in illicit experience and sensation:

Besides Les Fleurs du mal, Baudelaire published relatively few poems. He was devastated by the poor reception of Les Fleurs du mal; he had envisioned it as the perfect example of his poetic thinking, and when it failed to achieve acclaim, Baudelaire devoted most of his energies to other types of writing, such as translating Poe. He spent decades on that project as well as writing for various periodicals. However, he would continue to write occasional poems, and towards the end of his life he published one poem, "The Swan," which many critics consider to be his greatest single work. Baudelaire's later poems show a degree of restraint and maturity lacking in the excesses of Les Fleur du mal. More than one critic has lamented that had Baudelaire continued writing poetry, he might have held an even greater place in the poetic pantheon.

Charles Baudelaire is among the most important French writers of the nineteenth century, rivaling in his impact on modern poetry that of Gustave Flaubert upon the novel. Influenced by but transcending the Romanticism of Victor Hugo, who showed a similar interest in the street life of Paris, Baudelaire explored the unbounded experience of the self in an urban environment in the throes of the Industrial Revolution. Baudelaire's defiant genius probed taboo aspects of life and examined the psychological and moral complexity of modern man decades before writers such as Arthur Rimbaud, Paul Verlaine, and Stéphane Mallarmé.

A poet of intense, visceral power, Baudelaire prompted later writers to eschew moral judgments and thus elevate art and technique above moral and ethical concerns. Later writers would find sanction in Baudelaire to dwell on ever more sinister and depraved aspects of the human condition. Modern preoccupation with the self in poetry, fiction, theater, film, and visual arts can be traced to the lonely figure of Baudelaire, alienated from community and unmoored from moral and religious restraint.

His life was burdened with debts, misunderstanding, illness, and excesses, and his work unremittingly reflects inner despair. But the originality and boldness of his poetry, prose, criticism, and translations have influenced the modern conception of the artistic enterprise to the present day.

Retrieved from https://www.newworldencyclopedia.org/p/index.php?title=Charles_Baudelaire&oldid=1003102
Categories:
This page was last edited on 2 February 2017, at 20:41.
Content is available under Creative Commons Attribution/Share-Alike License; additional terms may apply. See Terms of Use for details.