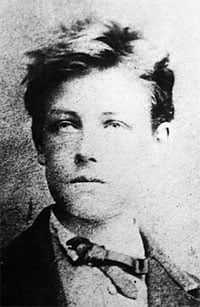 Jean Nicolas Arthur Rimbaud (October 20, 1854 – November 10, 1891) was one of the most notable symbolist poets of mid-to-late nineteenth century France. Rimbaud was a literary prodigy, who devoured massive amounts of literature at a very early age, and by the time he was sixteen, was already writing poems of extremely high quality that are still well regarded by literary critics today.

Rimbaud's poetry is notable for its highly experimental, revolutionary style. At the age of seventeen, Rimbaud had a series of visionary experiences that led to increasingly mystical and surreal poetry, eschewing the traditional forms of rhyme and meter which he had already mastered. These almost hallucinatory poems would be a major inspiration for the French Symbolist poets of Rimbaud's time, including Paul Valery and Stephane Mallarme.

Rimbaud is often credited with bringing free verse into the foreground of European poetry. Although he was considered shocking and even scandalous for his flagrant homosexual affairs, notably as a teenager with the married poet Paul Verlaine, Rimbaud's precocious talent and body of works have been a major and lasting influence on French literature for over a century.

Rimbaud's rejection of bourgeois values and notions of morality in art also anticipated much modernist literature. Later writers, from Jean Genet to Louis-Ferdinand Céline and Henry Miller, as well as lesser writers, have used literature to depict and often effectively celebrate degraded aspects of human behavior. "Morality is the weakness of the brain," Rimbaud had once written. Rejecting his Catholic upbringing, Rimbaud had urged, "No more gods! no more gods! Man is King, Man is God!"

Adding to his mystique, Rimbaud abandoned poetry by the age of 21 and traveled widely before settling in Ethiopia, far beyond the artistic and social horizons of the European intelligentsia.

Arthur Rimbaud was born into the rural middle class of Charleville (now part of Charleville-Mézières), in the Ardennes département, in northeastern France. As a boy, Rimbaud was a restless but brilliant student. By the age of fifteen, he had won many prizes and composed original verses and dialogues in Latin.

When Rimbaud was six years old, his father left to join his military regiment in Cambrai and never returned, perhaps irritated by domestic life and parental obligations. Rimbaud was then raised by his Catholic mother, in a strict religious household.

Fearing that her children were spending too much time with and were therefore being influenced by neighbouring children of the poor, Mme Rimbaud moved her family to the Cours d'Orléans in 1862. This location was quite improved from their previous home and whereas the boys were previously taught at home by their mother, they were then sent, at the ages of nine and eight, to the Pension Rossatr. For the five years that they attended school, however, their formidable mother imposed her will upon them, pushing for scholastic success. She would punish her sons by making them learn a hundred lines of Latin verse by heart and if they gave an inaccurate recitation, she would deprive them of meals. He disliked schoolwork and his mother's continued control and constant supervision; the children were not allowed to leave their mother's sight, and, until the boys were sixteen and fifteen respectively, she would walk them home from the school grounds. 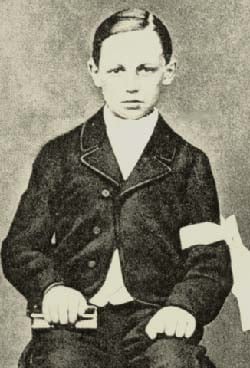 Rimbaud at the time of his First Communion.

When he was eleven, Rimbaud had his First Communion; then an ardent Catholic like his mother, his reading was confined almost entirely to the Bible, but he also enjoyed fairy tales and stories of adventure such as the novels of James Fenimore Cooper and Gustave Aimard. He became a highly successful student and was head of his class in all subjects but sciences and mathematics. Many of his schoolmasters remarked upon the young student's ability to absorb great quantities of material. In 1869, he won eight first prizes in the school, including the prize for Religious Education, and in 1870, he won seven firsts.

When he had reached the third class, Mme Rimbaud hired a tutor, Father Ariste Lhéritier, for private lessons. Lhéritier succeeded in sparking the young scholar's love of Greek and Latin as well as French classical literature. He also encouraged the boy to write original verse in both French and Latin. Rimbaud's first poem to appear in print was "Les Etrennes des orphelines" ("The Orphans' New Year's Gift"), which was published in the Revue pour tous's January 2, 1870 issue.

In 1870, his new teacher, Georges Izambard, became Rimbaud's first literary mentor, and his original verses in French began to improve rapidly. He frequently ran away from home and may have briefly joined the Paris Commune of 1871, which he portrayed in his poem, L'Orgie parisienne ou Paris se repeuple (The Parisian Orgy or Paris Repopulates). Shortly afterward, he became an anarchist, started drinking, and amused himself by shocking the local bourgeois with his shabby dress and long hair. At the same time, he wrote to Izambard and Paul Démeny about his method for attaining poetical transcendence or visionary power through a "long, immense and rational derangement of all the senses" (Les lettres du Voyant).

Rimbaud sent the eminent French poet Paul Verlaine a letter containing several samples of his work. Rimbaud returned to Paris on Verlaine's invitation in late September 1871, residing briefly in Verlaine's home. Verlaine promptly became infatuated with the sullen, blue-eyed, precociously brilliant adolescent. They became lovers and led a dissolute, vagabond-like life rocked by absinthe and hashish. They scandalized the Parisian literary elite by their outrageous behavior, and for many years Rimbaud was as famous for his debauchery as he was for his poetry. Throughout this period, he continued to write strikingly visionary, modern verses, the most notable of which is most likely the poem "Le Bateau ivre," considered by many to be Rimbaud's finest poem in his surreal, visionary style. The poem begins as follows:

Rimbaud's and Verlaine's stormy homosexual relationship took them to London in 1872, after Verlaine left his wife and infant son. In July 1873, Rimbaud, feeling increasingly guilty and fearing Verlaine's rages, committed himself to flee to Paris. Infuriated, Verlaine shot Rimbaud, one of the two shots striking him in the left wrist. Rimbaud considered the wound superficial, at first not pressing charges against Verlaine. After this violent attack Verlaine and his mother accompanied Rimbaud to a Brussels train station, where "Verlaine behaved as if he were mad," and Rimbaud had him arrested.

Rimbaud eventually withdrew the complaint, but the judge sentenced Verlaine to two years in prison. Rimbaud returned home to Charleville and completed his Une Saison en Enfer (A Season in Hell), a lengthy prose-poem inspired by his experiences, and widely regarded both as one of the pioneering instances of modern Symbolism and a description of his life with Verlaine, whom he called his "pitoyable frère" ("pitiful brother"). In 1874, he returned to London with the poet Germain Nouveau and assembled his controversial Illuminations, which includes the first two French poems in free verse.

Rimbaud and Verlaine met for the last time in March 1875, in Stuttgart, Germany, after Verlaine's release from prison and his conversion to devout Catholicism. By then Rimbaud had given up writing and decided on a steady, working life; some speculate he was feeling contrition over his former wild living, while others suggest he sought to become rich and independent to afford living one day as a carefree poet and man of letters.

He continued to travel extensively in Europe, mostly on foot. In the summer of 1876, he enlisted as a soldier in the Dutch Army to travel free of charge to Indonesia where he promptly deserted, returning to France by ship. He traveled to Cyprus and in 1880, finally settled in Aden as a main employee in the Bardey agency. In 1884, he quit the job at Bardey's and became a merchant on his own in Harar, Ethiopia. He made a small fortune as a gun-runner.

Rimbaud developed right knee synovitis which degenerated into a carcinoma, and the state of his health forced him to return to France on May 9, 1891, where his leg was amputated on May 27. Rimbaud died in Marseille on November 10, 1891, at age 37.