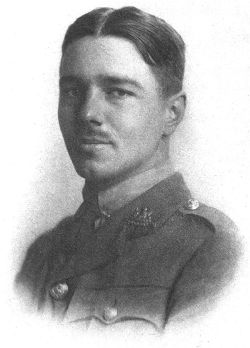 Wilfred Edward Salter Owen (March 18, 1893 – November 4, 1918) was an English poet of the early twentieth century who is often esteemed to be the greatest war poet of World War I. He wrote dark and deeply ironic poems of the shocking realities of war, often composing poems while in the trenches themselves. Owen devoted himself to his dual callings as a poet and a military officer, and ultimately he would lose his life leading an offensive just a week before the close of the war.

Owen's poetry was striking for its time, not only for its bitterly realistic content, but for its numerable innovations to form. Owen is considered one of the first poets in English to pioneer and popularize the use of half-rhyme and assonance as a substitute for more traditional full-rhymes.

Influenced by John Keats as well as by his close friend and fellow-poet Siegfried Sassoon, Owen's poems provide a glimpse into the horrors and chaos of World War I with the perspective of a man who saw it all first-hand. As a recorder of a major moment in history, and as one of the most moving and heart-rending poets of his era, Owen is, despite his brief life and small output, one of the most important authors of the early twentieth century.

Of mixed English and Welsh ancestry, Owen was born the eldest of four children at Plas Wilmot, a house near Oswestry in Shropshire, on March 18, 1893. At that time, his parents, Tom and Susan Owen, lived in a comfortable house owned by his grandfather, but upon his death in 1897, the family was forced to move to lodgings in the back streets of Birkenhead. Owen was educated at the Birkenhead Institute and at Shrewsbury Technical School, and discovered his vocation in 1903 or 1904 during a holiday spent in Cheshire. Owen was raised as an Anglican of the evangelical school. His early influences included John Keats, and, as with many other writers of the time, the Psalms of the Bible.

Shortly after leaving school in 1911, Owen passed the matriculation exam for the University of London, but not with the first-class honors needed for a scholarship. In return for free lodging and some tuition for the entrance exam, Owen worked as lay assistant to the Vicar of Dunsden and as a pupil-teacher at Wyle Cop School. Prior to the outbreak of World War I, he worked as a private tutor at the Berlitz School in Bordeaux, France.

On October 21, 1915, Owen enlisted in the Artists' Rifles. For the next seven months, he was in training at Hare Hall Camp in Essex. In January 1917, he was commissioned as a second lieutenant with The Manchester Regiment. After some traumatic experiences, which included leading his platoon into the Battle of the Somme and getting trapped for three days in a shell-hole, Owen was diagnosed as suffering from shell shock and sent to Craiglockhart War Hospital in Edinburgh for treatment. It was while recuperating at Craiglockhart that he was to meet fellow poet, Siegfried Sassoon, an encounter which was to transform Owen's life.

In July of 1918, Owen returned to active service in France, though he might have stayed on home-duty indefinitely. His decision was almost wholly the result of Sassoon's being sent back to England. Sassoon, who had been shot in the head, was put on sick-leave for the remaining duration of the war. Owen saw it as his poetic duty to take Sassoon's place at the front, so that the horrific realities of the war might continue to be told. Sassoon was violently opposed to the idea of Owen's returning to the trenches, threatening to "stab [him] in the leg" if he tried it. Aware of his attitude, Owen did not inform him of his action until he was once again in France.

Owen was killed in action on November 4, 1918, during the crossing of the Sambre-Oise Canal, only a week before the end of the war. His mother received the telegram informing her of his death on Armistice Day, as the church bells were ringing out in celebration. He is buried at Ors Communal Cemetery.

Owen is regarded by many as the leading poet of the First World War, known for his harrowing poems on the horrors of trench and chemical warfare. Siegfried Sassoon had a profound effect on Owen's poetic voice, and Owen's most famous poems (“Dulce et Decorum Est” and “Anthem for Doomed Youth”) show direct results of Sassoon's influence. Manuscript copies of the poems survive, annotated in Sassoon's handwriting.

Prior to meeting Sassoon, Owen's poetry was primarily influenced by the Romantic poet John Keats: it was flowery, beautiful, and technically masterful, but lacking in any grounding in the elements of the real world. Sassoon inspired Owen to change directions and write poetry that drew directly from first-hand experience. Sassoon's emphasis on realism and writing from experience were not ideas unheard of to Owen, but it was not a style of which he had previously made use. Nevertheless, Owen's poetry is quite distinctive, and he is generally considered a greater poet than Sassoon.

Owen's poetry would eventually be more widely acclaimed than that of his mentor. Owen's use of half-rhyme, with its heavy reliance on consonance, was innovative; though he was not the only poet at the time to utilize these particular techniques, Owen is often believed to be the first poet to make half-rhyme widely popular in English-language poetry. “Dulce et Decorum Est,” one of Owen's most famous war poems and quite possibly the most famous war poem in the English language, gives a very vivid example of Owen's harrowingly realist style. The title and the poem's ending couplet are derived from a line from Horace, Dulce et decorum est pro patria mori, which translates as "It is sweet and proper to die for one's country." An excerpt of Owen's poem reads as follows:

Gas! Gas! Quick, boys!–An ecstasy of fumbling,
Fitting the clumsy helmets just in time;
But someone still was yelling out and stumbling
And flound'ring like a man in fire or lime...
Dim, through the misty panes and thick green light,
As under a green sea, I saw him drowning.

In all my dreams, before my helpless sight,
He plunges at me, guttering, choking, drowning.

If in some smothering dreams you too could pace
Behind the wagon that we flung him in,
And watch the white eyes writhing in his face,
His hanging face, like a devil's sick of sin;
If you could hear, at every jolt, the blood
Come gargling from the froth-corrupted lungs,
Obscene as cancer, bitter as the cud
Of vile, incurable sores on innocent tongues,–
My friend, you would not tell with such high zest
To children ardent for some desperate glory,
The old Lie: Dulce et decorum est
Pro patria mori.

Thousands of poems were published during the war, but very few of them had the benefit of such strong patronage. In addition to Sassoon's influence, he received support from Edith Sitwell. His poems were edited into a new anthology in 1921 by Edmund Blunden. Then, in the 1960s there was a revival of interest that plucked him out of a relatively exclusive readership into the public eye.

Few realize that Owen never saw his own work published, apart from those poems he included in The Hydra, the magazine he edited at the Craiglockhart War Hospital.

Retrieved from https://www.newworldencyclopedia.org/p/index.php?title=Wilfred_Owen&oldid=1088789
Categories:
Hidden category:
This page was last edited on 23 November 2022, at 19:46.
Content is available under Creative Commons Attribution/Share-Alike License; additional terms may apply. See Terms of Use for details.