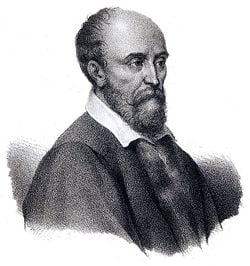 Pierre de Ronsard, commonly referred to as Ronsard (September 11, 1524 – December, 1585), was a French poet referred to by his own generation as the "prince of poets." Ronsard is largely responsible for the revitalization of Classicism in French poetry; he was the founder of La Pléiade, an influential group of poets and other artists who deliberately imitated the classical poetry of Greek and Latin literature. In addition, Ronsard is also responsible for popularizing the twelve-syllable alexandrine line as the standard meter for French verse, a form which would endure for over 400 years. Ronsard is easily one of the most influential French poets of all time, as his influence on the form and style of French verse would remain significant for centuries, well into the nineteenth century.

His family is said to have come from the predominantly Romanian provinces to the north of the Danube River. The poet's father was named Louys de Ronsard, and his mother was Jeanne de Chaudrier, of a family not only noble but well connected. Pierre was the youngest son. Loys de Ronsard was maître d'hôtel du roi to Francis I of France.

The future "Prince of Poets" was educated at home for some years and sent to the Collège de Navarre in Paris when he was nine years old. When Madeleine of France was married to James V of Scotland, Ronsard was attached to the king's service, spending three years in Britain. On returning to France in 1540, he was again taken into the service of the Duke of Orléans.

In this service he had other opportunities of travel; he was sent to Flanders and again to Scotland. After a time a more important employment fell to his lot; he was attached as secretary to the suite of Lazare de Baïf, the father of his future colleague in the La Pléiade.

His apparently promising diplomatic career was cut short by an attack of deafness which no physician could cure, so he determined to devote himself to study. Ronsard's period of study occupied seven years, during which time he read all the Greek and Latin poetry available in print at the time. Following his period of study, Ronsard was determined to begin a new literary movement inspired by the Greek and Latin classics, which was to become La Pléiade. The first manifesto of this new literary movement, announcing the intention to apply to the vernacular the principles of criticism and scholarship learned from the classics, came not from him but from Du Bellay. The Defense et illustration de la langue française appeared in 1549, and the Pléiade (or Brigade, as it was first called) may be said to have been then launched. It consisted of seven writers whose names are sometimes differently enumerated, though the orthodox canon is beyond doubt composed of Ronsard, Du Bellay, Baïf, Remy Belleau, Pontus de Tyard, Étienne Jodelle the dramatist, and Jean Daurat. Ronsard's own work came a little later, purported after a trick of Du Bellay's which at last determined him to publish. Some single and minor pieces, an epithalamium on Antoine de Bourbon and Jeanne de Navarre (1550), a "Hymne de la France" (1549), an "Ode a la Paix," preceded the publication in 1550 of the four first books ("first" is characteristic and noteworthy) of the Odes of Pierre de Ronsard. Ronsard's odes, which were directly inspired by Horace, would prove to be instrumental in the re-popularization of the ode form in Western literature.

The volume of odes was followed in 1552 by the publication of his Amours de Cassandre with the fifth book of Odes dedicated to the 15-year-old Cassandre Salviati, whom he had met at Blois, following her to her father's Château de Talcy. These books excited a violent literary quarrel. Clement Marot was dead, but his influence remained strong with some of the competing schools of literary thought in France, some of whom were deeply opposed to the Pléiade and its outspoken contempt of merely vernacular and medieval forms and its strenuous advice to French poetry to "follow the ancients."

Ronsard's popularity in his own time was overwhelming and immediate, and his prosperity was unbroken. He published his Hymns, dedicated to Margaret of France, Duchess of Berry, in 1555; the conclusion of the Amours, addressed to another heroine, in 1556; and then a collection of Œuvres completes, said to be due to the invitation of Mary Stuart in 1560; with Elégies, mascarades et bergeries in 1565.

The rapid change of sovereigns did Ronsard no harm. Charles IX, King of France, who succeeded his brother after a very short time, was even better disposed toward him than Henry and Francis. Charles gave him rooms in the palace, regarding him constantly as his master in poetry. During this period Ronsard's work was considerable but mostly occasional. His lone work of magnitude, the Franciade (1572), was a rather feeble imitation of Virgil's Aeneid, and never finished.

The death of Charles made little difference in the court favor which Ronsard enjoyed, but, combined with his increasing infirmities, it seems to have determined him to quit court life. During his last days he lived chiefly at a house which he possessed in Vendôme, the capital of his native province, or at his abbey at Croix-Val in the same neighborhood, or else at Paris, where he was usually the guest of Jean Galland, well known as a scholar at the College de Boncourt. It seems also that he had a town house of his own in the Fauhourg Saint-Marcel. On the other hand, he received not merely gifts and endowments from his own sovereign but presents from many others, including Elizabeth I of England. Mary, Queen of Scots, who had known him earlier, addressed him from her prison, and the famed Italian poet Torquato Tasso consulted him on the Gerusalemme.

His last years were, however, saddened not merely by the death of many of his most intimate friends, but by constant and increasing ill-health. This did not interfere with his literary work in point of quality, for he was rarely idle, and some of his latest work is among his best. But he indulged the temptation of constantly altering his work, and many of his later alterations are by no means for the better. Towards the end of 1585 his condition of health grew worse and worse, and he seems to have moved restlessly from one of his houses to another for some months. When the end came, which, though in great pain, he met in a resolute and religious manner, he was at his priory of Saint-Cosme at Tours, and he was buried in the church of that name on Friday, December 27.

The character and reception of Ronsard's works are among the most remarkable in literary history, and supply in themselves a kind of illustration of the progress of French literature. It was long his fortune to be almost always extravagantly admired or violently attacked. At first, as has been said, the enmity, not altogether unprovoked, of the friends and followers of Marot fell to his lot, then the still fiercer antagonism of the Huguenot faction, who, happening to possess a poet of great merit in Du Bartas, were able to attack Ronsard for purely political reasons. After his death Classicism fell deeply out of favor with the French literary public. When Classical poetry began to regain popularity, it was the works of Pierre Corneille and his contemporaries rather than the works of the Pléiade which reigned supreme.

By then Ronsard was forgotten when he was not being sneered at, except by a few men of taste, like Jean de La Bruyère and François Fénelon. In this condition he remained during the whole eighteenth century and the first quarter of the nineteenth. The Romantic revival, attracted by his splendid diction, rich metrical faculty, and combination of classical and medieval peculiarities, adopted his name as a kind of battle-cry, and for the moment exaggerated his merits somewhat. The critical work, however, first of Charles Augustin Sainte-Beuve in his Tableau de la littérature francaise au 16ème siècle, and since of others, has established Ronsard pretty securely in his right place, a place which may be defined in a few sentences:

Ronsard was the acknowledged chief of the Pléiade and its most voluminous poet. He was probably also its best. He did not introduce the sonnet into France, but he practised it very soon after its introduction and with admirable skill—the famous "Quand vous serez bien vieille" being one of the acknowledged gems of French literature. His odes, which are very numerous, are also very interesting and in their best shape are nearly perfect compositions of a very difficult form. Ronsard began by imitating the strophic arrangement of the ancients, but very soon had the wisdom to desert this for a kind of adjustment of the Horatian ode to rhyme, instead of exact quantitative meter. In this latter kind he devised some exquisitely melodious rhythms unique to sixteenth-century French verse. Generally speaking, Ronsard is best in his amorous verse (the long series of sonnets and odes to a number of women, including Cassandre, Marie, Genévre, Héléne—Héléne de Surgeres, a later and mainly "literary" love.) He also excels in his descriptions of the country (the famous "Mignonne allons voir si la rose," the "Fontaine Bellerie," the "Forêt de Gastine," among others), which have an extraordinary grace and freshness. In short, Ronsard shows eminently the two great attractions of French sixteenth century poetry as compared with that of the two following ages: magnificence of imagery, and graceful variety of meter.

The chief separately published works of Ronsard are noted above. He produced, however, during his life, a vast number of separate publications, some of them mere pamphlets or broadsheets, which from time to time he collected, often striking out others at the same time, in the successive editions of his works. Of these he himself published seven—the first in 1560, the last in 1584. Between his death and the year 1630 ten more complete editions were published, the most famous of which is the folio of 1609. A copy of this presented by Sainte-Beuve to Victor Hugo, and later in the possession of Maxime du Camp, has a place of its own in French literary history. The work of Claude Binet in 1586, Discours de la vie de Pierre de Ronsard, is very important for early information, and the author seems to have revised some of Ronsard's work under the poet's own direction.

From 1630 Ronsard was not again reprinted for more than two centuries. Just before the close of the second, however, Sainte-Beuve printed a selection of his poems to accompany the above-mentioned Tableau (1828). There are also selections, Choix de poésies - publiées par A. Noël (in the Collection Didot) and Becq de Fouquières. In 1857 Prosper Blanchemain, who had previously published a volume of Œuvres inédites de Ronsard, undertook a complete edition for the Bibliothéque Elzévirienne, in eight volumes. It is practically complete; a few pieces of a somewhat free character which are ascribed with some certainty to the poet are, however, excluded. A later and better edition still is that of Marty-Laveaux (1887-1893), and another that of Benjamin Pifteau (1891).