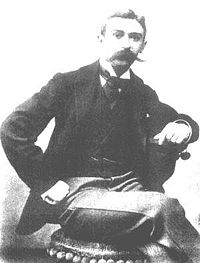 Pierre de Frédy, Baron de Coubertin (January 1, 1863 – September 2, 1937) was a French pedagogue and historian, better known as the “Father of the Olympics." Coubertin was active in many sports and regarded sports as playing an essential role in the development of character. He also believed that world peace would be furthered through sports competitions.

He was the primary force in the revival of the Olympic Games in 1896, nearly 1,500 years after the closing of the original games in Athens. As "le Renovateur" (the reviver) of the Olympic Games, Pierre de Coubertin influenced the entire world, bringing people of all nations, races, and cultures closer together in a common pursuit of excellence in sports.

Pierre de Coubertin was born in Paris, France, on January 1, 1863, into an aristocratic family. He was the third child of Charles Louis de Frédy and Agathe-Gabrielle de Mirville. He spent many of his summers in the family Château de Mirville, near Le Havre in Normandy, from where his family originated. His father and mother, an artist and a musician, tried to raise their children with a noble spirit, and had instilled in young Pierre the importance of education.

Coubertin refused the military or political career that was planned for him by his family. Instead he involved himself with education, making a determination to revive the French educational system. He believed that education was the key to the future of society.

Coubertin was an active sportsman, practicing several different sports, including boxing, fencing, horse-riding, rugby, and rowing. He believed that sport was essential for the development of human character, and that through sportsmanship one develops one’s moral energy. He thus saw sport as an important part of the personal development of young people and regarded it as a core part of the general educational strategy for France.

Coubertin was inspired by his visits to German, British, and American colleges and universities, where he witnessed physical education as a constituent part of school activities. He became particularly fond of rugby and was the referee of the first ever French championship rugby union final on March 20, 1892, between Racing Club de France and Stade Français.

His attempts to introduce educational reforms and generate greater interest in physical education and sport were met with little enthusiasm in France. However, he continued to work toward his goal, and in 1890, founded a sports organization, Union des Sociétés Francaises de Sports Athlétiques (USFSA). He never achieved any greater success in educational reforms.

Birth of the idea of Olympics 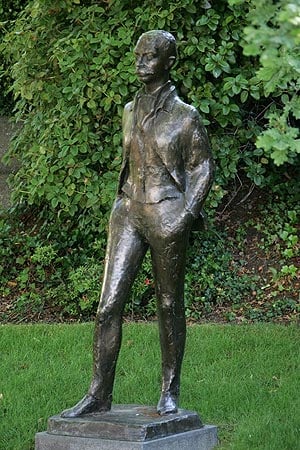 Coubertin envisioned an international competition to promote athletics. A growing interest in the ancient Olympic Games, fed by the archaeological finds at Olympia, gave birth to a plan to revive the ancient games. At a meeting of the Union des Sports Athlétiques in Paris in 1892, Coubertin openly declared his plan:

Let us export our oarsmen, our runners, our fencers into other lands. That is the true Free Trade of the future; and the day it is introduced into Europe the cause of Peace will have received a new and strong ally. It inspires me to touch upon another step I now propose and in it I shall ask that the help you have given me hitherto you will extend again, so that together we may attempt to realize, upon a basis suitable to the conditions of our modern life, the splendid and beneficent task of reviving the Olympic Games.[1]

His plan at first inspired little enthusiasm, since Coubertin was not the first who had proposed such an idea. Before him, philanthropists Evangelis Zappas, in 1859, and William Penny Brookes, in 1860, had tried to organize something that looked like the Olympics. They failed to propagate their ideas and it had never evoked much interest. Coubertin was the first who had connections and who was persistent enough to follow his plan through and raise it to the international level.

Beginning of the Olympics 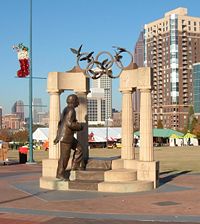 Despite initial skepticism, Coubertin managed to assemble 79 delegates from nine countries to attend an international congress, held on June 23, 1894, at the Sorbonne University in Paris. Among others, the attendees were from Belgium, Great Britain, France, Greece, Italy, Russia, Spain, Sweden, and the United States. The congress had a goal of the re-establishment of the ancient Olympic Games.

The congress led to the establishing of the International Olympic Committee (IOC), of which Coubertin became the general secretary, with the task of organizing the games. It was also decided that the first modern Olympics would take place in Athens, Greece, and that they would be held every four years. Demetrious Vikelas from Greece was selected to be the first president of the IOC. The 1896 Olympic Games proved a success, and Coubertin took over the IOC presidency when Vikelas stepped down after the first games.

Coubertin believed that world peace could be promoted through the Olympic Games:

Despite its initial success, the Olympic Movement faced hard times, as the 1900 Olympics in Paris, and 1904 Games in St. Louis, were both overshadowed by World's Fairs, and received little attention. In addition, political problems, such as the U.S. team's refusal to lower the Star and Stripes before the King of England, confirmed fears that the spirit of the Games would became tainted by nationalism.

This changed for the better after the 1906 Summer Olympics, and the Olympic Games grew to become the most important sports event in the world. Coubertin created the modern pentathlon for the 1912 Olympics.

During World War I, Coubertin became disillusioned in the possibility of world peace, as he saw young people dying in the trenches. He even applied, at the age of 53, to serve in the French Army, but was declined.

After the war, Coubertin and his family, wife and two children, moved to their new villa, Mon Ropes in Lausanne, Switzerland. Coubertin subsequently stepped down from his IOC presidency after the 1924 Olympics in Paris, which proved much more successful than the first attempt in that city in 1900. He was succeeded as president by Henri de Baillet-Latour of Belgium.

In 1936, he was nominated for the Nobel Peace Prize, but did not receive it.

Coubertin remained Honorary President of the IOC until he died of a stroke in 1937, in Geneva, Switzerland. He was buried in Lausanne (the seat of the IOC), although his heart was buried separately in a monument near the ruins of ancient Olympia.

Pierre de Coubertin is considered the father of the modern Olympic Games. He designed the symbol of the Olympics—the five interlocking rings. He also developed the Olympic Charter and Protocol, including the procedures for the opening and closing ceremonies which are still used today. In addition, he wrote the athlete's oath.

The Pierre de Coubertin medal (also known as the True Spirit of Sportsmanship medal) is an award given by the International Olympic Committee to those athletes that demonstrate the spirit of sportsmanship in the Olympic Games. The Pierre de Coubertin medal is considered by many athletes, spectators, and the International Olympic Committee to be the highest honor that an Olympic athlete can receive, even greater than a gold medal.