From New World Encyclopedia
Jump to:navigation, search
Previous (A. A. Milne)
Next (A. J. Ayer) 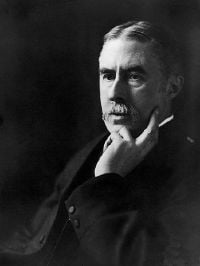 Alfred Edward Housman (March 26, 1859 – April 30, 1936), usually known as A. E. Housman, was an English poet and classical scholar, now best known for his cycle of poems, A Shropshire Lad. Housman was a consummate student of literature, and his knowledge of Latin poetry in particular was unequalled by any other scholars or poets of his time. Perhaps because of his deep knowledge of the Latin classics, as well as his general reclusiveness, Housman's poetry does not resemble much of the Romantic, Victorian, and Modernist poetry of his age. In contrast to the verbal flourish of poets like Swinburne and Tennyson, Housman's poetry is crisp and clear. He attained an unusual amount of popularity during his lifetime, and his poetry remains popular and accessible to this day.

Unlike many other poets of the late nineteenth and early twentieth century, Housman was also not given over easily to sentiment and optimism; he took a pessimistic, ironical view of human nature that, in hindsight, makes Housman's poetry much less objectionable to contemporary readers than that of his often too idealistic contemporaries, and seems to reflect the cultural pessimism of his period. Frequently compared to Robert Frost for his use of irony and natural imagery, Housman remains a major force in turn-of-the-century English poetry.

Housman was born in Fockbury, Worcestershire, the eldest of seven children of a country solicitor. His brother Laurence Housman and sister Clemence Housman also became writers.

Housman was educated first in King Edward's School, then in Bromsgrove School where he acquired a strong academic grounding and won prizes for his poetry. In 1877 he won an open scholarship to St. John's College, Oxford, where he studied classics. He was a brilliant student but a withdrawn person, whose only friends were his roommates Moses Jackson and A. W. Pollard. Housman fell in love with the handsome, athletic Jackson who, as a heterosexual, rejected him, though the two remained friends. This experience, reflected in some of his poems, may explain Housman's unexpected failure in his final exams (the "Greats") in 1881. Housman took this failure very seriously but managed to take a pass degree the next year, after a brief period of teaching in Bromsgrove School.

After graduating, Jackson got a job as a clerk in the Patent Office in London and arranged a job there for Housman as well. They shared an apartment with Jackson's brother Adalbert until 1885 when Housman moved in to lodgings of his own. Moses Jackson married and moved to Ceylon in 1887 and Adalbert Jackson died in 1892. Housman continued pursuing classical studies independently, publishing scholarly articles on such authors as Horace, Propertius, Ovid, Aeschylus, Euripides and Sophocles. He gradually acquired such a high reputation that in 1892 he was offered the professorship of Latin at University College London, which he accepted.

Although Housman's sphere of responsibilities as professor included both Latin and Greek, he put most of his energy in the study of Latin classics. His reputation in this field grew steadily, and in 1911 he took the Kennedy Professorship of Latin at Trinity College, Cambridge, where he remained for the rest of his life. During 1903-1930, he published his critical edition of Manilius's Astronomicon in five volumes. He also edited works of Juvenal (1905) and Lucan (1926). Many colleagues were afraid of his scathing critical attacks on those whom he found guilty of a lack of scholarly rigor. To his students he appeared as a severe, reticent, remote authority figure.

Housman always found his true vocation in classical studies and treated poetry as a secondary activity. He never spoke about his poetry in public until 1933 when he gave a lecture, "The Name and Nature of Poetry,” in which he argued that poetry should appeal to emotions rather than intellect. He died two years later in Cambridge. His ashes are buried near St. Laurence's Church, Ludlow, Shropshire.

During his years in London, Housman completed his cycle of 63 poems, A Shropshire Lad. After several publishers had turned it down, he published it at his own expense in 1896, much to the surprise of his colleagues and students. At first the book sold slowly, but Housman's nostalgic depiction of brave English soldiers struck a chord with English readers and his poems became a lasting success. World War I would further increase his popularity. Several composers, Arthur Somervell first among them, found inspiration in the seeming folksong-like simplicity of the poems.

Housman was surprised by the success of A Shropshire Lad because, like all his poetry, it is imbued with a deep pessimism, with no place for the consolations of religion or hope. Set in a half-imaginative pastoral Shropshire, "the land of lost content" (Housman, in fact, wrote most of the poems before ever visiting the place), the poems explore themes like the fleetingness of love and the decay of youth in a spare, uncomplicated style which many critics of the time found out of date compared with the exuberance of some Romantic poets. Housman himself acknowledged the influence of the songs of William Shakespeare, the Scottish Border Ballads and Heinrich Heine, but specifically denied any influence of Greek and Latin classics in his poetry.

In the early 1920s, when Moses Jackson was dying in Canada, Housman wanted to assemble his best unpublished poems together so that Jackson could read them before his death. These later poems, most of them written before 1910, show a greater variety of subject and form than those in A Shropshire Lad but also a certain lack of the kind of consistency found in the earlier poems. He published them as his Last Poems (1922) because he thought that his poetic inspiration was running out and that he would not publish any more poems in his lifetime—an intuition which would be born out.

Housman's most familiar poem is surely "When I was one-and-twenty," number XIII from A Shropshire Lad:

WHEN I was one-and-twenty

I heard a wise man say,

‘Give crowns and pounds and guineas

But not your heart away;

Give pearls away and rubies

But keep your fancy free.’

But I was one-and-twenty,

No use to talk to me.

When I was one-and-twenty

I heard him say again,

'The heart out of the bosom

Was never given in vain;

’Tis paid with sighs a plenty

And sold for endless rue.’

And I am two-and-twenty,

This poem is a good example of the style and melancholy tone of the whole collection. Many of its poems dwell on mortality, such as Poem LV:

WITH rue my heart is laden

For golden friends I had,

For many a rose-lipt maiden

And many a lightfoot lad.

By brooks too broad for leaping

The lightfoot boys are laid;

The rose-lipt girls are sleeping

In fields where roses fade.

Poem XXVII, "Is my team ploughing?," is a dialogue between a dead youth and a friend who has survived him. The dead youth asks "Is my girl happy/That I thought hard to leave/And is she tired of weeping/As she lies down to eve?" The living replies "Ay, she lies down lightly/She lies not down to weep/Your girl is well contented/Be still, my lad, and sleep." As the reader has begun to suspect, two stanzas later the living man acknowledges "I cheer a dead man's sweetheart/Never ask me whose."

Poem LXII, "Terence, this is stupid stuff," is a dialogue in which the poet, asked for "a tune to dance to" instead of his usual "moping melancholy" verse, offers, rather ironically, the respite of drunkenness as a way to inure oneself to the pain of existence—"Malt does more than Milton can/To justify God's ways to man."

The uniform style and tone of A Shropshire Lad make it an easy target for parody, and Housman was himself aware this his simple, folk-like poems were out of step with the literary trends of his times. Nevertheless, because of their simplicity and clarity, A Shropshire Lad has remained timeless, and it is easily one of the most popular poetic sequences of recent history. Housman's style is piercing and plain—a remarkable feat for a poet who was so profoundly aware of the history of the literary tradition—and his poems are among the most emotionally moving of the early twentieth century. Here, for instance, is Housman's heartrending "To An Athlete Dying Young":

To an Athlete Dying Young

The time you won your town the race
We chaired you through the market-place;
Man and boy stood cheering by,
And home we brought you shoulder-high.

Today, the road all runners come,
Shoulder-high we bring you home,
And set you at your threshold down,
Townsman of a stiller town.

Smart lad, to slip betimes away
From fields where glory does not stay
And early though the laurel grows
It withers quicker than the rose.

Eyes the shady night has shut
Cannot see the record cut,
And silence sounds no worse than cheers
After earth has stopped the ears:

Now you will not swell the rout
Of lads that wore their honors out,
Runners whom renown outran
And the name died before the man.

So set, before its echoes fade,
The fleet foot on the sill of shade,
And hold to the low lintel up
The still-defended challenge-cup.

And round the early-laureled head
Will flock to gaze the strengthless dead,
And find unwithered on its curls
The garland briefer than a girl’s.

Retrieved from https://www.newworldencyclopedia.org/p/index.php?title=A._E._Housman&oldid=1044094
Categories:
This page was last edited on 16 October 2020, at 19:44.
Content is available under Creative Commons Attribution/Share-Alike License; additional terms may apply. See Terms of Use for details.